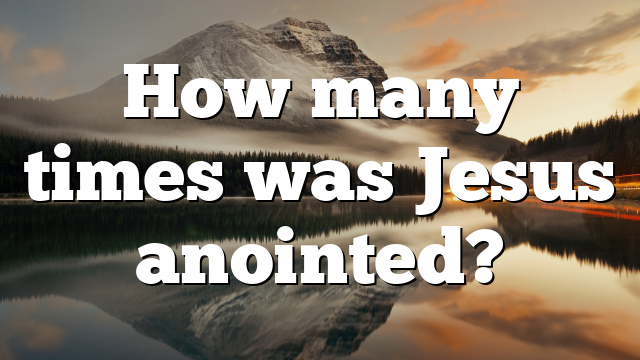 The anointing of Jesus in Luke 7:37-38 took place in the house of a Pharisee called Simon, probably in Capernaum, but definitely in Galilee, long before Jesus went to Jerusalem for the last time.In John 12:2 Jesus was visiting his close friends in Bethany six days before the Passover. Mary anointed his feet. The expensive perfume had a standard price of 300 denarii. Judas was upset at this “waste”. Jesus accepted it as a preparation for burial.He reminded his disciples that they would always be able to assist the poor, but they would not have him with them for long.Matt 26:7 and Mark 14:3 are parallel passages and describe the same event, but different from the one in John 12. This time Jesus and the disciples were having dinner in another home belonging to a now healed former leper, also called Simon. (An extremely common name, just like Mary). It was four or five days after Mary anointed the feet of Jesus. This time his head was anointed. At the first anointing Judas was upset.Now, when it happens again, the other disciples are also upset. But Jesus accepted it a sa second preparation for his burial. In Jewish thought and customs, two witnesses are important. Now two different women have made a prophetic reference to his soon forthcoming death and burial. They wanted to honour him and show their love for him apparently without knowing that he would soon die and be buried.There are clear differences and similarities between these two last anointings during the last week. The similarities are easily explained by a standard price for such a jar of ointment as well as the disciples’ lack of understanding of the forthcoming death of Jesus. They did not have much money, and they expected to stay with Jesus for a longtime, so the money could have been put to better use. Although Jesus had told them that he was going to die, they could not grasp that idea for the Messiah.The differences are impossible to explain without accusing the gospel writers of inaccuracies. They took place in different houses on different days by different women anointing different parts of the body of Jesus.