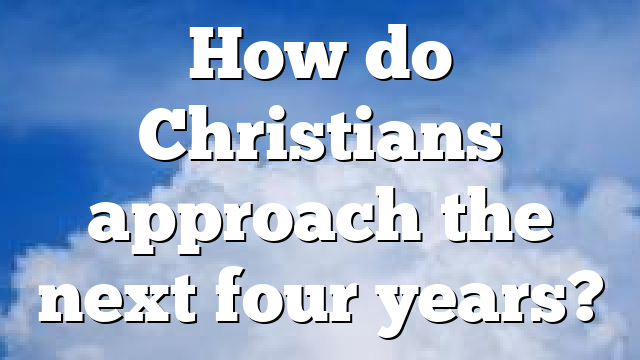 The question now is (since it seems all the prophets missed the mark) “how do Christians approach the next four years”? Biden will call for unity tomorrow, but what he means is you must support his agenda, including his abortion, gender and immigration policies.

Here’s some thought’s on Christians and “passive resistance”:

Reconsider your position on forced patriotic rituals – stay seated for the national anthem (start now since they are going to change it to what has been called the “Black National Anthem” as you don’t want look racists by seating after the change). The national anthem does not dated back to the revolutionary war (yes, it was a poem from the War of 1912), but playing it and everybody standing did not really start until the beginning of the last century, almost 150 years after the revolution.

Consider not saying the pledge of alliance to the flag, especially if they take “one nation under God” out. Also, the fact is, the pledge no longer reflects the asperation of unity and liberty proposed by the new administration. If you’re state’s righter or one of those who want to see their state secede from the union, why would continue to commit to the pledge (which by the way does not date back to the Revolution).

Examine what not church/religious charities to you give to, as many (like the United Way) are on board the the administrations agenda.

Don’t worry about buying America, as the people running the country sure are not committed to this policy.

Only volunteer for you church ministries, as picking up trash on the highway or volunteering for other government programs increase the power of the paid government officials at you expense.

If you look at how Wilson used patriotisms in WWI, you can see how liberal politicians have controlled the “masses” by creating a “religion” of country. I know these ideas will go against the grain of many, but with the government getting ready to put us in re-education camps, please don’t want until they come to take you out of your homes to do something.

FacebookTwitterSubscribe
Subscribe to receive all news to your email or phone: [wysija_form id="1"]
approachchristiansfourhownextthetheologyyears

5 JESUS Facts on the Moon Landing

1. Aldrin took Communion aboard the Eagle lunar lander. When Aldrin first floated the idea of celebrating Communion during the Apollo 11 mission to…