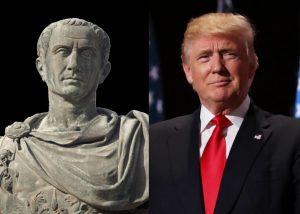 “HONOR THE EMPEROR…” If you’re a Christ follower who allows a steady diet of Fox News or MSNBC political opinion to shape your thoughts, words and tone of voice, think again… Reading through the Bible and absorbing its Divinely inspired counsel keeps us on the right path in thoughts, words, tone of voice both spoken and written. Consider the Apostle Peter…

The Apostle Peter is in Rome about 64 AD. The Emperor of the Roman Empire is Nero. Yes the same Emperor it is said who torched Rome to rebuild it the way he wanted for his own glory. Under Nero our sisters and brothers in the early Church are being persecuted. Crucified, set on fire as torches, clothed in animal skins to be devoured by lions in the Roman Colosseum. That is the context of Peter’s letter we read today. Recall, Nero is Emperor… The Apostle Peter, who walked with Jesus in real time and place writes, “honor the Emperor” (1 Peter 2:17). Peter writes words of virtue and respect. Is Emperor Nero worthy of such respect? As a person, no, but the office of Emperor is worthy because God ordained the office (see Scripture references below). Remember Peter walked with Jesus. He saw and heard virtue in the incarnate Son of God. Nothing vile came out of the mouth of Jesus toward the Jewish Sanhedrin and the Roman occupation government that collaborated to crucify him. So Peter is living and writing with the virtue of Jesus. He is following the words of the Word of God incarnate, Jesus. So, may our words in voice and script be “honorable” to all public servants should they be Democrat, Republican, Independent or whatever. Ultimately our Sovereign God is in control (Jeremiah 25:8-9; Mark 12:17; John 19:11; Acts 4:27-28; Romans 13:1-4). In the meantime we are called to pray for “kings and all in high position.” The call to prayer is not quantified by a political party label. Remember, “For to us a child is born, to us a son is given; and the government shall be on his shoulders…” (Isaiah 9:6a). Christ is in control in the now and certainly the future (Revelation 19: 11,15-16). “For to us a Son is born…” Merry Christmas…

FacebookTwitterSubscribe
Subscribe to receive all news to your email or phone: [wysija_form id="1"]
emperorhonor

Tony Morgan: Got a Strong Plan to Re-Open Churches?

Think You Have a Strong Plan to Re-Open? Here’s What MOST Churches Are Missing (Based on conversations with 100+ pastors) I’m still surprised my…