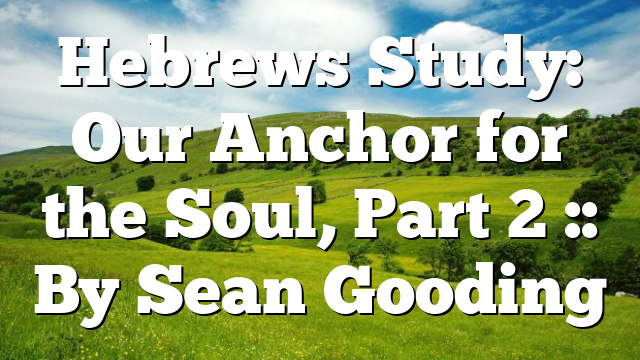 “19 This hope we have as an anchor of the soul, both sure and steadfast, and which enters the Presence behind the veil, 20 where the forerunner has entered for us, even Jesus, having become High Priest forever according to the order of Melchizedek.”

Last week we explored the security we have in Jesus. He is the anchor of our souls, and God has saved us forever. In the process of looking at these verses, we come across the mention of a man named Melchizedek. It has been a long time since he was even mentioned. The very first time we meet him was a brief encounter between him and Abram all the way back in Genesis 14. This meeting would have happened more than 1,500 years before these verses in Hebrews were penned. What, then, does this man have to do with Jesus and our salvation? First, let us take a look at the encounter between Melchizedek and Abram.

“Then Melchizedek king of Salem brought out bread and wine; he was the priest of God Most High. 19 And he blessed him and said: ‘Blessed be Abram of God Most High Possessor of heaven and earth; 20 And blessed be God Most High, who has delivered your enemies into your hand.’ And he gave him a tithe of all” NKJV.

This short meeting was a profound and important meeting. Here we notice an interesting thing. Melchizedek is both the King of Salem (King of Peace) and the High Priest of God. This was not a part of the Old Testament covenant. The tribe of Levi was the priestly tribe. Aaron, for instance, was from the tribe of Levi as were all the subsequent priests. And Judah was the tribe of the Kings of Israel. Only Saul, who was from the tribe of Benjamin, was not of Judah as far as the kings of the united and then southern kingdoms. Jesus will rule on the throne of his father David; Jesus is from the tribe of Judah.

So, God separated the offices of the High Priest and King. But in Melchizedek, we have a man who is both. But in Hebrews 9:19-20, we are told that Jesus entered behind the veil, referring to the veil that separated the Holy of Holies from the rest of the Temple. Jesus, we are told, entered there for us. He went behind the veil for us. When did He do so? Well, we know for sure that He went to Paradise when He died; He promised the thief on the cross that He would meet him there:

Then we see another verse in Matthew that tells us what happened in Jerusalem when Jesus did resurrect:

Matthew 27: 52-53 “The tombs broke open, and the bodies of many saints who had fallen asleep were raised. After Jesus’ resurrection, when they had come out of the tombs, they entered the holy city and appeared to many people.”

When Jesus was resurrected, people left the place called Paradise and came and visited people in the city of Jerusalem. But a strange thing happens early in the morning when Jesus meets Mary Magdalen. It is recorded in John 20:17:

“Jesus said to her, ‘Do not cling to Me, for I have not yet ascended to My Father; but go to My brethren and say to them, ‘I am ascending to My Father and your Father, and to My God and your God'” (NKJV).

Jesus was going to the Father. He had not yet gone to see the Father after the crucifixion, because He was in Paradise in the heart of the earth. He did not go to Hell as is often preached by many prominent preachers. Now, what was He going to the Father to do? He was our forerunner; He, according to Hebrews, entered behind the veil in Heaven for us. The veil on earth was torn at the end of His life here on earth. In Hebrews 9:12, we are told that He entered there with His OWN blood:

“He did not enter by the blood of goats and calves, but He entered the Most Holy Place once for all by His own blood, thus securing eternal redemption” (NKJV).

We will learn more about Melchizedek in the next lessons, but he is one of the most fascinating characters in the Bible. He set out a precedent that only someone who was the King of Jerusalem could do, who was also our High Priest. This means that salvation could only come through a very, very specific person. Jesus is the only living heir to the throne of David. He is the only one who has the rightful and legal claim to the throne of Israel, and one day soon, He will come to claim it.

Is Jesus your High Priest? He is mine. Is He your King? He is mine. He must be both to us, and it was God who established this. But you say we are not Jews; Abram was the father of the Jews. Paul tells us in Romans 4: 11-12; we find that Abram is the father of all who believe, for he believed before the Law, by faith in God’s Word:

Pastor of Mississauga Missionary Baptist Church
How to Connect with Us

The post Hebrews Study: Our Anchor for the Soul, Part 2 :: By Sean Gooding appeared first on Rapture Ready.

“How you doin’ in the Spirit” A Pentecostal Group Update The Pentecostal Theology facebook group and its website www. PentecostalTheology.com have been online exactly…