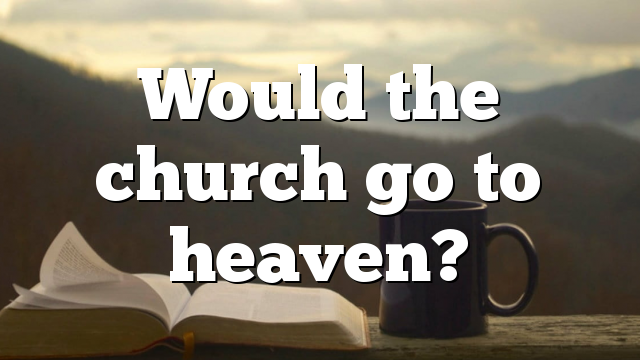 Heaven or the resurrection?

I wonder why so many funerals in churches focus on the deceased being ‘in heaven’ and the need for the audience to die and go to heaven, when there isn’t any direct scripture about your disembodied spirit going to heaven when you die. Paul does say he would rather be absent from the body and present with the Lord. But some people even take that passage as a rapture passage, seeing the body as the temporal body, a tent that will be shed and replaced with the incorruptible.

But the emphasis when it comes to this topic is certainly the return of Christ and the rapture. Paul refers to the deceased as asleep in Christ. He even tells believers, when talking about death to ‘comfort ye one another with these words’. What words?

‘The dead in Christ shall rise first, and they which are alive and remain shall be caught up to meet the Lord together in the air, and so shall they ever be with the Lord.’

If Paul commanded believers to comfort one another when someone dies with words of the resurrection and rapture, why isn’t this THE verse that is always read at funerals? Why skip this verse and talk about something that the Bible doesn’t emphasize or even directly mention– dying and going to heaven? I can’t find the ‘hope of heaven’ in the Bible. I’ve heard it in sermons. I can find ‘the hope of the resurrection’ and the hope of Christ’s return.

I had a conversation with an Englishman who’d settled in New Zealand and who was serving as a dean at a Bible college in Indonesia. He was a gifted teacher and also gifted in prophecy, and gave a word over me that hit the nail on the head, part of which was a repeat of a word I’d just gotten elsewhere.

This one of those areas where we hear something so much in church that it effects our thinking, even if it isn’t really something that we read in the Bible. Living in a mostly Mus|im country, it also made more sense to speak in terms of the resurrection, since that was an aspect of their religion that coincided with what the Bible taught, that there would be a resurrection of the dead and that they would be judged. That was an emphasis in Paul’s evangelism.

Josue Chavez Reveles [10/13/2015 2:02 PM]
This is actually something my wife and I were chatting about. We promised to research on this subject but have not gotten into it just yet.

Anthony Lombard [10/13/2015 5:21 PM]
Link, since you seem to have such keen insight into Scripture, what wisdom would like to impart that ministers should say at funerals?

Link Hudson [10/13/2015 6:06 PM]
Anthony Lombard, Paul told his readers with what words to comfort one another when someone dies: “‘The dead in Christ shall rise first, and they which are alive and remain shall be caught up to meet the Lord together in the air, and so shall they ever be with the Lord.’ ”

Link Hudson [10/13/2015 6:09 PM]
Btw, could someone show me how many times one of the apostles makes reference to dying and going to heaven while evangelizing? I can point to references to the resurrection. The doctrine of the resurrection– which includes our resurrection– is very much intertwined with the message of salvation. Take a look at I Corinthians 15 for an example.

Link Hudson [10/13/2015 6:16 PM]
I Thessalonians 4 16 For the Lord himself shall descend from heaven with a shout, with the voice of the archangel, and with the trump of God: and the dead in Christ shall rise first: 17 Then we which are alive and remain shall be caught up together with them in the clouds, to meet the Lord in the air: and so shall we ever be with the Lord. 18 Wherefore comfort one another with these words.

I should add that to the OP.

If we look up ‘heaven’, we see a lot of references to ‘kingdom of heaven’ where it says ‘kingdom of God’ in other books. The Jews sometimes avoided saying the name of God, and Matthew is believed to have been written to a Jewish audience. Even nowadays, some Jews spell God like G-d, even in English. There is a tradition of substituting ‘Adonai’ for the divine name when reading Torah. There are plenty of references to heaven, but not direct reference to ‘going to heaven when you die’ and it isn’t a part of the way the apostles evangelized when they presented the Gospel.

In Acts 2, we don’t read where Peter says, “you might fall off your donkey today and die. Would you go to heaven or Hell?” The idea of dying and going to heaven may have been a foreign concept to his audience, but the idea of being raised from the dead probably wouldn’t have been. They would have at least been familiar with the concept.

Anthony Lombard [10/13/2015 8:33 PM]
Somehow I am missing the critical issue. Sounds like you’re making a mountain out of a mole hill. Resurrection and rapture have some distinct similarities.

Link Hudson [10/13/2015 9:26 PM]
Anthony Lombard, who has been talking about a distinction between the rapture and the resurrection? “Going to heaven when you die” isn’t the same thing as the rapture and resurrection that occurs when the Lord descends from heaven.

David Sanderson [10/13/2015 11:08 PM]
Will we ascend into the air? A pastor spoke on this recently and said we will not, and this is a very misunderstood and misinterpreted verse. Do you agree?

Kevin Bounds [10/14/2015 7:59 AM]
Link Hudson, I see your argument and it is interesting topic. Yet, what of Jesus’ words to the thief on the cross? The Bible states, “And Jesus said unto him, Verily I say unto thee, Today shalt thou be with me in paradise” (Lk. 23:43 KJV). Wouldn’t this be what Paul spoke of by “being absent of the body”? Just interested in how you see this passage in light of the topic.

Timothy D McCune [10/14/2015 10:03 AM]
luke 16;27-29 speaks also about wanting someone to go warn his brothers of this place of torment torment, ( hell) so we know theres a heaven and a hell. I think we as christians want to know whats next where will we be but maybe we go all over, travel back and forth to the new heaven and earth and places beyond.

Kevin Bounds [10/14/2015 3:16 PM]
So, I don’t misunderstand you. You are saying the spirit is with Christ in paradise at the moment of death, but heaven comes later.

Link Hudson [10/14/2015 3:24 PM]
Kevin Bounds, my point is the Bible doesn’t say that much about what we experience at death before the resurrection, and the focus on the afterlife in scripture, particularly in evangelistic passages, is on the resurrection. And when one of us dies, we are supposed to comfort one another with words about the dead in Christ rising. The Bible doesn’t tell us to comfort one another with talk about dying and going to heaven.