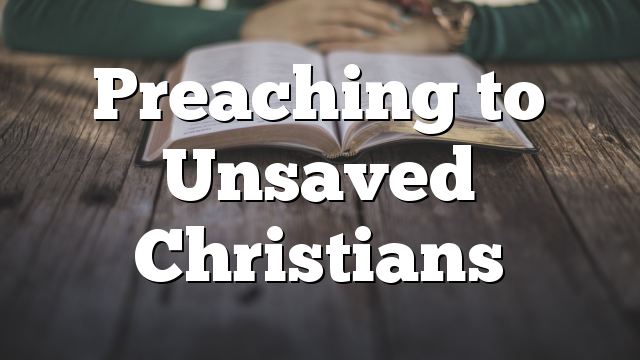 To Reach Unsaved Christians, First Help Them Get Lost

Unsaved Christians—Thoughts on Sin, Hell and Following Jesus in an Unsaved Condition

There is a glorious salvation to be had, and the enemy has tainted powerful, life-giving theologies in an attempt to counterfeit them—and draw people away from the one true God. God’s passion is for people to be wildly in love with him, and that is what the enemy is afraid of. Instead of radical intimacy and passionate obedience, people are falling for a lesser false-doctrine that communicates God’s apparent affirmation of them and affection for them—and it is resulting in a faux closeness to him for millions of “Christians.”

Our salvation is glorious and it is also weighty. We can’t presume upon it or take it lightly. I suggest it’s possible that most people who are convinced of their position in Christ would actually be in Hell if they died today. I will share some convincing and powerful stories that speak directly to further down in the article. People like Corrie Ten Boom, John Mulinde and Daniel Ekechukwu have a perspective that few others do.

The concept of unsaved Christians seems contradictory. I understand that. A Christian is a follower of Jesus. I am suggesting that there are many followers of Jesus, many who name the name of Christ, who are living their lives following him in an unsaved condition.

Religious but Not Saved

It is well documented that those who claim no religious affiliation are on the rise. Between 2007 and 2014, this group jumped from 16.1 to 22.8 percent of the American population. This coincides with a decline in people identifying as Christian, although there is reason to believe this is really just a refinement process and not a sign of bleeding in the actual Christian demographic. As the social costs of Christianity increase, those with only nominal belief are falling away. According to a study of US adults, 80 percent of those polled believe in God, but only 56 percent believe in God as described in the Bible.

Considering the fact that approximately 70 percent of the US population still identifies as Christian, we have a large group of people that would likely be overlooked in outreach or missions. With this in mind, I believe cultural Christianity is the most underrated mission field in America. While there is evidence that nominal Christianity is declining on its own, it is of utmost importance that we minister to those on the fence, in hopes that they may end up within the fold and not without.

Consider the petitions Jesus gave as an example in Matthew 7:21–23 in our modern context. I believe his examples would translate to our era like this:

The term self-righteousness often comes with a connotation of superiority or rigid legalism. And while those might be results of self-righteousness, the root of self-righteousness is the belief that your works justify you before God. Many people function as if they don’t need saving, but that doesn’t change the reality that God has given only one mediator and one atonement with no exception clause.

Here are some tips to remember when establishing a starting point in a spiritual conversation with a cultural Christian.

• Many cultural Christians claim to revere the Bible. So feel free to refer to it as the authority on all things sooner than you might if talking to someone of another faith. You have a wide open door to use the Bible as your point of reasoning with people who already claim to believe it is a sacred text. Many of them have church affiliations that don’t use the Bible much, so it is likely that they have no idea what the Bible they claim to believe actually says.

• Lovingly ask frustrating questions. “What is the standard for good?” “How good is good enough?” “How many more good deeds do you need to have than bad?” “Who doesn’t make it to heaven?” Ask these questions to uncover their source of authority for their stated beliefs. Most cultural Christians won’t be able to answer these questions. The point of this is not to mock them or embarrass them. It’s to establish a starting point of what God has told us about himself, our sin, and the solution found in Jesus Christ.

• Ask about the Ten Commandments. There’s a good chance they can name some of them. Ask how they’ve done in keeping them and if there is any consequence for breaking them. If not, why did God give them to us?

• Cultural Christians claim a belief in Jesus Christ. They also believe he died on the cross. If good people go to heaven, why did Jesus die? Is anything more confusing than a Savior dying for people who really didn’t need saving?

by Jason Conley Don’t believe your lying eyes.  The government is now Beta testing new holographic technologies that will be used against you soon…