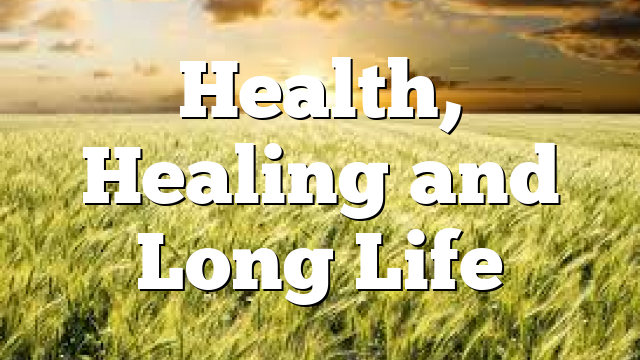 Healing comes in a variety of ways, through the gifts of healings mentioned in 1 Cor. 12, to laying on of hands, anointing with oil etc. God in fact will use doctors and nutrition for good health and healing and will sometimes use them supernaturally as well as naturally. And for those who will believe, our Lord Jesus purchased divine health and healing and long life on the cross along with the forgiveness of sins.

In Romans 8, in fact, we can see that the indwelling Holy Spirit will give “Life to our mortal bodies,” which includes health and healing and extended years.

Andrew Wommack’s commentary explains these scriptures so well. He writes:

So, let us let the Spirit of Life, Jesus, live through us, consciously walking after the spirit and not after the flesh, and have faith to believe for long life and wholeness, free of all sickness and disease.

What About Long Life

And what about long life. Even after the fall of Adam in the garden, people lived many centuries. Adam lived to 930 years, and Noah until 950. But by Noah’s time, God spoke a limit in Gen. 6:3, Then the Lord said, “My Spirit will not put up with humans for such a long time, for they are only mortal flesh. In the future, their normal lifespan will be no more than 120 years.”

Even then, it took many generations, with people only gradually living shorter lifespans. By Abraham and Sarah’s time it was down to 175 and 127 years respectively. Isaac made it to 180. By the time we get to Moses we are down to 120 years. Joshua lived to 110, and Caleb also made it to the promised land, unlike all the rest who died in the wilderness, indicating a shortened life span. By the time of the law, lifespans were well below the limit of 120 that God had set. In Psalm 90, attributed to Moses, we read, “The days of our lives are seventy years; And if by reason of strength they are eighty years.” Solomon only ruled for 40 years before he died.

Since then, we can see through the dark and middle ages and even up to modern times, especially in underdeveloped lands life spans shortened to typically 30, 40, maybe 50 years. In the developed countries, modern medicine has been able to make a limited impact and many live past 70 into their 80s and 90s, and a few even past 100, though often sickly and weak and unproductive.

But what should we believe for? Some will look at Psalm 90 and the 70 – 80 years expected as a lifespan by people around the time of the law. But “Christ has redeemed us from the curse of the law, having become a curse for us” (Gal. 3:13). So, I believe we can now believe for the Genesis 6 expectation of a normal lifespan up to 120 years. (And indeed, there have been prophetic messages lately to that effect which I believe are indeed in accordance with scripture). We are in end times, and God wants to do much through us. So, brothers and sisters, let us change how we speak, changing our confession to one of long life, longer than we had previously expected.

I do not believe the Lord has put so much preparation into us, not to want to use us to that potential

I will be happy to go home to be with the Lord when my work here is done. But like Caleb, I, and many of my generation, have had powerful but not completely fulfilled calls on our lives from our 30s and 40s, only now really starting to bear fruit. I do not believe the Lord has put so much preparation into us, not to want to use us to that potential. Caleb went through the 40 years of the wilderness, and entered the promised land in his 80s, still strong, and lived many more years possessing his land. When Moses died at 120, “His eyes were not dim nor his natural vigor diminished” (Deut. 34:7).

So, Caleb generation, let us arise to complete the task of spreading the Kingdom and bringing in the harvest as ambassadors for Christ and ministers of reconciliation. If the Lord should tarry, we can believe for 30-60 more healthy, prosperous years serving Him in the spirit, letting His life and light flow through us to the world around us.

Living in Grace through Faith

His Glorious Ways – Grace through Faith – Ray E Horton How glorious are His ways: “Therefore, having been justified by faith, we have…