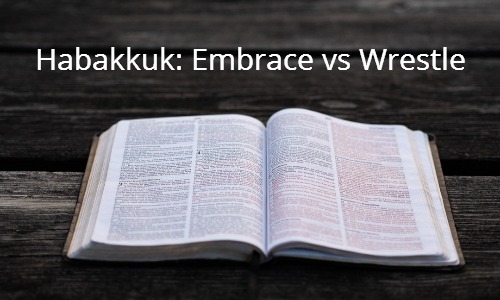 The Book of Habakkuk

Habakkuk is the seventh of the Minor Prophets of the Old Testament. It is believed that he lived in the 7th century during the reign of King Josiah, before the Babylonian Captivity. The three chapter book begins with Habakkuk pleadingly asking God why He is showing him visions of the devastating judgments that are coming on Israel.Habakkuk sees all the evil in his country, and knows what is coming and questions God as to why this is happening if God was so good? God answers Habakkuk by telling him that He will bring justice and judgement on His people for their sins allowing the Babylonians to conquer Israel for the many years that it has continuously broken their covenant with God! But Habakkuk questions God again about Israel’s punishment of destruction by Babylon! That the Babylonians are men to have done evil in God’s eyes also, and surely God will not allow them to get away with their evil deeds! God responds again, saying that the Babylonians will come and do all that God said they would do, according to God’s will but that the Just shall live by Faith! God doesn’t endorse the evil things that the nations do, but will bring about their down fall! The last chapter Habakkuk gives a powerful prayer to God for the Final Judgment against all evil!

National Day of Prayer for the Victims of Hurricane Harvey