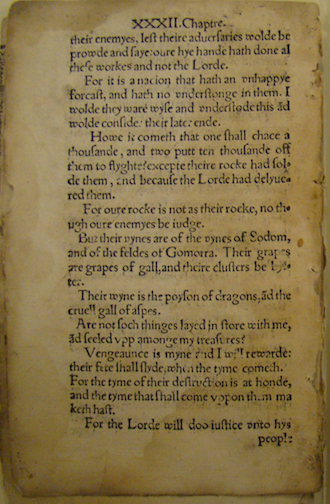 Steve Webb [01/01/2016 1:28 PM]
I think that’s an erroneous statement, but that’s just my opinion. God give many second chances in the OT, well proving the point of NT passages that God wants all to be saved.
To me the main difference is the way of access to God, which boils down to a different covenant with the same intent.

Ben Wilson [01/01/2016 1:36 PM]
Well, that’s not exactly the way that the “God of the Old Testament” described himself. Consider what happened when the Children of Israel made a golden calf to worship. Moses went back up on the mountain to intercede for them, and asked God “Show me your glory”.

“5 And the Lord descended in the cloud, and stood with him there, and proclaimed the name of the Lord.

6 And the Lord passed by before him, and proclaimed, The Lord, The Lord God, merciful and gracious, longsuffering, and abundant in goodness and truth,

7 Keeping mercy for thousands, forgiving iniquity and transgression and sin, and that will by no means clear the guilty; visiting the iniquity of the fathers upon the children, and upon the children’s children, unto the third and to the fourth generation.”

New Testament God: Beloved, let us love one another. Everyone that loves know God and is born of God. God is love. He who hates his brother does not know God. Etc.

God is love, all the time.

Ricky Grimsley [01/01/2016 2:10 PM]
God’s nature didnt change but we do have to have answer to the questions of why God destroyed whole cities and whole races even little babies. I mean seriously, do you believe that the people of noah’s day were more wicked than we are. Yet God destroyed all but 8. We should have a good answer for that stuff.

Curtis Fenison [01/01/2016 2:17 PM]
We do. 1. We are all sinners deserving judgement. 2. Even the USA killed (not murdered) german nazis. 3. This one one wont go over well with some but those tribes God had destroyed where nephilim Giants. 4.. 5.. there are several more better ones

Shawna Martinez [01/01/2016 2:35 PM]
He is the same God yesterday that he will be today and tomorrow. His miracles and mercy is abundant and everlasting.

Ricky Grimsley [01/01/2016 2:42 PM]
But how do you explain the mercy part as the the children of israel pulled babies from their mothers arms and killed them. How merciful in Noahs day. What if you lived in the cities where God commanded them to kill everyone.

Shawna Martinez [01/01/2016 2:52 PM]
This is how I explain the mercy part. Thanks for asking! God healed me of Stage 3 Invasive Breast Cancer. He also healed my irregular heartbeat that I had since I was born. How do you explain that? You don’t explain you just give him thanks, be still and know that he is God! Praise God! I don’t question him and in my opinion neither should you.

Curtis Fenison [01/01/2016 2:56 PM]
If you had a world of people in your care. And an a enemy corrupted your genome and They were redeemable if they would repent but after certain generations they would no longer be redeemable what would you do? Noahs generation was such. And after that. Gen 6:4-5. As in the days of Noah so shall it be again when Jesus returns.

Ricky Grimsley [01/01/2016 2:58 PM]
Im glad God healed you but that doesnt absolve you of giving answer to a valid question. You can use your testimony for good but you can also do damage if all you have to say to those who get healed or lost love ones is “well god healed me but not you and who knows why”. As Curtis just said there are reasons why God does the things he does.

Shawna Martinez [01/01/2016 3:04 PM]
God will do for others the same as he has done for me. They only need to ask and believe with no doubt that it will be done. Ask and you shall recieve. I never heard of a testamony hurting anyone that is ridiculous.

Drew Banacos [01/02/2016 2:16 AM]
Marcion was a heretic in the early church who claimed that the god of the OT was an evil demiurge who created the world. Jesus, however, was the revelation of the true most high god. Gnostics held similar views to him. Anyway, I’ve looked at the OT and NT thoroughly and, while I do disagree with Marcion, there appear to be some significant differences. One, the Torah records a man who God says to stone to death for picking up a bundle of sticks on the Sabbath. Jesus and his disciples pick food on the Sabbath and he seems unconcerned with this OT passage. Elisha called down fire from heaven upon his enemies. Jesus’ disciples try to get Jesus to do the same in Luke 9 but he rebuked them. Jesus completely rejects the Temple in the Synoptic Gospels. Although the New Testament maintains at times the concept of the fear of God, 1 John 4 seems to place fear in contrast with love. Fear has to do with condemnation, thus it suggests perhaps that Christians can experience God in a way that is more complete because of the revelation of Jesus Christ, as well as the entire Trinity in this revelation (note: I’m not referring to Modalism). Maybe we should think of the differences between OT and NT as God’s way of developing his people and further revealing who he is. There are, for instance, passages in the Bible where an evil deed gets attributed to God. In later accounts, however, they are attributed to Satan. The best example I can think of is the census David took that was not in order.

John Kissinger [01/02/2016 8:59 AM]
The gr. verb ‘katalambano’ translated foundation, means fall – since the fall of the world. How do you place the Greek text of the Bible in your pre-election theology which you say you subscribe to? http://www.pentecostaltheology.com/cornelius-was-saved-after-peter-shared-the-gospel/

NT
The Father revealed Himself in and Through His Son (John Chapter 1), and reveals more daily through the Holy Spirit. John 16:13
Howbeit when he, the Spirit of truth, is come, he will guide you into all truth: for he shall not speak of himself; but whatsoever he shall hear, that shall he speak: and he will shew you things to come.

James Price [01/05/2016 10:18 AM]
It seems to me that it is partly a matter of perceptions, the writers of the O T perceived God to be harsh and unrelenting while in the N T Jesus described a heavenly father who wants to give good gifts to His children.

Function of the Holy Spirit

Today we look at the Function of the Holy Spirit. We saw that the Holy Spirit came to a prepared people. http://andnowyouknowmore.blogspot.com Each week…