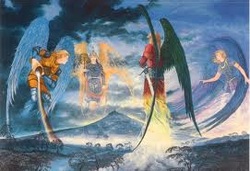 Do ANGELS minister WITH us?

Read this testimony by @Darren Canning

Almost immediately after that word I started to see angels in my meetings, but not just in my meetings. Even when I would be in casual conversation with people these angels would appear. There have been many of them – all shapes and sizes. Mostly they appear as lights in front of me and in different colors. There is no rhyme or reason for why they appear when they appear. They just appear when they appear. I have seen very tall ones and very short ones. I have seen some that minister revelation, others healing and still others deliverance. In fact, I had a dream in which I saw Bob Jones sometime early in 2012. I said, “Bob tell me what the angels are ministering and he said, “Deliverance.”

Stan Wayne [01/01/2016 5:21 PM]
Sounds delusionary – in scripture angels appeared to any and all present not in the mind of one person repeatedly

Stan Wayne [01/01/2016 8:13 PM]
Very suspicious since in the bible angels appear randomly to multiple people at once. When it is just one person seeing it while others are around it is not a physical appearance but something in the mind.

John Kissinger [01/02/2016 8:22 AM]
Peter A Vandever we were in a meeting of 5,000+ on 9.9.2009 and some said that behind us on the stage were angels. we watched the video and many pictures afterwords and did see some light movements but were they angels I cannot confirm or deny…

FacebookTwitterSubscribe
Subscribe to receive all news to your email or phone: [wysija_form id="1"]
angelsminister

Why the rapture of the church if the tribulation and the antichrist is to affect the Jews or Israel?

Why the rapture of the church if the tribulation and the antichrist is to affect the Jews or Israel?