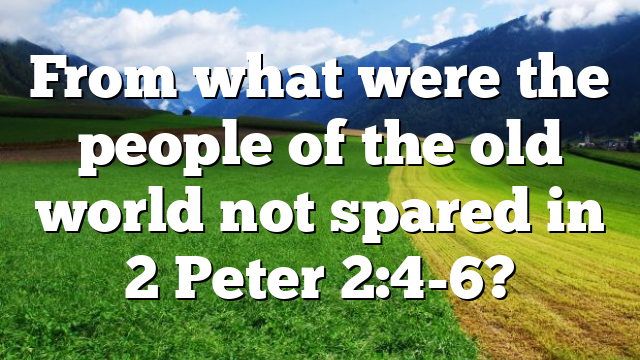 
[2Pe 2:4-6 YLT] 4 For if God messengers who sinned did not spare, but with chains of thick gloom, having cast [them] down to Tartarus, did deliver [them] to judgment, having been reserved, 5 and the old world did not spare, but the eighth person, Noah, of righteousness a preacher, did keep, a flood on the world of the impious having brought, 6 and the cities of Sodom and Gomorrah having turned to ashes, with an overthrow did condemn, an example to those about to be impious having set [them];

I see a parallel between the messengers (angels?) who were not spared and "the old world" (which sinned?) that God "did not spare."

Now, I understand "sparing" in this context to refer to "to forbear to destroy, punish, or harm." In the next breath he describes what punishment he DID do:

In the case of the angels:

"but with chains of thick gloom, having cast [them] down to Tartarus, did deliver [them] to judgment, having been reserved,"

But in the next sentence, the case of the "impious" seems to be more mundane:

[2Pe 2:5-8, 10-22 YLT] 5 and the old world did not spare, but the eighth person, Noah, of righteousness a preacher, did keep, a flood on the world of the impious having brought, 6 and the cities of Sodom and Gomorrah having turned to ashes, with an overthrow did condemn, an example to those about to be impious having set [them]; 7 and righteous Lot, worn down by the conduct in lasciviousness of the impious, He did rescue, 8 for in seeing and hearing, the righteous man, dwelling among them, day by day the righteous soul with unlawful works was harassing. ... 10 and chiefly those going behind the flesh in desire of uncleanness, and lordship despising; presumptuous, self-complacent, dignities they are not afraid to speak evil of, 11 whereas messengers, in strength and power being greater, do not bear against them before the Lord an evil speaking judgment; 12 and these, as irrational natural beasts, made to be caught and destroyed -- in what things they are ignorant of, speaking evil -- in their destruction shall be destroyed, 13 about to receive a reward of unrighteousness, pleasures counting the luxury in the day, spots and blemishes, luxuriating in their deceits, feasting with you, 14 having eyes full of adultery, and unable to cease from sin, enticing unstable souls, having an heart exercised in covetousnesses, children of a curse, 15 having forsaken a right way, they did go astray, having followed in the way of Balaam the [son] of Bosor, who a reward of unrighteousness did love, 16 and had a rebuke of his own iniquity -- a dumb ass, in man's voice having spoken, did forbid the madness of the prophet. 17 These are wells without water, and clouds by a tempest driven, to whom the thick gloom of the darkness to the age hath been kept; 18 for overswellings of vanity speaking, they do entice in desires of the flesh -- lasciviousnesses, those who had truly escaped from those conducting themselves in error, 19 liberty to them promising, themselves being servants of the corruption, for by whom any one hath been overcome, to this one also he hath been brought to servitude, 20 for, if having escaped from the pollutions of the world, in the acknowledging of the Lord and Saviour Jesus Christ, and by these again being entangled, they have been overcome, become to them hath the last things worse than the first, 21 for it were better to them not to have acknowledged the way of the righteousness, than having acknowledged [it], to turn back from the holy command delivered to them, 22 and happened to them hath that of the true similitude; 'A dog did turn back upon his own vomit,' and, 'A sow having bathed herself -- to rolling in mire.'

The main exception seems to be verse 17.

From what were the angels/messengers not spared vs from what the old world was spared (which I thought was the flood)?

By his power God raised the Lord from the dead,…

WHY YES INDEED !! THERE IS DOCUMENTED PROOF BY MORE THAN TWELVE EYE WITNESSES !! YOU CAN FIND THIS DOCUMENTATION IN A BOOK ,…