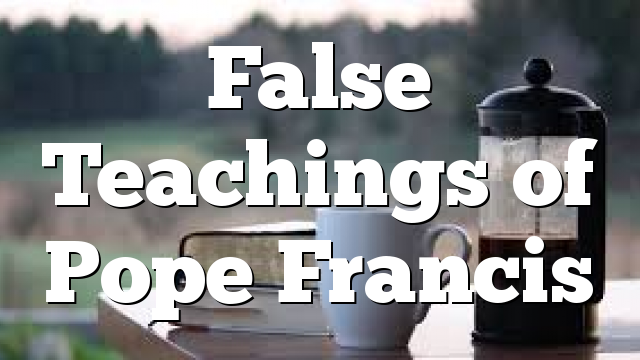 For all we can commend about Pope Francis, the fact remains that he, as a son of the Roman Catholic Church and as the leader of the Roman Catholic Church, remains committed to a false gospel that insists upon good works as a necessary condition for justification. He is the head of a false church that is opposed to the true gospel of salvation by grace alone through faith alone in Christ alone. The core doctrinal issues that divided Protestantism from Catholicism at the time of the Reformation remain today. The core doctrinal issues that compelled Rome to issue her anathemas against Protestantism are unchanged. Rome remains fully committed to a gospel that cannot and will not save a single soul, and officially damns those who believe anything else: “If any one saith, that by faith alone the impious is justified; in such wise as to mean, that nothing else is required to cooperate in order to the obtaining [of] the grace of Justification, and that it is not in any way necessary, that he be prepared and disposed by the movement of his own will; let him be anathema.”

Roman Catholic doctrine states that justification is infused into a person through the sacrament of baptism. The Catholic Catechism explains: “Justification has been merited for us by the Passion of Christ. It is granted us through Baptism. It conforms us to the righteousness of God, who justifies us.” However, this justification is not a judicial declaration by God, but the beginning of a lifelong process of conformity. It is insufficient to save a person without the addition of good works. This infusion of righteousness enables a person to do the good works that complete justification.

However, this justification can be diminished or even lost through sinful acts and in such cases it must be renewed and regained through confession, through the Eucharist, and through good works. Those who have been granted justification eventually merit heaven on the basis of the good works enabled by that justification. Again, according to the Catechism, “We can therefore hope in the glory of heaven promised by God to those who love him and do his will. In every circumstance, each one of us should hope, with the grace of God, to persevere ‘to the end’ and to obtain the joy of heaven, as God’s eternal reward for the good works accomplished with the grace of Christ.” This is another gospel, a false gospel, that adds human merit as a necessary addition to the work of Christ.

Francis also holds that Mary is mediatrix and co-redemptrix with her son Jesus, that Scripture is insufficient and must have the tradition of the church added to it, that even Christians who die may have to endure Purgatory, that Christ is sacrificed anew each time the Mass is celebrated, and so on. But no false teaching is more scandalous than his denial of justification by grace through faith alone.

You don’t have to be a Jew, a Christian, or even have a Bible in your possession to discover some truths. This is an…