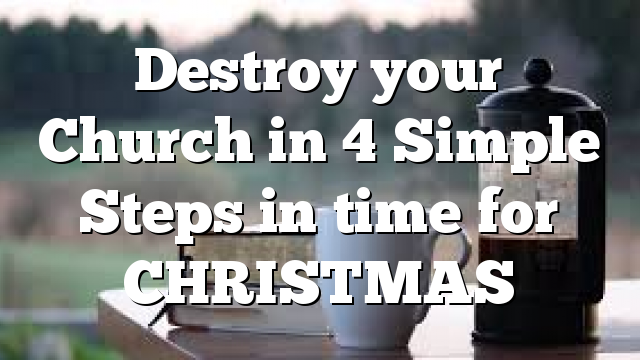 Here are those four simple steps that lead to a church’s self-destruction.

Paul warns Timothy that “They will turn away from listening to the truth.” The first step in destroying a church is turning away from what is true, losing interest in the truth as God reveals it, growing weary of what God says is true and lovely. What was once a love of truth becomes a dislike and then disgust toward truth; what was once a hatred of error becomes an intrigue and interest in error. Hearts begin to harden.

As they turn away from the truth, they necessarily turn against the truth-tellers. So Paul tells Timothy that in that day to come, “They will not endure sound teaching.” It’s not that people won’t know what is true, but that they won’t endure what is true. Because they have come to hate the truth, they will now hate those who proclaim the truth. The very teachers that once drew them will now repulse them.

This church has rejected the truth and those who teach the truth. Now what? It is obvious and inevitable: They will embrace false teachers. “Having itching ears, they will accumulate for themselves teachers to suit their own passions.” As these people become hardened in sin, as they grow in their rebellion, they will want to be led by people who tell them those things they want to hear. Paul uses a great word-picture to describe this: itching ears. These are ears that want to be tickled by novelty, by something that will be respectable to society and palatable to a godless world. They will soon find this kind of teacher who will justify their turning away from truth and who will validate them in their rebellion.

Once they have rejected truth and truth-tellers, and once they have found teachers who will tickle their itching ears, “They will wander off into myths.” They will now embrace full-out error, full out heresy. They will become hardened in their sin so they will now believe error is good and true. They will become so deluded and rebellious that they will celebrate what God hates and do it all in the name of God. They will wander off, just like dumb sheep wandering away from their good shepherd. The narrow road to salvation has no room to wander, but that broad road to destruction has all the room they need to wander this way and that.

And they will die. In the end, those who claim to have acted in the name of Christ will be shown to hate Christ. That church, that congregation, will die.

What happened to the church that once worshiped in the building we visited and wanted to buy? The people developed itching ears. They would no longer endure sound teaching, and accumulated for themselves teachers to suit their own passions. They turned away from listening to the truth and wandered off into myths.

The evidence of those myths was plain to see. Their hymn book had songs like “Mother and God” which says, “Mother and God, to you we sing: wide is your womb, warm is your wing.” Their web site featured a video about a pastor undergoing gender reassignment with the full support of his church. Their literature explicitly denied that Christ is the only way to God, saying “God works in our world by a mysterious Spirit that knows no distinction at the doorway of a Christian chapel; Buddhist, Hindu, or Sikh temple; Aboriginal sweat lodge, Muslim mosque, or Jewish synagogue.”

We did not get that building. That building was sold and, if I understand correctly, will soon be torn down. In the end the denominational leaders charged with selling it did not want the gospel in that building, they wanted money out of that building. They needed the money to help support two more of their floundering congregations that will inevitably soon be gone as well.

Two thousand years ago Paul wrote to young Timothy and told him exactly how this church, and so many like it, would die. He also gave Timothy a charge that would keep his own church from experiencing similar destruction and from wavering through the time of itching ears. But I will save that for another day.

The Gospel According to John, An Introduction Post #9 Symbolic Use of the Number Seven John employs the sacred number 7 in his Gospel…