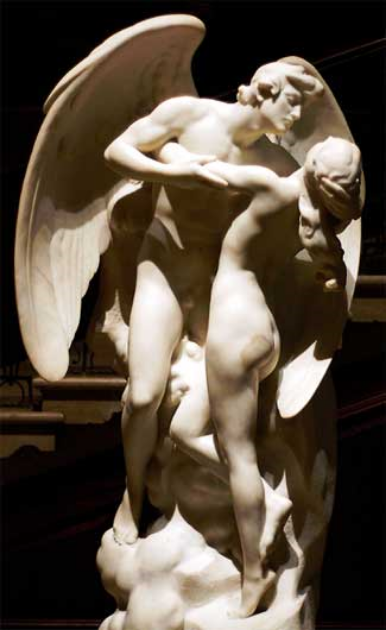 -To spell it out for a morally challenged culture, I interviewed Fr. Patrick, an exorcist, along with three members of his deliverance team about The Fifty Shades of Grey phenomenon demonstrates our culture’s unfortunate moral diversity.

Leaders from the Catholic Church warn it is immoral. Domestic violence groups warn it is dangerous to glorify sexual violence against women.  Even literary and movie critics warn that Fifty Shades of Grey  has “no discernible story and lacks a reason to exist.” And yet, it broke box office records for Valentine’s Day openings earning an estimated $81.7 million in its first three days.

It also became the second-highest February debut ever, behind The Passion of the Christ’s” $83.9 million opening in 2004.  It isbit of a relief that more people went to experience the Passion of Christ than to the erotic-R rated movie that promotes evil.   Fifty Shadesfans are not going to use the “e” word to describe the draw for them, however.  But for Catholics, the translation for “moral reprehensible” and “against the dignity of women” is evil.

To spell it out for a morally challenged culture, I interviewed Fr. Patrick, an exorcist, along with three members of his deliverance team. He was taking a break between two cases with his team, when he took my call and put me on speakerphone.  Fr. Patrick (not his real name) is a parish priest who has been a designated diocesan exorcist for 5 years after apprenticing for 6 years under an experienced exorcist. Members of his deliverance team that were present for the interview, engage in prayer support for him while he battles against demonic forces in people who come to him for help.  Everyone involved in the interview asked to keep their identity secret for this article due to the nature of their work.

Comments from members of the deliverance team will be attributed as DT.  Although Fifty Shades of Grey is R-rated, its sexual violent theme puts in on par with pornography so both topics were discussed.

Fr. Patrick: Going to a movie like that [Fifty Shades] is opening you up to whatever is being promoted. Whatever you take in, you take into your heart.  It deforms the heart and then that is going to play out in your relationships. People are enjoying it, calling it recreation but it is a mockery of God’s creation.

PT: Recreation is supposed to re-create us but this desecrates.  The movie makes a mockery of what God created.  It is the spirit of irony that the main character is named Christian Grey.  He acts in another way, not as a Christian, and grey—there cannot be shades of Christianity; it’s all or nothing. It is the devil that tries to convince us there is a grey area of right and wrong and it is the devil that mocks.

In the Mass, we celebrate the sacrifice of our Lord Jesus Christ and his divinity. But in a black mass, everything is upside down and mocked. The holy is made unholy. Just as sex in marriage is holy and a gift, in the movie it is against virtue and chastity and against God’s creation. That is what the devil does.

Fr. Patrick:  We are children of God.  If we watch movies that promote evil, it can be a slippery slope where the mind loses its ability to discern right and wrong and what is clean and unclean. We are talking about spiritual warfare.

I think it happens with the vampire movies. Why do people like them?  Which spirits are they welcoming into their lives?  Sucking blood?  It’s contrary to what is holy; entering into a dark world where something is dead and dead forever.  People are letting darkness into their lives and their relationships will not be better for it.

PT:  The work of the devil can be seen whenever righteous roles or relationships are attacked. With sins of the flesh, ultimately it is against the person.  All of the other sins we commit are outside the body but sins of immorality are against yourself the inside of the body. From a religious standpoint, every point of contact, every breath we take, every thought we take, takes us closer or further away from God.  If we sit still, the clock ticks…if we do nothing it’s an opportunity lost.

Fr. Patrick: It is said, that Internet pornography is just six key strokes away from satanism.  There is an association with evil and there are Satanic sex cults.

PT: The work of the devil can be seen whenever righteous roles or relationships are attacked.  In the sex cults,  people are drawn in with curiosity but it becomes a matter of what they are willing to do against virtue and against morality and what you are willing to do to diminish the dignity of another person depends on how high you rise. —agains thte path of sacntitdy.

Fr. Patrick: They [bad movies and pornography] are against the path of sanctity. They open people up to this way of thinking. We begin to justify sin and then our filter can no longer discern holiness from evil.  Instead of asking if there is something wrong with a movie, I would ask, is it redeeming?

For TRUMP the Bible is the MOST SPECIAL THING

The Bible is the MOST SPECIAL THING Still not convinced of political theology? John Kissinger [12/27/2015 5:46 PM]how can you NOT vote for this…