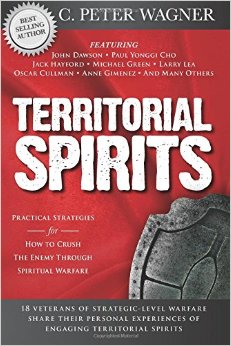 A Starting Point for Ongoing Discussion: Clinton Arnold which I would consider an appropriate starting point for a Lausanne statement on engaging territorial spirits in spiritual warfare:

1. There is a hierarchy among the demons and angels in the evil spiritual domain. Some evil angels have assignments over empires, people groups, countries, regions, territories, or cities.

2. There is struggle and warfare between the angels of God and the angels of Satan in the supernatural realm that has an impact on the unfolding of events on earth.

3. Through biblical revelation, God has heightened our awareness of the angelic realm. The knowledge he has given us is for the purpose of prompting our dependence on him through prayer.

5. Although we do not have the authority to directly engage territorial spirits, we certainly have the right to appeal to God to hinder and obstruct the grip of a demonic ruler over an area so that the gospel can be proclaimed and the darkness may be lifted from the eyes of the unbelieving.

6. “Spiritual mapping,” or, as I would prefer to call it, creating a “spiritual profile” of people in a city or country, is a useful way to help the people of God pray more specifically. It is also beneficial for informing the teaching and discipling of new believers.

7. “Identificational repentance” is an appropriate way of leading the people of God in dealing with issues of corporate sin. It does not, however, enable Christians to “remit” the sins of the nonbelieving population of a city, remove the curse of God’s judgment on them, or result in the weakening of the grip of the territorial spirits over the unbelieving population.

8. Christians do not need to feel a responsibility or a call to engage in a direct confrontation with the principalities and powers over a city, region, or a country We appeal directly to God, who will direct his angels to fight the battles against the high-ranking powers. (50)

TIME CHANGE for CHURCH SERVICES in the FUTURE

If you’re breathing, you know our culture is changing and that the church is undergoing a massive transition. The question is, what do you do about…