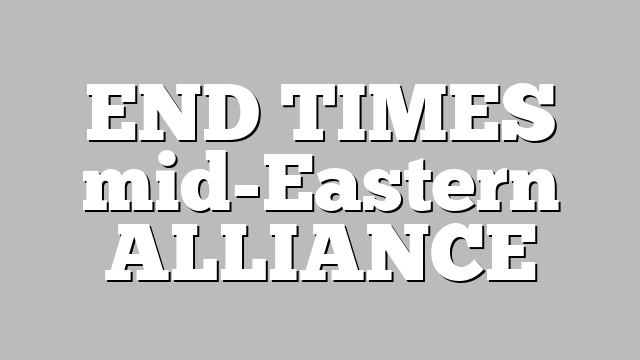 Jordan, because of their traitorous actions, will now be under Israeli control. This fact becomes crucially important later on during the Tribulation because the surviving remnant of Israel will be forced to flee into Jordan’s hills, escaping the Antichrist.

And Egypt will have gone at least partially under Israeli control as well.

Syria will have suffered a horrendous defeat, having their capital of Damascus completely destroyed in a nuclear attack in one evening!

Jeremiah 49:23-26
Against Damascus. “Hamath and Arpad are shamed, for they have heard bad news. They are fainthearted; there is trouble on the sea; it cannot be quiet. Damascus has grown feeble; she turns to flee, and fear has seized her. Anguish and sorrows have taken her like a woman in labor. Why is the city of praise [Jerusalem] not deserted, the city of My joy? Therefore her young men shall fall in her [Damascus] streets, and all the men of war shall be cut off in that day,” says the LORD of hosts.

Isaiah 17:1,9,14
1 An oracle concerning Damascus: “See, Damascus will no longer be a city but will become a heap of ruins.
9 In that day their strong cities, which they left because of the Israelites, will be like places abandoned to thickets and undergrowth. And all will be desolation.
14 In the evening, sudden terror! Before the morning, they are gone! This is the portion of those who loot us, the lot of those who plunder us.

The nations of the world will see this nuclear attack and they will panic. They will cause such a stir with their moaning and complaining against Israel, their roar will sound like the rushing waves of the sea. They will try to stop Israel but God turns them away.

Israel has just gone through a horrible and furious war between its neighbors, the war described in Psalm 83 and elsewhere is now over. Israel’s borders have expanded dramatically, forever changing the landscape of power in the region. Fulfilling the promise of Jeremiah 49:2, Israel will then look something like this:

Jeremiah 49:2
Therefore behold, the days are coming,” says the LORD, “That I will cause to be heard an alarm of war In Rabbah of the Ammonites; It shall be a desolate mound, And her villages shall be burned with fire. Then Israel shall take possession of his inheritance,” says the LORD.

Egypt will have witnessed this onslaught that Israel unleashes and will tremble in fear.

GOD IS REAL TO ME….AFTER RESURRECTION

GOD IS REAL TO ME….AFTER RESURRECTION HE TOOK A PIECE OF FISH AND DIPPED IN HONEY AND ATE IT IN FRONT OF THE 12…