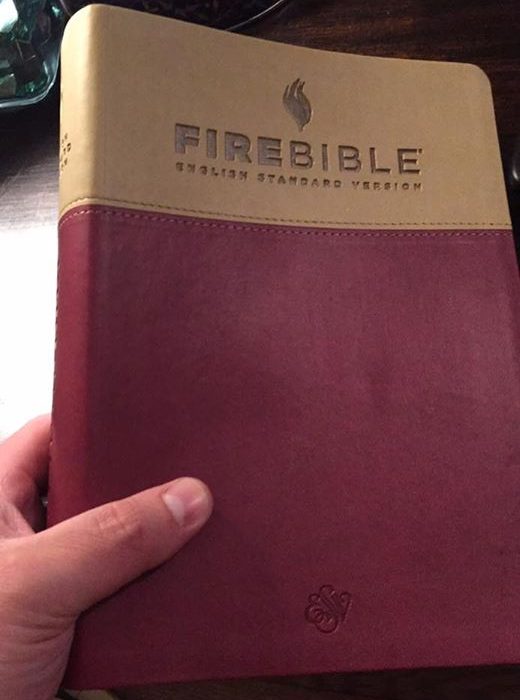 Does anyone else here use the Fire Bible? Several months ago, our team undertook the task of comparing and reviewing a growing number of Study Bibles appearing on the book market recently in what we called a 21st century Revival of Study Bibles. This article is part of our Study Bibles review series as outlined here: http://cupandcross.com/bible-revival/

I’ve been personally following and using the Fire Bible since it was called the Full Life Study Bible. And not mainly because it is Pentecostal (much like Dake’s and Spirit Filled Life Bibles), but more so because a good portion of the commentaries were written by one of my favorite professors in seminary, Dr. French Arrington. Therefore, I was very truly blessed when our ministry was able to participate in the translation and promoting this great work in Bulgaria.

Beginning with our usual control passages from the Old Testament, Number 6 contains a great detail of explanation on the vow and practice of the Nazarite law. Furthermore, there is a special note on “Wine in the Old Testament” in the Fire Bible, and the Aaronic benediction at the end of the chapter is specifically marked, outlined and discussed as two articles are cited in connection with “Faith and Grace” and “The Peace of God.”

Our second control passage in Jeremiah 18 is also not left without discussion. Actually, the commentary in v.8 makes two powerful points on God taking account spiritual changes in our lives and not forcing our decision despite knowing the final outcome; thus presenting a typical Pentecostal approach on free will, God’s sovereignty and foreknowledge, which is further discussed in the article on “Election and Predestination.”

The doctrine of the Rapture is not only mentioned in Revelation 4, but preceded with a special article from 1 Thessalonians and a detailed chart of Last Day Events in the forward of Revelation in both the early and the Fire editions. The Tribulation is also clearly explained as a post-Rapture event, divided in two parts and well documented with Scripture references. Additionally, in a very balanced Pentecostal manner, the dispensations, although noted by some, are not explicitly defended in the pre-Millennial system. The significance of the phrase “in the Spirit” is dully noted, which brings us to Pneumatology.

In regards to Pentecostal theology, the doctrine of Trinity is presented in an indictable orthodox way after the Athanasius Confession. Perhaps, the only criticism could be that there’s no mention of the fact that some early Pentecostal groups indeed taught Jesus-only doctrine. The Holy Ghost baptism is both theoretically and practically explained in the forward to Acts, while there’s an additional article on Speaking in Tongues after Acts ch.2. This is further mentioned in a comment after Mark ch. 16 followed by an article on Spiritual Gifts in 1 Corinthians 12.

There’s also a detail discussion the doctrine of Sanctification in 1 Peter after the foreknowledge of God is additionally explained. Sanctification is viewed as immediate, not “giving up sin little by little,” yet “do not suggest an absolute perfection.” The work of God and man is defined, and most importantly God is viewed as one who desires to sanctify His people. There’s no specific comparison to a second work of grace, yet the general approach toward the doctrine and practice of sanctification presents a typical, historically accurate, Pentecostal point of view toward the teaching.

FacebookTwitterSubscribe
Subscribe to receive all news to your email or phone: [wysija_form id="1"]
Biblefire