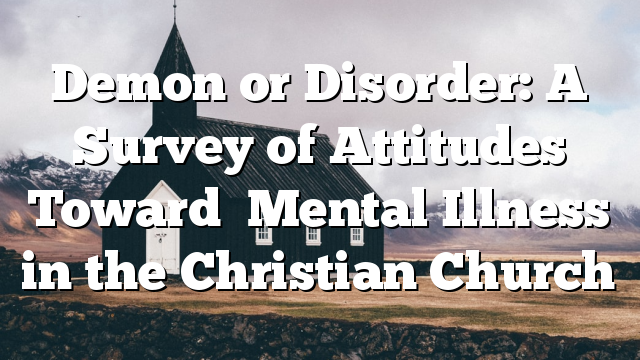 Demon or Disorder: A Survey of Attitudes Toward
Mental Illness in the Christian Church

2
Demon or Disorder: A Survey of Attitudes Toward
Mental Illness in the Christian Church

The present study assessed the attitudes and beliefs that mentally ill Christians
encountered when they seek counsel from the church. Participants (n=293) completed an
anonymous online survey in relation to their interactions with the church. Analysis of the
results found that while a majority of the mentally ill participants were accepted, by the
church approximately 30% reported a negative interaction. Negative interactions
included abandonment by the church, equating mental illness with the work of demons,
and suggesting that the mental disorder was the result of personal sin. Analysis of the
data by gender found that women were significantly more likely than men to have their
mental illness dismissed by the church and/or be told not to take psychiatric medication.
Given that a religious support system can play a vital role in recovery from serious
mental disorders, these results suggest that continued education is needed to bring the
Christian and mental health communities together.

3
Demon or Disorder: A Survey of Attitudes Toward
Mental Illness in the Christian Church
It has long been understood that individuals experiencing psychological distress are
more likely to seek help from religious leaders than from any other professional (Chalfant
et al., 1990). This results from the fact that religious support offers the psychologically
distressed individual resources that are unavailable through more general social support
(Fiala et al., 2002). And indeed, research has shown that religious support can play a key
role in recovery from psychiatric illness (Fitchett et al., 1997; Lindgren & Coursey, 1995;
Yangarber-Hick, 2004).
Unfortunately, the negative influences of the anti-psychiatry movement of the 60’s
and 70’s (Adams, 1970; Mowrer, 1961; Szasz, 1961) are still being felt in the Christian
community today, limiting the possibility of a holistic approach to treating mental
disorders that incorporates both religious and psychiatric resources (McMinn et al.,
2001). This movement perpetuated the idea that the causes of mental illness are solely
spiritual in nature (e.g., personal sin, lack of faith) and thus should be dealt with in a
pastoral counseling context separate from all secular psychiatric or psychological
involvement. Although the relationship between the Christian church and the mental
health profession remains tense, inroads have been made on both sides. Sensitivity to
religious issues is now recognized by the American Psychological Association (APA,
2002), psychologists in general are becoming more open to religious and spiritual issues
(McMinn et al., 2003), and Christian leaders have become more educated as to the
biosocial causes and effective treatments of mental disorders (Lafuze et al., 2002).
The present study was undertaken to assess common attitudes toward mentally ill
congregants in the Christian church. Individuals who had interacted with the church in
4
reaction to a specific mental disorder were surveyed. It was hypothesized that despite
increased awareness and understanding of mental illness that a significant number of
participants would report negative interactions with the church. Negative interactions in
the present study were defined as either; 1) abandonment or shunning by the church
because of the mental disorder, 2) suggesting that the mental disorder was the work of
Satan or demons, or 3) suggesting that the mental disorder was the result of personal sin
and/or that they would be “healed” if they deepened their faith.

Methods and Results
Study participants were 293 (181 Females, 112 Males) self-identified Christians (226
Protestant, 67 Catholics) who responded to an anonymous online survey. Participants
were recruited through online mental illness discussion groups using the following
posting;
My name is Matthew S. Stanford, Ph.D. and I am a professor of
Psychology at Baylor University. I am presently gathering information on
the interactions between people struggling with mental illness and the
church. If you have sought help or counsel from the church in regards to
your or a loved one’s mental illness please go to [URL] and complete a
brief, anonymous 10 minute survey. Your feedback and involvement are
greatly appreciated.

The online discussion groups used for recruitment included both faith based and non-faith
based groups.
Participants represented a large range of ages (18-25, 30.4%; 26-35, 20.5%; 36-45,
25.6%; 46-55, 18.1%; 56-65, 4.1%; >65, 1.4%) with most falling between 18 and 35
years old. Most participants were from the United States (81.6%) and a majority of the
sample interacted with the church because of their own personal mental illness (57.7%;
5
Other family member’s mental illness, 24.9%; Child’s mental illness, 12.6%; Spouse’s
mental illness 4.8%). A wide range of Axis I disorders were represented in the present
sample: Mood Disorders, 39.9%; Schizophrenia and Psychotic Disorders, 30.4%;
Anxiety Disorders, 15.7%, Substance Use Disorders, 6.8%; Eating Disorders, 4.1%; and
Other 3.1%.
All participants responded to the following survey questions; 1) Did the church make
you feel like the mental illness was the result of personal sin? (No, 68.6%; Yes, 31.4%),
2) Did the church ever suggest that you or your loved one did not really have a mental
illness, even though a mental health professional said that you did? (No, 67.6%; Yes,
32.4%), 3) What was the church’s position on psychiatric medication? (It can be useful in
some situations, 78.8%; It was discouraged but not forbidden, 18.4%; It was forbidden,
2.7%), 4) As a result of the church’s involvement the problem seemed … (Unchanged,
39.9%; Better, 34.1%, Worse, 25.9%), and 5) How has this interaction with the church
affected your faith (Not affected it, 36.5%; Strengthened it, 36.2%; Weakened it, 14.7%;
I am no longer involved in the faith because of this incident, 12.6%)?
Analysis of the survey data by gender found that women were significantly more
likely to be told by the church that they did not have a mental disorder (Women 37%,
Men 25%; χ (1) = 4.56, p = 0.033) and discouraged from using psychiatric medication in
their treatment (Women 23%, Men 11%; χ (2) = 7.41, p = 0.025). This occurred despite
the fact that men and women in the present sample showed the same frequency and
severity of Axis I psychopathology.
2
2
At the end of the survey, participants were asked to briefly tell their story. Of the 293
individuals who responded to the survey 216 (73.7%) provided a descriptive vignette.
6
The content of the vignettes were rated as belonging to one of three categories; 1)
positive interaction with the church (31%), 2) negative interaction with the church
(32.9%) and 3) no interaction described (36.1%). The following are representative
vignettes;
Positive Interaction
“I burst into the chapel one night, manic, hallucinating, and generally right out of my
head. A kind and discerning priest, who already knew about the bipolar, got me to the
emergency room. At that point, he was the only one who could have done it. This is one
incident of many in 16 years of bipolar, but it’s enough for me knowing that he definitely
saved my life that night. My priest has always and will always be a source of great
support and comfort, and someone I know will take me seriously when things are at the
worst they could be!”

“I felt shunned at the church. A lot of the other members acted as though they didn’t
want to get close to me. A lot of people were afraid of me. The pastor didn’t want
anything to do with me. Therefore, I no longer attend any church at all. I watch church on
TV. I am already paranoid; I didn’t need anyone keeping their distance from me. It
makes me depressed to go to a regular church in person because of how I am treated.”

“My daughter suffers with schizophrenia and her episodes consist of reading the bible
and telling me I will burn in hell because her father and I were divorced back in 1988.
She then calls her father and me and tells us we need to get back together because it is a
sin to divorce and we will all burn in hell. She then hears the voices telling her it is
because of something she did and she will cry for days and walk in circles. This does not
happen of course, when she is taking her meds.”

Negative interactions could be further broken down into three subtypes; 1)
abandonment or lack of involvement by the church (60%), mental disorder considered the
result of demonic activity (21%), and 3) mental disorder considered the result of a lack of
faith / personal sin (19%). Consistent with the general survey data women were more
likely than men to describe negative interactions with the church (Women 40.6%, Men
27.4%; χ2(2) = 7.89, p = 0.019).
7
Discussion
The results of the present study suggest a high percentage (approximately 30%) of
mentally ill Christian congregants who seek counsel from the Church have interactions
that are counterproductive to successful treatment. These negative interactions appear to
be resulting in individuals limiting their involvement in the church or abandoning the
faith all together, thus removing a potentially vital support system in their ongoing
recovery (Fiala et al., 2002). More disturbing is the finding that the mental disorders of
women, significantly more than men, are being dismissed by the church.
Research has shown that women believe more strongly than do men in the role of
faith in healing (Mansfield et al., 2002). This may suggest that women in the church are
also more likely to believe explanations of mental disorders such as a weak faith,
personal sin, or demonic influence and avoid empirically validated treatments. This
limits their potential for recovery and puts them at greater risk for suicide. The
interpretation of the present results is limited by not knowing the denominations and
theological ideologies of the churches attended by the participants. It may be simply that
the women in the study went to more conservative churches and this is not an issue of
gender but ideology. However, it is also possible that misguided patriarchal views may
be influencing how a male dominated church leadership is counseling female
congregants. Further research is needed to better elucidate the underlying causes. An
additional limitation of the present study is that the results are based on a non-random
convenience sample composed solely of internet users. While a better sampling method
is needed in future studies the present results are consistent with previous research (Trice
& Bjorck, 2006).
8
An affirming religious support system can play a vital role not only in recovery from
serious mental disorders but also in their prevention (White et al., 2003). The present
results suggest that while a majority of Christian churches are sympathetic to members
with mental disorders far too many are not. Education and collaboration are our best
tools to overcome this problem (McMinn et al., 2003). Ignorance is simply not an excuse
for a community of believers that has been called to “bear one another’s burdens”. While
significant strides have been made towards bringing the Christian and mental health
communities together, more work is clearly needed.

PUT IT ALL IN THE HANDS OF THE LORD

The Israelites said to Gideon, “Rule over us–you, your son and your grandson–because you have saved us from the hand of Midian.” But Gideon…