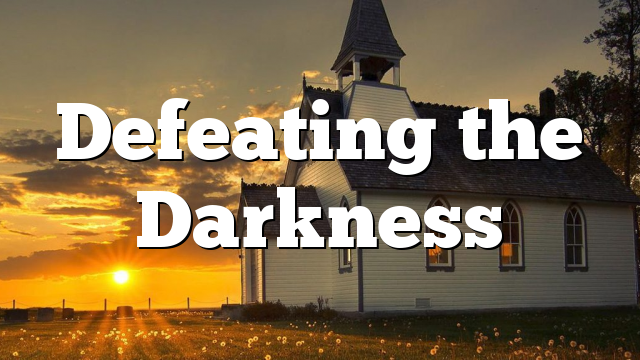 [This was written back in 2013 in the face of a lot of terriorsm around the world. Today we are seeing a lot of domestic terrorism and lawlessness, and even possible biological warfare from overseas. So, this message is still very appropriate for today. – Ray]

America is on high terrorism alert, issuing travel alerts and temporarily closing diplomatic posts in many parts of the world “due to the potential for terrorist attacks.” The amount of terrorism and war and persecution the USA has experienced has been significant yet minimal compared to some nations.

Let us agree with our brothers and sister everywhere that as the devil raises his ugly head to inspire evil people, that his works are foiled in Jesus name.

It is truly a spiritual warfare that we are fighting.
It is a sign of the last days.

We have been delegated spiritual authority, but many Christians are weak, complacent, unaware, and not participating in the united stand to hold back the darkness. We need to pray for them and encourage them, for all are needed to advance the Kingdom and bring in the harvest, standing together against the darkness.

“For though we walk in the flesh, we do not war according to the flesh. For the weapons of our warfare are not carnal but mighty in God for pulling down strongholds” (2 Cor. 10:3-4). This scripture and verses following apply particularly to our individual thought life, but they are equally valid for corporately standing against the enemy.

We’ve had still another wake-up call – in Boston – how many do we need?  The devil is stirring up lots of evil, and many of us have noticed increased attack in our own lives as well, even as we grow stronger and stronger in the Lord. The enemy is running scared.

The world doesn’t know what to do, but we Christians do, if we’ll wake up and stand strong in the Lord. We must join together as a mighty army, with the praise of God in our months, to wreak havoc on the enemy before he can get away with inspiring other evil plots, like the Newtown or Aurora massacres, or terrorism like at the World Trade Center or the Boston Marathon.

Remember, he is a defeated foe – defeated at the cross, and we have been delegated power and authority over him through the Holy Spirit Who indwells us. All the devil has left in his arsenal are lies and deceit and accusation, to cause confusion and hinder the work of the Lord and His people. But his lies can be effective if we don’t resist him, when people believe them, and when they stir up people with evil hearts. So, we need to be built up in faith-filled prayer, stand against the enemy with the Word of God, in Jesus name, and speak God’s Word of truth and light to expose the lies.

“Arise, shine; for your light has come, and the glory of the Lord has risen upon you. For behold, darkness will cover the earth and deep darkness the peoples; but the Lord will rise upon you and His glory will appear upon you. Nations will come to your light, and kings to the brightness of your rising” (Isa. 60:1-3).

This was spoken to ancient Israel, but this message has been brought back prophetically repeatedly in recent years to God’s arising church. We need to get more serious about prayer and believe for the light to shine in the darkness, not only to awaken the church, but to expose evil, with God opening the eyes of authorities and giving them wisdom to see and stop terroristic plots before they are carried out.

Not Just Wake Up, Stand Up!

In truth, it is time not only to arise, but to stand up in faith and together fight the battle in the spirit. “Be on the alert, stand firm in the faith, act like men, be strong” (1 Cor. 16:13).

When my mother would wake me for school as a child, it wasn’t enough to simply wake me, for when she left, I’d fall right back to sleep. No, to really wake up and get going with the day, I had to first stand up.

We are being called to more than just reactive praying for situations that have already taken place. They are wake up calls. We need to stand up and pray pro-actively against the plans and purposes of the enemy before he deceives even more darkened hearts into thinking that they can get away with evil atrocities.

Why is the pot being stirred at this time? Well, God’s Spirit is on the move, and a Great Awakening is about to break loose in these end times. In some places it already has. The devil sees what is happening, and he is not a happy camper. The atrocities we have been experiencing are diversionary tactics to cause fear and hold back the work of the Lord to save multitudes in these last days.

We must never forget that light drives out darkness, and that we have the victory. If we give in to the enemy’s tactic – his lies that cause fear – we won’t stand in faith to experience that victory.

Let us stand “strong in the Lord, and in the power of His might” (Eph. 6:10). It’s time to be proactive in prayer. Remember, we are the church, and “the gates of hell shall not prevail against it” (Matt. 16:18) as we take the battle to him, using our spiritual authority, backed up by the Blood of Jesus and the Holy Spirit. Firm in our faith, we can simply stand against the enemy in passing as we keep our focus on Jesus, not diverted from His Kingdom advance in our midst to bring in the great harvest.

No More Complacency in Perilous Times

Now is the time for prayer and consecration, standing up in His authority. No more complacency! The worldly life isn’t where it is at. The ways of God are so much more glorious than the ways of the world. He has given us everything we need for life and godliness. We know the back of the book – We Win! …

“These are perilous times. We must be fervent and effectually praying in the Spirit and with our understanding so we will know the wiles of evil men, and of the enemy of our souls,” Deborah Freeman writes, continuing, “knowing where to be and where not to be” for our own protection. “This is not the last time we will see crazy, evil behavior. Prayer will save our lives, the lives of our children, and heal our land. Prayer promulgates the Wisdom of God by giving us wisdom; then we give Him the glory. Prayer prepares us for the days to come and prayer prevents things like what happened” in Boston.

“We have no idea how many times other tragedies would have taken place but were stopped by prayer. Prayer will mess up the devil’s day and make our days powerful. We have a responsibility (let alone the privilege) of speaking to our First Love, and to be people given to prayer,“ she wrote.

But, “we are not ready, and for the most part, neither are we getting ready,” wrote Annie Hoffman Fentz. “Most (internet) prophets are busy polishing up their prophetic words for the itching ears of the church that only want to hear how wonderful we are and how all our dreams are going to come true. Again, I say, (myself included) if we are hurting and wounded…. get healed…NOW. Do what you have to do…seek out sozo, deliverance, and most of all, the Face of the Comforter and the Healer,” she wrote.

“It is Kingdom Building Time. As the world goes mad, the masses will be seeking truth, deliverance, healing, salvation,” Annie continued. “So, in this day, I am very challenged to ask myself: ‘Am I prepared to do that in an ever-increasing, intensely growing way?’ If not, then seek training – nose in my Bible – face toward Christ, and praying for truth, discernment and the growing ability to hear the Holy Spirit with crystal clarity.”

I see that as a clarion call to Christians. It’s time to get beyond preparing and into the doing that which God calls us to.

We have had much time to be healed and fixed up. It’s now time to step out. And for those who are still hurting, it is up to us all to encourage them and give them a hand to help them up, reminding them that it isn’t their own strength, but the Lord within. All are needed! Help them to see for themselves the way the Lord is leading, so that they don’t get left behind in experiencing the fulfillment of their destiny.

It is time to arise and stand tall in the Lord, being available for His use to pro-actively defeat the enemy before potential situations come to pass, letting the glory of His light shine forth, and speaking the Word of God to hold off the forces of evil until the full harvest (of all who will come in) is brought into the Kingdom.

Jürgen Moltmann: Creation and the Spirit of God

Jürgen Moltmann seeks to articulate a doctrine of creation for humanity that centers upon God’s creating and sustaining activity within the world. Recent ecological…