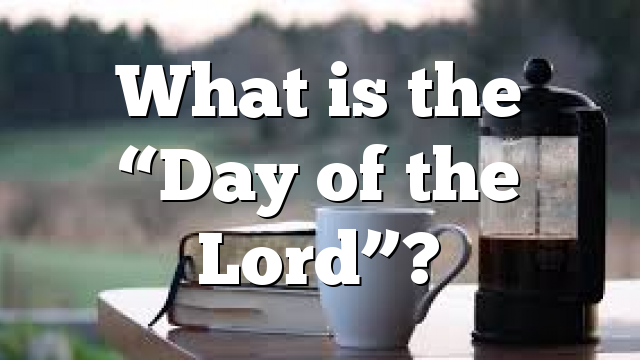 What is the “day of the lord”? When does it start, end and what is it’s purpose.

John Kissinger [01/15/2016 3:34 PM]
Elijah has already come, and they did not recognize him, but have done to him everything they wished

Ricky Grimsley [01/15/2016 8:35 PM]
Only in part the sun didnt go dark and the world end and a day of vengeance start. Its the same way that jesus fulfilled half of Isaiah 61:1-2 KJVS
[1] The Spirit of the Lord God is upon me; because the Lord hath anointed me to preach good tidings unto the meek; he hath sent me to bind up the brokenhearted, to proclaim liberty to the captives, and the opening of the prison to them that are bound; [2] To proclaim the acceptable year of the Lord , and the day of vengeance of our God; to comfort all that mourn;
He left off the vengeance part when he quoted in the temple because he will do the vengeance stuff at his second coming.

John Kissinger [01/16/2016 10:06 AM]
Obama’s Strategic Move To Fulfill Prophecy is on a fast track. Hosea chapter 12 speaks of the United States and how the leaders would make Assyria a desolate nation, but Nineveh is spoken of separately and it seems all the forces of evil are concerned over this city in North West Iraq. Boots on the ground by the US Soldiers is only going to make things worse. https://www.youtube.com/watch?v=PbrLw3Cgj-I&feature=youtu.be

John Kissinger [02/03/2016 7:58 AM]
Ricky Grimsley has posed a very important question here, which I do not wish to fork to another thread so we can keep it together.

What is the “Day of the Lord”?

Luchen Bailey has otherwise wrote a post on Rev. 1:10 where the Lord’s day was viewed as Sunday in some later (predominantly corrupt Orthodox) MSS Terry Wiles

What is the Pentecostal understanding of the Sabbath day?

While we’re far from claiming the Return of the Lord will be on a Saturday or a Sunday, how are we to interpret ALL these Bile references and uses of the last Day of the Lord terminology in search of sound hermeneutics for the last days William DeArteaga Stan Wayne David Lewayne Porter David M. Hinsen

LORD’s DAY: A full list of all fulfilled and not-so fulfilled prophecies for 2015 and upcoming 2016-17 – What happened and what not? http://www.pentecostaltheology.com/a-full-list-of-all-fulfilled-and-not-so-fulfilled-prophecies-for-2015-and-upcoming-2016-17-what-happened-and-what-not-plus-20-signs-of-the-lastdays-renewed-revised-and-revisited-ourcog/

Scot McKnight: Open to the Spirit

Scot McKnight, Open to the Spirit: God in Us, God with Us, God Transforming Us (New York: Waterbrook, 2018), ISBN 9781601426345. New Testament scholar Scot McKnight is not your typical seminary professor with a doctorate from the University of Nottingham. Whereas many scholars focus on writing for the academy, or on technical commentaries for seminary-educated […]