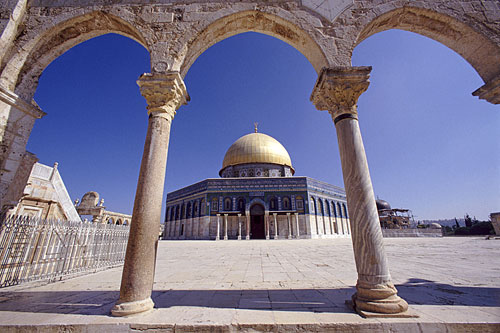 Could the dome of the rock be the abomination of desolation? ?

John Kissinger [09/18/2015 11:11 PM]
But according to Jewish tradition, Mount Moriah, now under the Dome of the Rock, is where the Temple’s Holy of Holies was situated. http://www.jpost.com/Jewish-World/Jewish-Features/Can-Third-Temple-be-built-without-destroying-Dome-of-the-Rock

Alan N Carla Smith [09/18/2015 11:20 PM]
I believe that some archaeologist will discover that the actually Temple/Holy of Holies was built near this area but not exactly under the Dome of the Rock and that will satisfy both traditions. Then the 3rd temple can be constructed in just a matter of months! “the Temple Institute has been working day and night for the past 23 years to create everything that the inside of the Temple will need. So you might say that the hard part is already done.”

John Kissinger [09/18/2015 11:24 PM]
The Temple Institute has in recent years determined that they can in fact build the temple under the Dome without destroying it. Some claim to have information that the Arc of the Covenant is already located there

John Kissinger [09/18/2015 11:26 PM]
that’s what they’re saying – build it under the Dome but without destroying it. Underground technology is already there…

Alan N Carla Smith [09/18/2015 11:27 PM]
oh.. I see what you’re saying now. Do you really think that Yehovah will want HIS Temple built under ground?? I don’t! We will see!!! Jubilee is upon us and maybe Yehovah will GIVE Israel back the promised land!!! Hallelujah

David John Maxfield [09/19/2015 2:28 AM]
Revelations tells us that his temple , the New Jerusalem is built in heaven and will decend out of Heaven upon his return

David John Maxfield [09/19/2015 2:30 AM]
I’m not sure what will happen there, all I know is no Muslim will share the dome or the Holy Land with the Jews and neither will the jews share it with the Muslims. They have hated each other like Cain and Abel from the beginning.

John Kissinger [09/19/2015 2:31 AM]
like in the movie “Independence Day” there’s you a reason why Pentecostals were not allowed in the movies back in the day of Charles Page You give a Pentecostal too much imagination and the heavenly temple lands on the Dome…

David John Maxfield [09/19/2015 2:31 AM]
And to be honest if they don’t accept Jesus by the time he returns and the new Jerusalem decend out of Heaven then they won’t have any temple at all because if they haven’t accepted Christ then they will be in Hell

David John Maxfield [09/19/2015 2:32 AM]
Hahaha well let’s hope and pray 🙂 God wishes that none should perish but that all should come to repentance and knowledge of the truth.

John Kissinger [09/19/2015 2:33 AM]
aren’t you glad you watched independent day and not judgment day? then you may have seen Jesus as the #terminator

John Kissinger [09/19/2015 2:36 AM]
well being ready is to know if the Judge is Dred, Arnold or Trump http://dishnation.com/arnold-schwarzenegger-to-replace-donald-trump/

Gerald Creasy [09/19/2015 3:59 AM]
If a new temple is ever made the priest who offers sacrifice is The Antichrist, because The New Testament tells us REPEATEDLY that Jesus is the High Priest FOREVER and that his sacrifice is final. A new temple High Priest would be giving the middle finger to the atoning work of Jesus Christ

FacebookTwitterSubscribe
Subscribe to receive all news to your email or phone: [wysija_form id="1"]
abominationdomerock