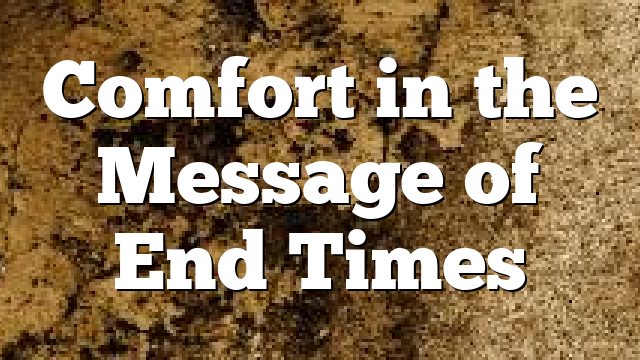 COMFORT IN THE MESSAGE OF END TIMES – Ray E Horton

Many of us have believed in a pre-tribulation rapture. And it would be nice if it happened that way. But there are solid scriptural arguments against it as well as for it.

Might a post-tribulation rapture and the Second Coming of Jesus be one and the same, as Jesus catches us up on His return, and brings us with Him for the final battle, then to reign with Him? That is one of several end-times views that have been deduced from Scripture, but whatever happens, the Apostle Paul tells us to “comfort one another” with the message. The good news is:

“For God has not appointed us to wrath, but to obtain salvation by our Lord Jesus Christ” (1 Thess. 5:9).

Focus on the Good News

My Bible reading this morning was in 1 Thess. 4 and 5. As I’ve said often in the past, I believe a focus on eschatology, that is, end times, can be a real diversion from our proper focus on the Good News. We are told we will know the signs of the times, but not the day or the hour.

Since scripture is used to try to prove various end-times expectations, maybe all we need to know is to be sober – ready, awake and alert

Also, since scripture can be used to try to prove end-times expectations in several different ways, because it isn’t completely and exactly spelled out, maybe all we need to know is to be sober – ready, awake and alert (1 Thess. 5:6). In other words, it’s a matter of faith, always staying close to the Lord. But we all hear from time-to-time different end-time teachings, so, as an encouragement, let’s take look (but not stay focused there).

Here is Paul’s description of the end to the Thessalonians: “For this we say to you by the word of the Lord, that we who are alive and remain until the coming of the Lord will not precede those who are asleep. For the Lord Himself will descend from heaven with a shout, with the voice of the archangel, and with the trumpet call of God. And the dead in Christ will rise first. Then we who are alive and remain shall be caught up together with them in the clouds to meet the Lord in the air. And so we shall be forever with the Lord. Therefore comfort one another with these words” (1 Thess. 4:15-18).

I note in particular that last verse, to “comfort one another with these words.” If believers had anything to fear, he surely wouldn’t have written that. We can be comforted in knowing that we will then physically meet the Lord, be made whole in glorified bodies, and reunited with all the believers of the past, including our deceased love ones.

“Then we which are alive [and] remain shall be caught up together with them in the clouds, to meet the Lord in the air: and so shall we ever be with the Lord” (1Thess. 4:17). This could describe a separate rapture, or the second coming, which would include a rapture of the saints.

I do like Andrew Wommack’s teaching on the subject, even though I would not be dogmatic about it. He says in his commentary on this verse: “There is no disagreement that the Lord is coming back and all the saints will be caught up to meet the Lord. But there is no clear doctrine of ‘a rapture’ in scripture where the believers will be caught up prior to the tribulation described in the book of Revelation. The doctrine of the rapture cannot be substantiated on this passage of scripture. It is just as logical to interpret this as the second coming of Christ as to believe it is depicting ‘the rapture.’”

Getting back to 1 Thess. 5:9, quoted at the top, brother Wommack has this to say: “This is another passage of scripture that those who teach a rapture lean heavily upon. The reasoning is that the book of Revelation shows an unprecedented wrath of God released on the earth during the tribulation. Therefore, the believers must be gone because, ‘God hath not appointed us to wrath?‘

“There are at least two things wrong with this thinking.

“First, the book of Revelation does show there are believers who are present on the earth during the tribulation (ex. Rev. 6:11;7:2-4; 11:3; 13:7-8; 14:13). Regardless of what kind of believers you say these are, some Christians will go through tribulation. That renders this reasoning invalid. But that doesn’t mean they are experiencing God’s wrath.

“Secondly, the Christians will be miraculously spared the plagues of God just as the Israelites were during the ten plagues in the land of Egypt. They went through the plagues, but the plagues didn’t touch them. Likewise, Christians will be miraculously spared the wrath of God during the tribulation. They will be on the earth but that doesn’t mean they will experience God’s wrath. No! That is reserved for His enemies (Nah. 1:2).

“The motivation of many for believing in the rapture theory is a misunderstanding concerning the judgments of God in the book of Revelation. They miss the fact that Revelation is showing the judgment of God on the ungodly only. Believers will be able to be sustained supernaturally just as they have always been. There will be persecution, but if one thinks the Lord would never allow His people to go through persecution, he is sadly misinformed about Church history. Everyday Christians around the world are being martyred.

“We cannot fabricate a way of escape just because we don’t like what’s coming. We need to put our faith in Christ and endure until the end just as countless generations of believers before us have done.” [Emphasis is mine – Ray]

[This article is not meant to generate an argument about end times, but simply to comfort those who have believed in a pre-tribulation rapture. Whether there is or not doesn’t really matter, since He is our protector. So, when they hear other arguments, like this one, which demonstrate that we may still be here at the time of the tribulation, we can still be assured that we will not, as believers, have to be concerned for ourselves with the end-time dealings of God.]

FacebookTwitterSubscribe
Subscribe to receive all news to your email or phone: [wysija_form id="1"]
comfortEndmessagethetheologytimes

Carlie Terradez had an NDE and found herself before Jesus at Heaven’s gates. Find out what Jesus said to her. Join Sid Roth and…