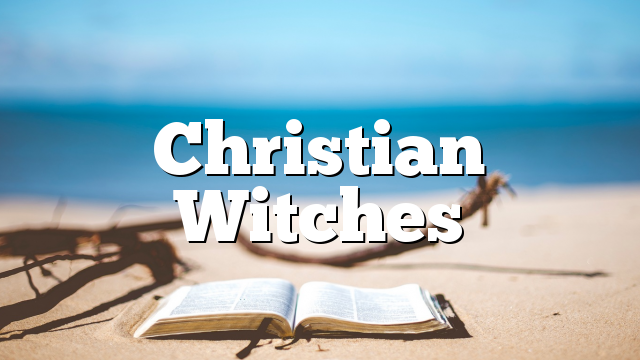 Amazingly there are witches in the church! Some people claim Christ but actually behave more like a witch. Find out the difference. Rev. Neil Steven Lawrence preaching on “A Higher Place.”

I know of course that actual dedicated witches attend churches and try to distract the plans and bring down people. The video teaching was not really focusing on that, but I was emphasizing that some people who call themselves Christians and think that they actually are, still have the same attitude as witches.

They say, “in Africa Christianity is a mile wide and an inch deep.”

Africa is now the largest Christian continent (in total population) in the world.
America was founded on Christian principles and has flowered as the greatest example of Christian influenced culture and governmental principles in the history of the world – without a doubt!
But now in this post modern times it is rapidly sliding downward to adopt ideologies and worship which can only be characterized as “inspired by witchcraft!” Sadly it appears that this slide may take less than 150 years – in my opinion it will end with the rapture!

Jesus’ Power Over Demons Today
Ten years ago this month, my team Eagles’ Wings Gospel Team and I were preaching a series of Crusades down at the coast of Kenya (which is filled with Muslims).
One evening as I was praying for people at the altar in a place where our Regional Overseer (Benea Alukwe) has his church (Likoni), there were about 30 people in the altar wanting prayer from me after I preached the Word. All of a sudden, a woman hit the ground and started rolling around. I jumped down off the stage with my interpreter and began to lay hands on the woman, rebuking the demon(s) that were troubling her.
Now, keep in mind, that whole area of Kenya speaks Swahili and their own mother tongue (tribal) language. English is only learned as a subject in school.
As I began to bind the demons, funny enough, many of the needy people in the altar turned their attention toward the woman and also began to pray against the demons! The demon(s) in the woman were speaking in English (in a Swahili area) – saying, “I am not gonna go! I am not going!” Etc. I knew right away that the evil spirit(s) were speaking to me because they were using English. They were trying to intimidate me. I did not shrink back but continued to pray for the woman. We all prayed for some minutes. She calmed down and sat up.
Then the church elders and area pastors took her over to the side of the stage and continued to pray for her while we closed out the meeting. (Sometimes it’s important to get demon-troubled people out of the way because the spirits want to disrupt the meeting.)
Afterwards, she gave her testimony. She had been hearing voices for sometime, and when our Crusade was proclaiming the Gospel and praising the Lord at such a high volume, the whole area of Likoni was hearing—including her. She came to the meeting and got delivered. She became a long-term member of the Likoni Church of God!! The power of Jesus’ name has manifest throughout the ages, for Jesus is the Truth of the Ages!

Here are the sermon notes for my message in the video (it’s not word for word:
Christian Witches

Give Examples of Western Witchcraft > the belief in Christ brought the people out of their witchcraft mind & replaced it with eternal values.

I. Summary of Witchcraft:

C. Foundation of Witchcraft:
1. Based on jealousy, fear, hatred, superstition, fear of death, idolatry, false understanding of God
2. Practiced mostly on family members and close acquaintances
3. Mostly has power over those who believe in it
4. Approaches spiritual & physical world w/ attitude of “giving to get.” (white goat, black chicken). *****
5. Remember Simon the sorcerer in the book of Acts when he saw the spirit move on the people he approached the Apostles to buy that spiritual power from them. Peter rebuked him for this attitude. *****
6. A person who believes & practices witchcraft is proud & does not want to give the control to God, but wants to control their own reality.
7. A person who has a witchcraft mind hides their true motives and cannot risk being transparent for fear they will be harmed by others.

II. We have Witches in the Church
* A. their mind has not been renewed & their culture & thinking is still on the level of Witchcraft.
* B. the main reason people don’t tithe is because of greediness based in witchcraft > “if she tithes and he tithes and they tithe – the pastor will have more than us.”

III. 3 Scriptural Examples:
A. Cain & Abel – Worshipping without being concerned about your relationship with God & other people is a form of witchcraft.
Cain did not worship like God told him to worship; he brought vegetables instead of the blood of an animal.
Gen. 4:5-7 “So Cain was very angry, and his face was downcast. Then the Lord said to Cain, “Why are you angry? Why is your face downcast? If you do what is right, will you not be accepted? But if you do not do what is right, sin is crouching at your door; it desires to have you, but you must master it.”
The proper attitude is:
Romans 12:9 “Honor one another above yourselves.”
Romans 12:15 “Rejoice with those who rejoice, mourn with those who mourn.”
John 11:47-48 “Then the chief priests and the Pharisees called a meeting of the Sanhedrin. “What are we accomplishing?” they asked. “Here is this man performing many miraculous signs. If we let him go on like this, everyone will believe in him, and then the Romans will come and take away both our place and our nation.”
Ecclesiastes 8:10 “Then too, I saw the wicked buried—those who used to come and go from the holy place and receive praises in the city where they did this. This too is meaningless.”
It doesn’t matter what others are doing – or not doing > what matters is: “are you doing God’s will?”
I John 4:20 says, “If anyone says, ‘I love God,’ yet hates his brother, he is a liar. For anyone who does not love his brother, whom he has seen, cannot love God, whom he has not seen.”

B. Saul & David –Christian witches abuse power. They try to worship while being more concerned about what men think & want than what God thinks & wants. > This is a form of witchcraft.
1. Saul tried to use worship for his own gain and lost his kingdom.
a. He was impatient & unwilling to wait upon the Lord & his servant, Samuel.
b. He was afraid of what his men would think instead of what God thinks.
c. When the Spirit of the Lord had been removed from him he was desperate to hear from the Lord, so he consulted a medium to try and hear from Samuel (who had already died). This was forbidden in the Law & an obvious deception.
– Christian witches are willing to be deceived because they don’t believe what God says about the afterlife & about spiritual things.
d. Illustration:

Ugali to babu. This is self deception.
1. But Jesus said to the thief on the cross, “Today you will be with me in Paradise.”
2. Paul taught, “it is appointed unto man once to die and then the judgement.”
3. David worshiped the Lord with his whole heart throughout his life time.
a. As he danced before the Lord he was not worried about his own dignity.
b. As he sacrificed to the Lord after the plague stopped, he was unwilling to sacrifice something that cost him nothing (II Sam. 24:24)
c. The attitude David had is opposite of the attitude of XN Witches!

C. “In My name . . .” John 14:12-14; 16:24 – does not involve manipulation but instead involves all that is in Jesus’ name > His name is His will. Claiming His name is prayer in accordance with all that He is > His being
– XN Witches use the name of Jesus like a magic formula!

D. “You will do greater things than I have done.” John 14:12b
– XN Witches can never feel comfortable giving power to someone lower than them!

F. “You will receive power to be My witnesses (martyria)” Acts 1:8 – this is not power for powers’ sake but power to die so Jesus can be seen.
-XN Witches refuse to die to themselves – in the Kingdom this is the true path to greatness.
Saul try to make himself great and lost his kingdom; David trusted in the Lord and the Lord made him great.

C. Judas & John – XN Witches worship without realizing God is before them > this is a form of Witchcraft.
The Bible says we are the temple of God.
The Bible says, “we are seated with Christ in God, in heavenly places.”

1. Judas: Don’t feel sorry for Judas; there are many Judases among us today!
Judas lacked a true love for Jesus. “Greater love has no one than this, that he lay down his life for his friend.” (John 15:13)
2. John is called the beloved disciple, not because Jesus loved him more than He loved the other disciples, but because John loved Jesus more than the other disciples loved Jesus.
a. I John 4:18-21 “There is no fear in love. But perfect love drives out fear, because fear has to do with punishment. The one who fears is not made perfect in love. 19 We love because he first loved us. 20 If anyone says, “I love God,” yet hates his brother, he is a liar. For anyone who does not love his brother, whom he has seen, cannot love God, whom he has not seen. 21 And he has given us this command: Whoever loves God must also love his brother.”
Christian Witches claim a relationship with Christ Jesus but they have not:
CAIN
1. fully surrendered
2. realized the true nature of worship
SAUL
3. learned how to prefer the truth and be honest before God
4. feared God more than man
JUDAS
5. practiced God’s presence
6. allow love to be the guiding principle in their lifec