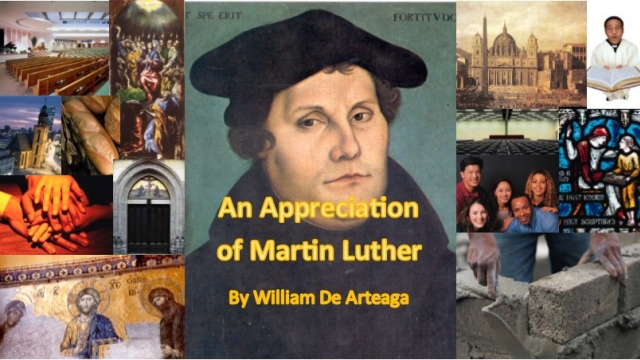 I was raised in the 1950s, in the pre-Vatican II Catholic Church, and was taught that Martin Luther led the “Protestant Revolt” against the Catholic Church. Worse, he was largely responsible for “rending the unity” of the Universal Church. Even today, when Catholics no longer attack Luther directly, they often slyly point out how many thousands of Protestant denominations there are – some of them quite weird.

Actually, that accusation against Luther is much exaggerated.  The fact is that the Church had already been “rent apart” several times over. Eastern Orthodoxy had separated from the Western Church in 1054, centuries before Luther was born. Even earlier, in the Third Century, the Western Catholic and Oriental Orthodox Church (Coptic) had done the same, and the Nestorian Church of late Antiquity, at one time the largest among the Christian groupings, had long been separated and independent.

All these divisions, including Luther’s contribution, seemed to be a wicked disobedience of Jesus prayer for the Church to be one (John 17). Indeed, it has been especially shameful how Christians of different groups and denominations often persecute each other. This began as early as the Third Century when Oriental Christians (now the Coptic Church) and Western Christians in North Africa started going at each other – killing the other’s priests, and burning their churches.[1] The worst of this happened in the Thirty Years War (1618-1648) when Protestants and Catholics fought each other to exhaustion, and were forced to accept that Church unity could not be brought about by exterminating the other side.

Luther’s prophetic reproof of Catholic abuses and his insight into salvation by grace alone did not cause the Church’s fragmentation.Yet things have gotten a lot better since the mid-Twentieth Century. This is not due to the tireless (to avoid the word “boring”) inter-faith ecumenical conferences, but mainly due to the work of the Holy Spirit in bringing real friendship, joint actions and prayers among the whole spectrum of Christian denominations. The key has been to downplay the importance of theological and philosophical distinctions and instead concentrating on the Lordship of Jesus. I had a personal illumination about this as a young Charismatic Catholic going to my first Full Gospel Businessmen’s Fellowship International breakfast meeting at a local hotel (circa 1975). There were over a thousand believers worshiping and witnessing about the works and graces of the Lord without a word of theological discourse.  No Catholic stood up and said, “Why don’t you accept Mary as ‘Mother of God?’” and no Baptist shouted, “I don’t like the stupid Catholic belief in ‘transubstantiation.’”  (The big issues of the Reformation).[2]

Now back to Luther. Luther’s prophetic reproof of Catholic abuses and his insight into salvation by grace alone did not cause the Church’s fragmentation. Rather it was mainly the reactions of the Catholic hierarchy that would not accept his reproof that forced the division. Catholics now have to admit to this since as they have recently accepted that Luther was right about the core issue, salvation by faith alone.

This is real Pentecostal faith!