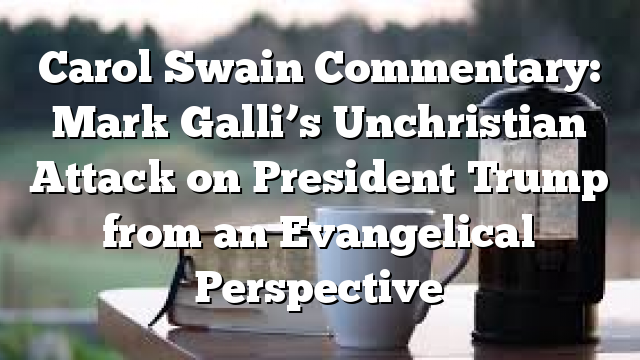 On the website below is a rebuttal by Carol Swain entitled Mark Galli’s Unchristian Attack on President Trump from an Evangelical Perspective, offered as a follow up to my lead article. I have also included a listing of her credentials below. Though published on December 23, 2019, I think it constructively contributes to this most important and relevant discussion facing our nation.

In her article she also makes mention of rebuttals by other believers such as historian Jim Garlow, Franklin Graham, Pastor Jentezen Franklin, Everett Piper, Edward Bauer, and Dr. James Dobson – which I list again here for your convenience. Obviously, this is an ongoing debate that will continue to at least the election in November. Leonard J. Ransil

Professor Swain earned a magna cum laude B.A. in criminal justice from Roanoke College and a master’s degree in political science from Virginia Tech. While an undergraduate at Roanoke College, she organized a scholarship fund for black students that by 2002 had an endowment of $350,000. She finished a Ph.D. in political science from the University of North Carolina at Chapel Hill in 1989. In 2000, she earned a Master of Legal Studies from Yale Law School. She received tenure as an associate professor of politics and public policy at Princeton University. From 1999 to 2017, she taught political science and law at Vanderbilt University. She retired from her post at Vanderbilt in 2017.
Her first academic book, Black Faces, Black Interests: The Representation of African Americans in Congress, was published by Harvard University Press in 1993. The book was cited by Anthony Kennedy and Sandra Day O’Connor, two Associate Justices of the Supreme Court of the United States. It was the recipient of the D.B. Hardeman Prize as well as the American Political Science Association’s Woodrow Wilson Foundation Award.

Can we get every church to start praying for these men?

Can we get every church to start praying for these men? Everyone share this. How to stop ISIS??? Pray. Here is a list of…