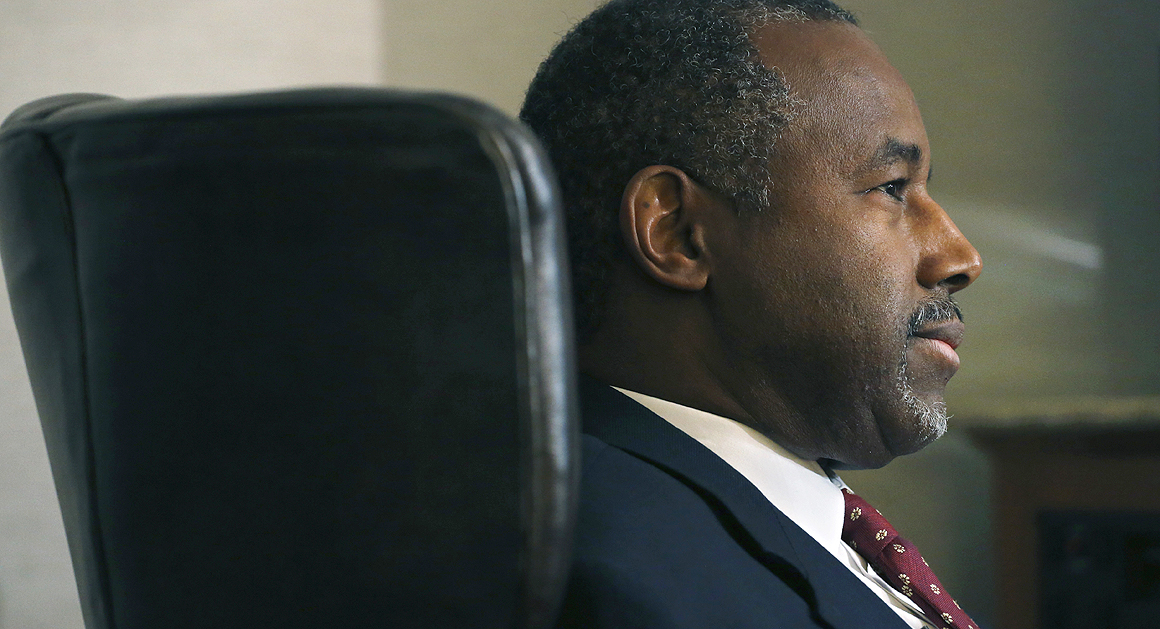 The academy has occupied a central place in Carson’s tale for years. According to a story told in Carson’s book, “Gifted Hands,” the then-17 year old was introduced in 1969 to Gen. William Westmoreland, who had just ended his command of U.S. forces in Vietnam, and the two dined together. That meeting, according to Carson’s telling, was followed by a “full scholarship” to the military academy. West Point, however, has no record of Carson applying, much less being extended admission…

Tom Steele [11/06/2015 1:52 PM]
Just remember the likely alternative, a demonized person who doesn’t try to hide her evil intentions, but comes right out and tells you her plan, a plan that outright opposes what Christianity stands for. So what if this guy lied and is in a cult, that cult is a whole lot closer to Christianity than anything Hilary Clinton is involved with and Carson’s views as a member of the SDA are a whole lot more likely to benefit the Christians of the U.S.A. as well. Stop focusing on specific points of negativity and focus on the bigger picture. We’re NOT going to be given a truly Christian candidate unless there is a MAJOR shift in things in the very near future. People didn’t vote for Mitt Romney because he was a Mormon, and as a result we got four more years of Obama’s anti-Christ agenda. Are we REALLY going to be so stupid to allow the same thing to happen again?

Joe Collins [11/06/2015 1:55 PM]
Apparently u haven’t read revelation. Or you would know exactly how America is going to go. Your vote can not stop, slow down, or change prophecy in the bible, but u can still vote bible.

But have fun justifying yourself to God.

Joe Collins [11/06/2015 1:59 PM]
And the big picture is God’s plan and the book of revelation. Not the next election or four years. You delude and fool yourself because you have tried for so long to justify your self to God and others that now you have convinced yourself of it.

We’ve had this discussion before. You would rather vote one sin in than another and think that honors God. You are greatly deluded and I’m done with your illogical and sinful answers.

Link Hudson [11/06/2015 3:36 PM]
It’s possible he went to a dinner in February, was introduce to the general as the top ROTC cadet, and the general said he could look into getting him into WestPoint for an all-expenses paid education, and Carson didn’t explain the situation very thoroughly. Does he actually say it was a ‘fabrication.’ If he (a top ROTC cadet who was black) was talking about a conversation with a general, then there may not have been any record of a formal scholarship.

Carson seems like a nice guy. I don’t get why he is doing so well in the polls. Is he articulate enough to go up against whoever the Democrats choose? What does brain surgery on infants have to do with running a country?

John Kissinger [11/06/2015 3:37 PM]
Link is right. Carson speaks straight on many national issues; therefore, it’s surprising he was a bit crooked on his own story

Lawrence Bradford [11/06/2015 3:49 PM]
The smart people on here may I ask the question. Do you think any of the people running for president in either party has never lied? I’m sure you all know they have, so another question is this. Why is Ben Carson the only being talked about?

John Kissinger [11/06/2015 3:50 PM]
We’ve spoken about Hillary, Trump and others. Carson seemed to be held to a higher standard until now. But you’re right – they all lie

Link Hudson [11/06/2015 3:59 PM]
John Kissinger Is this an actual intentional lie, though? He could have gotten the dates mixed up and told about a conversation. It’s feasible that a general might tell a top ROTC candidate who was black that he could get him into Westpoint. If admission comes with a ‘full scholarship’, then that’s not intentionally lying.

I’m not a Carson supporter. I would be probably if he were the nominee, or at least I’d consider him as a candidate versus Hillary.

John Kissinger [11/06/2015 4:49 PM]
The key word here is “fabricated.” Did the Carson campaign admit any such thing? Absolutely not. http://www.dailywire.com/news/960/no-ben-carson-didnt-lie-about-west-point-its-ben-shapiro

Jon Sellers [11/07/2015 8:03 PM]
No I don’t think so. Politico’s hit piece is constantly being revised. I think they’re on their third revision right now. Others have exposed falsehoods and distortions found in the Politico piece. Also the voters are extremely unhappy with the liberal media so this actually feeds into Carson’s base of support. And finally his recollection and his understanding of how West Point worked at the time may not have been 100% accurate but the gist of his understanding was accurate.

George Witzke [11/07/2015 9:58 PM]
Politico has all but apologized at this point… Be careful what you actually believe

Bill Morgan [11/08/2015 4:43 AM]
as a COG member in Canada. Is COG promoting a Democrat to be President. A gay agenda, abortion agenda, removing JESUS, supporting party? Bill Morgan

Link Hudson [11/08/2015 12:39 PM]
IMO, it seemed likely that Politico, whatever that is, was twisting the facts from comparing the article with the headline.

Jon Sellers [11/08/2015 3:32 PM]
The media gave no scrutiny to Obama’s story or sketchy past. But we can expect all kinds of “investigations” of Carson or whoever is a threat to Hillary.

There is no perfect human being. I am more interested in real character issues such as Hillary’s real and continued lying about Benghazi and the corrupt financial dealings of the Clinton Foundation.

Link Hudson [11/09/2015 3:47 PM]
I think, content wise, what he said in the clip was good. But it highlights why I don’t get why people want to follow him. He seems to have a lack of oratory skills. I don’t know how else to frame it. He doesn’t speak that plainly, and here, when he gets excited, he sounds high-pitched and whiny. I’m not saying I’d sound perfectly polished, but oratory skills, presence and gravitas and all that stuff are important for leading the country. I really don’t get the support for him.

I don’t get why people support Hillary, either, other than her representing the Clintons, who liberals like. She screeches sometimes when she talks, and she can be rather negative.

I’d probably vote for Carson over Hillary. I’d probably vote for any of the Republicans in the last debate over Hillary. But on my list of favorites, Carson is not on the top. He’s above Trump who doesn’t have government experience, because I don’t think Carson will go around insulting world leaders. But he’s somewhere below Rubio in who I’d want to win the nomination.

The BEGINNING of the END

[Please be blessed as you read these scriptures.] “THE REVELATION OF JESUS CHRIST, which God gave unto him, to shew unto his servants things…