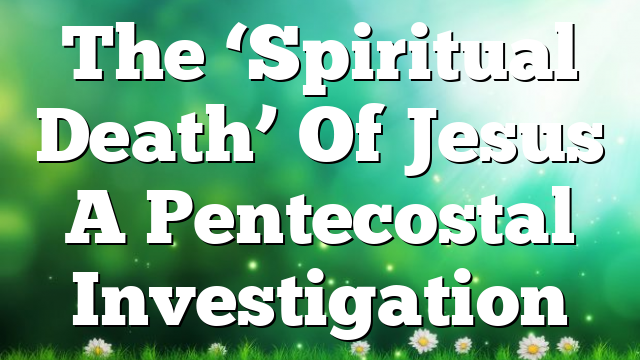 When Jesus went to the cross, he suffered agonizing separation from God the Father — a separation that might be described as spiritual death. At that moment, Jesus fell completely under the dominion of Satan and even partook of Satan’s own nature. This suffering con- tinued after Jesus’ death, as he descended to the realm of the dead and endured hellish torments inflicted by the devil. Not Jesus’ physical death alone, but this prolonged spiritual agony as well, was an essential part of the work of atonement for sin. While in hell, Jesus experienced spiritual rebirth just prior to his resurrection on Easter morning. Such, in sum- mary, is the teaching that “Jesus died spiritually” (JDS) that has been offered (in fuller or more partial versions) by E. W. Kenyon, Kenneth Hagin, Sr., and Kenneth Copeland. Some critics of the Word-Faith movement have labeled JDS a heresy. Others see JDS’s emphasis on spiritual rather than physical death as a reﬂ ection of the metaphysical views of late 1800s New T ought — the so-called “cultic origins” theory of Word-Faith teaching. Still others speak of JDS as a “peculiar atonement mythology” or as “spiritual vaudeville” (59, 227n46). Yet through a careful consideration of JDS, analysis of the biblical exegesis that underlies JDS, wide reference to the larger historical-theological context (for example, Gregory of Nyssa, Augustine, Aquinas, Luther, Calvin, Barth, Moltmann, Balthasar), and to major studies of Kenyon (by Dale Simmons, Geir Lie, and Joe McIntyre), Atkinson has advanced the discussion to a wholly new level. This work — the ﬁrst book-length academic study of JDS — draws on an extensive popular literature, articles at websites, and transcrip- tions of sermons, applying a keen theological intelligence to this heterogeneous material. The book is a stunning achievement — one of the weightiest works yet written on any aspect of the Word-Faith movement.

Atkinson’s argumentation is exceptionally clear, cogent, and charitable. He pays the Word-Faith teachers the ultimate compliment of evaluating their ideas with painstaking care and a determined eﬀ ort to eschew premature judgments. One of the book’s major conclusions is that JDS was the product of Kenyon’s fertile mind. T ough Kenyon was an eclectic thinker who may have been inﬂ uenced by non-orthodox New T ought authors and by orthodox Higher Life and Faith Cure teachers, Atkinson demonstrates that there is little evidence to show that Kenyon’s JDS was directly drawn from either of these two broad streams. With the sole exception of the little-known Henry C. Mabie (1847-1918), none of the major authors who may have inﬂ uenced Kenyon used the explicit terminology of “spiritual death” and applied the term as Kenyon did; and Kenyon seems to have taught JDS before Mabie did. Another conclusion is that JDS is not a reworking of such earlier themes as the ransom to the devil theory, the descent of Jesus into Hades or hell, and the doctrine of theosis. Afinities between JDS and earlier teachings (and/or heresies) are more apparent than real. JDS is a twentieth-century innovation, even though earlier thinkers spoke of Jesus’ suﬀ ering on the cross as an “eternal death” (John Calvin), “soul-death” (C. H. Spurgeon), or “spiritual agony” (R. W. Dale). A novelty of JDS is the notion of Jesus’ redemptive suﬀ ering after his death.

(requiring that God place Jesus temporarily in Satan’s control), and an intra-trinitarian dualism (requiring that the Father “turn his back” on the Son). Atkinson notes that unitary anthropology — of the kind assumed in the late twentieth century — does not allow sharp separation of the spiritual from the physical death of Jesus. Yet since Augustine, Luther, and Calvin were all anthropological dualists, such a separation is hard to label as heresy. T ough he criticizes JDS, Atkinson also criticizes JDS critics for reductionism in emphasizing only the bodily suﬀ erings of Jesus and not his sense of anguish, shame, rejec- tion, or God-forsakenness.

Atkinson shows that biblical evidence for Jesus’ post-death suﬀ ering is lacking. While proponents of JDS appeal to the “cry of dereliction” in Matthew and Mark, they struggle with Luke (“today you will be with me in paradise,” “Father, into your hands I commit my spirit,” Luke 23:43, 46) and John (“it is ﬁ nished,” John 19:30). Even the cry of dereliction might be a sign of Jesus’ ultimate trust in the Father. The separation of Father and Son is not absolute since “God and Christ remained utterly at one in their determination” to bring salvation (82). The idea that Jesus shared in the “satanic nature” — an idea Hagin dis- avowed — might cast doubt on Jesus’ divinity, though Atkinson suggests that this is not necessarily the case. He asks whether JDS Christology is implicitly adoptionistic in seeking to highlight the relevance of Jesus’ victory for believers: “Don’t you realize that a reborn Man . . . whipped Satan in his own territory[?]” (Copeland, cited p. 152). An issue not fully addressed is Kenyon’s notion that the New Testament Gospels fall into “the realm of sense knowledge” while the Pauline letters are “revelation knowledge” (68, 88) — an idea with disturbing parallels in ancient Gnosticism.

Today a ﬁ erce debate rages over atonement theology, with some describing traditional teachings as divine “child abuse” and embracing a neo-Socinianism that denies salviﬁ c efi- cacy to Jesus’ death while afirming his death as an example. Kenyon and other JDS teach- ers have unapologetically asserted the salviﬁ c eficacy of Jesus’ suﬀ erings. This ought to be considered by those who allege that JDS is a heresy. Nonetheless, The ‘Spiritual Death’ of Jesus oﬀ ers a clear rationale for its conclusion that “the value of JDS doctrine is limited” and that the Word-Faith movement might do better without it (261-62). With his lucid analy- sis of the issues posed by JDS, Atkinson has done a service for Word-Faith preachers and for their critics, both of whom would neglect this book at their theological peril. T is book is essential reading for anyone who wishes to understand the Word-Faith movement.

Pentecostal Spirituality: A Passion for the Kingdom

A Review of Pentecostal Spirituality: a Passion for the Kingdom by Steven J. Land. in Journal of Pentecostal Theology. Author: Harvey Cox. Jesus Christ…