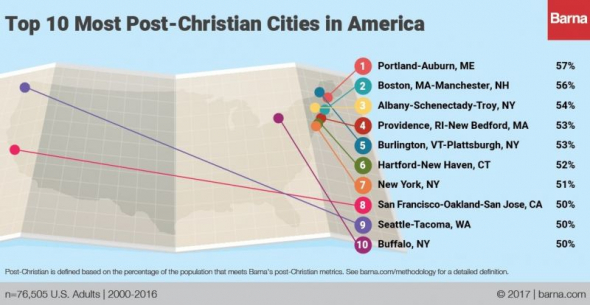 America is still a predominantly Christian nation, but it’s becoming both less Christian and less religious, according to the results of the new American Religious Identification Survey. According to the poll, which came out today, the percentage of Americans who define themselves as Christian has dropped from 86 percent in 1990 to 76 percent in 2008. In one of the most dramatic shifts, 15 percent of Americans now say they have no religion — a figure that’s almost doubled in 18 years. Americans with no religious preference are now larger than all other major religious groups except Catholics and Baptists.

“What seems to be happening is there is a decline in what we might call traditional brand loyalty to the old denominations, specific churches,” said Barry Kosmin, a principle investigator for the American Religious Identification Survey. In the last 18 years, despite population growth and immigration, almost all religious denominations have lost ground. Mainline Protestants are down the most. Methodists, for example, have gone from 8 to 5 percent. Baptists are down from 19.3 to 15.8. And Jews are down from 1.8 to 1.2 percent.

Meanwhile, the number of atheists, while still small, has nearly doubled from 900,000 to 1.6 million. Kosmin says that people may feel more comfortable admitting their lack of faith at a time when atheist books, like Christopher Hitchens’ “God Is Not Great: How Religion Poisons Everything” and movies are getting a lot of attention. Comedian Bill Maher took aim at religion in his documentary film “Religulous,” saying that he preaches “the gospel of ‘I Don’t Know.'”

But researchers point out that just because people are dropping out of organized religion, that doesn’t mean they’re abandoning faith. In an informal poll on Twitter today, we heard similar sentiments.

“I no longer attend church, but still pray to Jesus,” said Sean Whitney.

“I dropped out of the Catholic faith years ago. However, it doesn’t mean I have stopped believing in God,” said Carmen Rivera.

The study finds that more people are exploring spiritual frontiers. Some 2.8 million Americans now say they identify with new religious movements like Wicca, paganism or spiritualists. Catholic strongholds in New England and the Midwest have faded as people have moved toward the Sunbelt.

“We are becoming a nation of spiritually anchored people who are not traditionally religious,” said Serene Jones, president of the Union Theological Seminary in the City of New York.

While Americans may be leaving established denominations, the one major growth area in American Christianity is among evangelicals. Megachurches are booming, rising from 5 to 11.8 percent of the population.

And with the economy in free fall, many megachurches say they’re seeing increased attendance. They’re praying that perhaps hard times will draw Americans back to their faith.