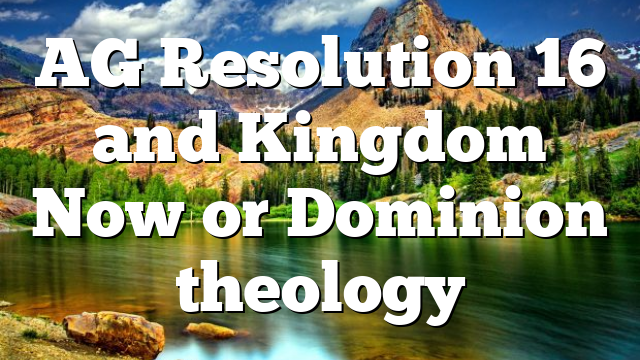 ENDTIME REVIVAL — SPIRIT-LED AND SPIRIT-CONTROLLED
(ADOPTED BY THE GENERAL PRESBYTERY IN SESSION ON AUGUST 11, 2000.)
As the writer of Ecclesiastes noted, there is nothing new under the sun (Ecclesiastes 1:9). Generations come and go. Revival movements come and go. Hunger for more of God comes and unfortunately wanes. Some people prefer the routine over the unexpected. Others desperately want to see something unusual, something that has never happened before.

We affirm that there are, and ought to be, apostolic- and prophetic-type ministries in the Church, without individuals being identified as filling such an office.
Kingdom Now or Dominion theology. The thought that God’s kingdom can come on earth with a little help from humankind is intriguing to those who advocate this approach to impacting society. Rather than scoffing at the promise of Christ’s imminent return (2 Peter 3:3,4), this errant theology says that Jesus will not return until the Church takes dominion of the earth back from Satan and his followers. By taking control, through whatever means possible, of political, ecclesiastical, educational, economic, and other structures, Christians supposedly can make the world a worthy place for Christ to return and rule over. [6] This unscriptural triumphalism generates other related variant teachings.
Manifest Sons of God and Joel’s Army. These are some of the names used to describe those who have caught the vision of the Kingdom Now and are actively at work seeking to overcome the opposition and declaring Christians who hold a biblical understanding of Christ’s imminent return at any time to be cowardly for not joining the “anointed,” as they sometimes call themselves. Without question, the Old Testament Book of Joel includes many endtime references. But the great and powerful army in Joel 2 is one of terrible locusts, an instrument of judgment on Israel. After Israel’s repentance, the army of locusts is destroyed by the Lord. Only after this destruction of the instrument of judgment does the promised revival come. “And afterward, I will pour out my Spirit on all people” (Joel 2:28). It is a complete misinterpretation of Scripture to find in Joel’s army of locusts a militant, victorious force attacking society and a non-cooperating Church to prepare the earth for Christ’s millennial reign.

Matthew Schmitz, “Immigration Idealism: A Case for Christian Realism” First Things (May 2019). As usual, the writing of Matthew Schmitz, senior editor of First Things, is clear and cogent—and courageous. He fearlessly tackles daunting topics such as, in this case, immigration. It is a genuine pleasure to follow his almost seamless integration of personal testimony, […]