– WHAT CHRISTIANS THINK ABOUT TRUMP? http://www.pentecostaltheology.com/what-christians-think-about-trump/

2. A 2ND PROPHETIC DREAM ABOUT TRUMP: FROM TRUMP TO TRIUMPH http://www.pentecostaltheology.com/a-2nd-prophetic-dream-about-trump-from-trump-to-triumph/

3. Vehement protests against Donald Trump are the work of the enemy https://www.facebook.com/groups/thelogy/permalink/978481735540175/

4. PRESIDENT NIXON WITH 1987 PROPHETIC LETTER: TRUMP WILL BE PRESIDENT http://www.pentecostaltheology.com/president-nixon-with-1987-prophetic-letter-trump-will-be-president/ 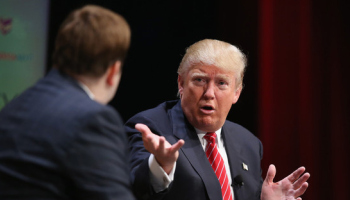 Troy Day [03/16/2016 11:52 AM]
What would it mean for her and all other Christians who prayed and prophesied for Trump’s presidency when Hillary wins? https://www.youtube.com/watch?v=_Kh1gJAc13U

Vernon Soles [03/16/2016 11:58 AM]
I’m a Christian and I’m voting for trump. I’ve had enough lies from those who claim to be evangelical. You can list a list from here to yonder. We want someone who’s going to be for this country and not continue the policy’s of the establishment.

Vernon Soles [03/16/2016 12:19 PM]
I would like for you to check out many of the presidents that we have had. Some were cussers , they drink, they were hotheaded but they were good presidents. I know that isn’t what we want to hear but it’s happened. I rather vote for a man that puts it on the line and does what he said he would do than waste a vote for hypocrisy.

Ricky Grimsley [03/16/2016 12:44 PM]
Define “good presidents”. Guys who kept people docile and working while expanding the nwo or a “military industrial complex”. America has been actively using muslim extremism to destabilize the middle east since the fifties. Our government has ran organized crime and shipped in the drugs for decades. The CIA runs the drug trade and uses that money to fund radical islam along with turkey and saudi arabia. Those plans are decades old. We changed administrations but the government got bigger every year since fdr.

John Kissinger [03/16/2016 3:07 PM]
How many millions have you contributed to Trump spreading him on social media? http://news.yahoo.com/donald-trump-hillary-clinton-social-media-twitter-facebook-linkedin-exposure-value-181904771.html;_ylt=AwrC1CmlrulWa00A0UjQtDMD;_ylu=X3oDMTByOHZyb21tBGNvbG8DYmYxBHBvcwMxBHZ0aWQDBHNlYwNzcg–

Jeffrey Madison [03/17/2016 7:58 AM]
Lol!!! Man, opinions are like mornings breath, we all have it, but don’t realize it until someone points it out; and boy does this opinion stink, lol. Come on people, let’s start living in reality.

Troy Day [03/17/2016 7:59 AM]
Jeffrey Madison Just wait for the morning news to come in… Right after reading this post, one Lee Grady of CharMag too decided to jump on the Trump train http://www.charismamag.com/blogs/fire-in-my-bones/25884-the-president-of-the-united-states-shouldn-t-be-sexist

Jan Dixon Sykes [03/17/2016 8:42 AM]
Trump’s statements about women don’t offend me. Rosie is fat and Carly’s face is ugly. They are public figures. So all comments are fair game. Just like his combover and Christie’s weight.

Jeffrey Madison [03/17/2016 8:48 AM]
Troy, I frankly don’t care what happens, he’s got my full support. I know more about #Trump than ten Michael Browns. You all could say that he’s the Antichrist, he could grow horns and a tail, and i still wouldn’t care about what you folks have to say! The fact is, prophet word or not, no one knows what is going to happen, this is why we have to vote. With that, yes, I’ve had prophet dreams that have pointed out Trump’s political invincibility, but this isn’t why I’m supporting him. I’m supporting him because he wants to end NAFTA and bring our jobs back home, he wants to keep America safe by building a “huge” wall on the southern boarder, and he see Muslims as they are; furthermore, Trump will work with Republicans and Democrats to get the job done. Lastly, in reality, no one but Trump can beat Hillary. This is because he’s the only who has more brand recognition than her. Also, unlike the other candidates, Trump will not hold back on blasting Hillary for her and Bill’s past. Unlike the past, Hillary won’t be able to play the victim, or the faithfully wife; the blood of those who died in Benghazi will make sure of that!

Troy Day [03/17/2016 9:46 AM]
Care or no Trump just hit a critical threshold for the GOP nomination — one that his opponents might not https://www.washingtonpost.com/news/the-fix/wp/2016/03/15/donald-trump-just-hit-a-critical-threshold-for-the-gop-nomination-one-that-his-opponents-might-not/?wpisrc=nl_az_most

Troy Day [03/17/2016 11:45 AM]
David Lewayne Porter If you’ve noticed Hillary already has 1,600+ delegates. Trump dont have half of that. We are yet to see the liberal voters in this country coming together behind her in #California and other states https://www.google.com/webhp?sourceid=chrome-instant&ion=1&espv=2&ie=UTF-8#q=trump+clinton+delegates&eob=m.09c7w0/R/3/short/m.09c7w0/

Carl Murphy [03/17/2016 11:49 AM]
Hillary needs over two thousand, she has only about 1100 actual elected delegates, so she has in theory about the same percentage as Trump but because the democrats don’t believe in democracy she has all those unelected super delegates. If republicans had super delegates Jeb Bush would be leading.

As established by the Bishops, the Clergy, and the Laity of the Protestant Episcopal Church in the United States of America, in Convention, on…