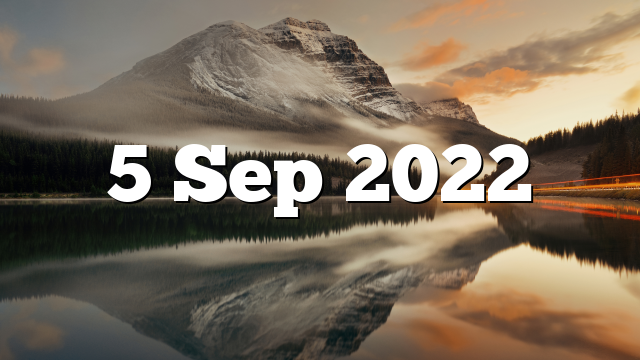 More than 39 million under excessive heat warnings as scorching heat wave expands
An extreme heat wave that has been ongoing for days across much of the West will show no signs of fading over the Labor Day weekend. In fact, while some in the Northwest may encounter a reprieve from the heat, others will see the mercury rise even more over the coming days as the intense heat spreads eastward.

Tropical Storm Earl Expected to Become a Hurricane; Danielle Spins in the North Atlantic
Tropical Storm Earl will curl northward in the western Atlantic after forming a day after Danielle broke a nearly two-month gap in tropical activity. Earl and Danielle will likely remain far from land.

California Assembly Passes Bill to Lure ‘Transgender’ Kids for Treatment
On Monday, the lower house of the California State Legislature passed a bill that would incentivize out-of-state children to come to the state to receive life-altering “gender transition” treatment if their home states have banned such procedures.

Polio case stirs fear in New York, accelerates vaccine push in Jewish community
When Brittany Strickland heard that the United States recorded its first polio case in almost a decade, she was “deathly scared” — the 33-year-old wasn’t vaccinated against the disabling disease.

Saudis Use Orwellian App to Identify Dissidents, Imprisoning Some for Decades
Saudi Arabians are using a mobile app sold by both Apple and Google to snitch on their fellow citizens for dissenting against government authorities. As a result, activists and others are going to prison for more than 30 years in some cases, Business Insider reported on Friday.

German consumer confidence hits record low as energy bill fears soar
Germans are feeling more frugal than at any point in the last decade, according to a survey by GfK. It found that consumers are putting aside any spare cash in anticipation of much higher energy bills.

IRS Admits That A Billion Dollars In Stimulus Cash Went To Prison Inmates
A lot of mistakes were made during the pandemic, but this one deserves some kind of award. Some of the prisoners who receieved this money are serving life sentences.

Legal Challenges Begin in India: Bombay High Court Issues Notice to Indian Government, Bill Gates and Others in Connection to Vaccine Death
The Bombay High Court recently sent a notice to the Indian government (Maharashtra and Union government), the Serum Institute of India (SII), and Bill Gates because of a petition from a father who said the COVID-19 vaccine killed his daughter, the Hindustan Times reported.

Universities clinging to vaccine mandates may face heavy liability
Amid growing doubts about COVID-19 vaccine safety and efficacy, the CDC’s abandonment of distinctions between the vaccinated and unvaccinated, and a costly university healthcare system settlement with workers denied religious vaccine exemptions, universities that retain vaccine mandates may find themselves facing heavy liability.

“Worse Than Couple Years Ago:” Food Bank Demand Spikes As Inflation Wrecks Households
The last time we showed readers the North Texas Food Bank (NTFB) was nearly two years ago, during the early days of the virus pandemic, when thousands of hungry and unemployed lined up in their vehicles to receive care packages. Now demand for food banks is surging, but for different reasons, as household finances are crushed by inflation and can barely afford essential items at supermarkets.

Taiwan shoots down drone off Chinese coast for first time
Taiwan’s military has shot down for the first time an unidentified civilian drone that entered its airspace near an islet off the Chinese coast, after the government vowed to take tough measures to deal with an increase in such intrusions.

The Names of The Bilderbergers Who’ve Played a Role in The Covid Event
“Over 150 Bilderbergers (of the 1861 who are still alive) have played important parts in the Covid-19 event. Many, perhaps most, of the below have been active in various roles; this page attempts to list them under the most important played.” – Wikispooks

EXCLUSIVE – Official Documents confirm real reason Moderna is suing Pfizer: Moderna created & patented COVID Virus in 2013 following Gain of Function Research which allowed Moderna to develop COVID Vaccine before World knew COVID-19 existed
Your Government has given companies like Pfizer and Moderna immunity from liability if you are injured by their Covid-19 vaccines. With this law, they cannot be taken to court for damages. So if you are one of the many who have been injured, or lost a loved one due to Covid-19 vaccination, then you may feel frustrated that Moderna is now suing Pfizer for alleged patent infringement over mRNA Covid-19 injections.

Funeral Director Sounds Alarms: ‘Deaths have Increased by 50% in the Past Six Months’
Funeral director Nicholas Lee questions the accuracy of many death certificates and whether doctors know the actual cause, thus making it impossible to list correctly.

As Europe Implodes, It Plans “Radical Intervention” Including Price-Setting, Suspending Derivatives Markets And Europe-Wide Margin Call Bailouts
Just when you thought it couldn’t get any more idiotic, Europe will propose i)  capping the price of gas; ii) putting a price ceiling on gas imported from Russia; iii) price setting on the electricity market; iv) an urgent Europe-wide credit line support for market participants faced with very high margin calls.

Stand Strong – A Prophetic Word from 1985