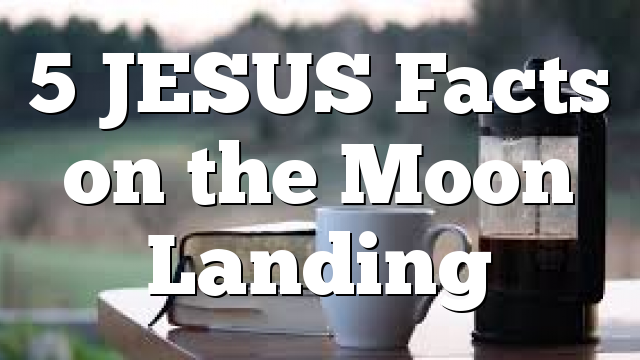 When Aldrin first floated the idea of celebrating Communion during the Apollo 11 mission to the moon, NASA administrators responded with skepticism. The agency had already fended off a lawsuit filed after astronauts broadcast themselves reading from the Book of Genesis during the Apollo 8 mission, which atheist activist Madalyn Murray O’Hair derided as a violation of the separation of church and state. (Her case was ultimately dismissed.)

2. The “church of the astronauts” still celebrates Lunar Communion Sunday.

Webster Presbyterian Church still celebrates Lunar Communion Sunday every year on the Sunday closest to the July 20 anniversary of the moon landing. According to the Presbyterian Church (USA) Office of the General Assembly, Webster Presbyterian has been called the “church of the astronauts.” It’s been the spiritual home of many astronauts and employees from the nearby Johnson Space Center, including John Glenn, one of NASA’s original Mercury Seven astronauts and the first American to orbit the Earth, and Jack Kinzler, who engineered the American flag Aldrin and Armstrong planted on the moon so it would wave in space.

3. The pope blessed the Apollo 11 astronauts.

Like millions of people around the world, the pope at the time, St. Paul VI, watched the moon landing on television. The pope, however, had a special vantage point. He watched it at the Vatican Observatory, even peering through its primary telescope to view the moon where the astronauts stood, imperceptible even to the powerful instrument, according to the Vatican Observatory Foundation website.

4. There was an Apollo Prayer League.

Although Aldrin kept his Communion on the moon quiet for years, he had spiritual backup. When O’Hair filed her lawsuit alleging Apollo 8 astronauts violated the U.S. Constitution’s establishment clause by reading from the Book of Genesis while in orbit, a group that called itself the Apollo Prayer League leapt to the astronauts’ defense. The League eventually accrued more than 8 million signatures and letters championing the religious freedom of astronauts, according to Wired. The group was formed years earlier by NASA’s then-chaplain, a scientist and Presbyterian minister named John Maxwell Stout, and his wife, Helen, in the wake of the Apollo 1 fire that killed three astronauts. The final wishes of one of the felled astronauts, Ed White II, included putting a Bible on the moon, a mission Stout took up in his honor.

5. The Bible got to the moon (eventually).

Aldrin brought a scrap of Scripture with him to the lunar surface, likely because a full printed copy of the holy book did not fit within NASA’s stringent weight requirements. So the Apollo Prayer League, determined to land a Bible on the moon, created microfilm versions of the Bible. Even so, landing one on Earth’s natural satellite proved tricky. The first two attempts failed: Apollo 12 astronauts mistakenly stowed a single microfilm Bible in the orbiter instead of the lander, and while Apollo 13 also carried microfilm Bibles aboard (reportedly presented to the astronauts by then-U.S. Rep. George H.W. Bush), that mission famously never landed on the moon due to a mechanical malfunction.

The Berean Lamp Memory Verse for this week is: “For…

The Berean Lamp Memory Verse for this week is: “They have turned their back to Me and not their face; though I taught them,…