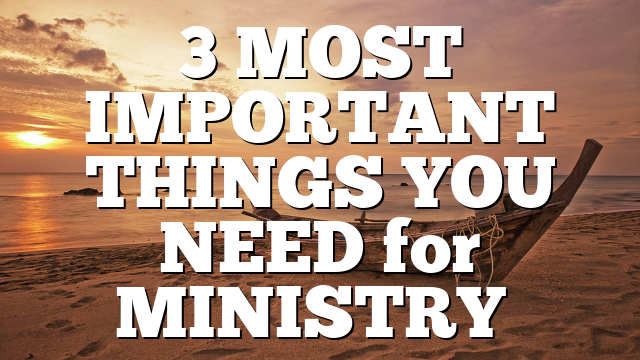 THREE MOST IMPORTANT THINGS YOU NEED TO BEGIN A MINISTRY (PART 2):

I have shown you so far that the first most important thing you need to begin your ministry, and by extension your calling, is a STAFF. I know you may be asking what I mean by “STAFF”, I intensionally did not provide that answer because it is a subject that does not need haphazard answer. There are times half knowledge of a subject is worse than complete lack of knowledge of it! So I am leaving the discussion of what a “STAFF” symbolizes as a topic on its own. But suffice to say here: when you want to know what a “STAFF” symbolizes, think of every single thing Moses did with His “STAFF” or the staff of Aaron, his brother in Egypt and the wilderness. Those are examples of what a “STAFF” symbolizes.

What is the second most important thing you need to begin your ministry and calling? The answer is “GARMENT”.

The Bible says about the death of Aaron:

Aaron was so strong he could still climb Mount Hor. Why then did he DIE simply because his GARMENTS were removed from his body? When it was time for Aaron to DIE according to the word of the LORD, God did not ask him to be thrust with a sword. He did not allow Aaron to be afflicted with a sickness that will kill. He simply asked Moses to take Aaron to Mount Hor and remove his GARMENTS.

What then was so special about Aaron’s GARMENTS that he DIED immediately they were removed from his body?

While sending out His twelve disciples on evangelical mission, the Bible says about Jesus:

“He commanded them to take nothing for the journey except a STAFF – no bag, no bread, no copper in their money belts – but to wear sandals and not to put on two TUNICS.” (Mark 6:8-9).

Just as Aaron’s GARMENTS, when Jesus commanded his disciples to wear a GARMENT or TUNIC in addition to their STAFF, it was a symbol of the second most important thing you need to begin your MINISTRY. What symbol is this?

I have seen many Christian MINISTERS bartered through spiritual attacks in the course of their MINISTRY. Others have died as a result of the same spiritual attacks.
I have seen ministers who went blind due to spiritual attacks in the course of ministry. I have seen others who were paralyzed. People have had to ask me why this had to be. The answer is in your understanding why Aaron had to DIE on Mount Hor immediately his MINISTRY GARMENTS were removed from him. The answer also lies in your understanding why the second thing Jesus commanded His twelve disciples to take along with them during their MINISTRY journey was a GARMENT and why the GARMENT symbolizes the second most important thing you need to begin your MINISTRY or CALLING.

After the fall of man in the Garden of Eden, the LORD said to the Serpent:

The seed of the woman spoken of above refers to Jesus Christ. But every genuine Spirit-filled believer is also the “seed (offspring) of the woman” (Revelation 12:12)

While many preachers often limit the application of this scripture in Genesis 3:15 to Jesus alone, however, when Jesus said to His disciples:

“Behold, I give you the authority to TRAMPLE (BRUISE the HEAD of) on SERPENTS and scorpions….” (Luke 10:19);

He was not only quoting from the scripture in Genesis 3:15, where the LORD told the SERPENT that the “SEED” of the woman shall BRUISE (CRUSH, TRAMPLE UPON) his HEAD, He equally meant that this scripture promise was not limited to Jesus as many teach but also apply to Jesus’ disciples.

Bearing this in mind that the disciples of Jesus have been given power to CRUSH and BRUISE the HEAD of (to TRAMPLE UPON) the SERPENT, however NOTE that the same original Scripture in Genesis 3:15 that gave the SEED of the WOMAN the POWER and AUTHORITY to BRUISE and CRUSH the HEAD of the SERPENT and TRAMPLE on SERPENTS and SCORPIONS also gave the SERPENT the power or authority to “BRUISE” the “HEEL” of the “SEED” of the WOMAN.

What does this mean?

When you CRUSH or BRUISE the HEAD of someone, it could lead to CASUALTY or MORTALITY but not when you BRUISE the HEEL of someone.
We the disciples of Jesus have been given POWER and AUTHORITY to ANNIHILATE or COMPLETELY DESTROY the WORKS of Satan, his demons and their agents but Satan and his cohorts have only been given POWER to cause MINOR ATTACKS on the disciples of Jesus but not MORTAL ATTACKS that lead to CASUALTIES nor SPIRITUAL ATTACKS that lead to GREAT DAMAGES.

“…For this purpose the Son of God was manifested, that He may DESTROY the WORKS of the DEVIL.” (1 John 3:8)

In the course of his ministry, over and again, Paul the Apostle talked of being “HINDERED” by “SATAN”:

“Therefore we wanted to come to you – even I, Paul, time and again – but SATAN HINDERED US.” (1 Thessalonians 2:18; see also Romans 1:13; 15:22) – DEMONIC HINDRANCES and DELAYS, unknown to many, are examples of spiritual attacks!

In another of his Epistle, Paul said:

“And lest I should be exalted above measure by the abundance of the revelation, a THORN in the FLESH was given me, a MESSENGER of SATAN to buffet me…” (2 Corinthians 12:7)

All these that happened to Paul the Apostle are examples of the the “SERPENT” “BRUISING” the “HEEL” of the “SEED” of the woman. They are MINOR SPIRITUAL ATTACKS from Satan and his cohorts on the disciples of Jesus that do not lead to CASUALTIES or GREAT DAMAGE.

Do you now understand why I said above that SPIRITUAL ATTACKS on Christian MINISTERS are INEVITABLE but it is the DEGREE and MAGNITUDE that are PREVENTABLE?

Such Spiritual attacks by Satan, his demons and their agents, however, are for good purposes. This is why the Lord permits them but limits them to MINOR ENDURABLE ATTACKS. They are meant to keep every believer on the WATCH: They are meant to cause us as disciples of Jesus to be AWARE of the PRESENCE of DEMONS, the ACTIVITIES of DEMONS and to WATCH and PRAY as a result (Luke 21:36; Matthew 24:42)

For example, as a new convert to Christianity, I faced a severe DEMONIC ATTACK that almost caused me to go back into the world – that was the thought that filled my mind as I faced the demonic attack. Each time I slept then as a new convert, once I closed my eyes to sleep, I had dreams of SERPENTS being everywhere around me! In addition, I often saw MAD people PURSUING me and FLOGGING me with a BROOM! I DREADED the NIGHT when it was time to sleep as a result of these DEMONIC ATTACKS.
These attacks, however, caused me to go into INTENSE PRAYERS and FASTING, STUDY of the word of God and fellowship with the brethren.
As a result of the INTENSE PRAYER and FASTING, I began to receive VISIONS and REVELATIONAL ENCOUNTERS from the Lord! At this point, I was only a BELIEVER. I was not yet BAPTIZED in the Holy Spirit.

If you are facing DEMONIC ATTACKS or SPIRITUAL ATTACKS, LEARN form my own experience. NEVER GIVE UP! Those attacks are not meant to destroy you. They are meant to build you up as it built me up. They are meant to cause you to be aware of the presence of demons and their agents and their activities. They are meant to grant you access to Divine visions, revelations and encounters as my own demonic attacks did for me.
But know this for sure: As a believer in Christ Jesus, while the Lord Jesus has given you power to annihilate the works of Satan and his demons in your life, your family and others, He has not given Satan and his demons the power to destroy you or cause great damage to you as I showed above but to “bruise” your “heel” through minor bearable attacks..

If the Lord Jesus has not given Satan, his demons and their agents the power to DESTROY or cause GREAT DAMAGE through SPIRITUAL ATTACKS to any genuine believer in Jesus Christ, while are many, especially Christian ministers, becoming CASUALTIES of demonic and spiritual attacks?

The grace, mercy and peace of the Lord Jesus Christ be with you!

FacebookTwitterSubscribe
Subscribe to receive all news to your email or phone: [wysija_form id="1"]
forimportantministrymostneedTHINGSYou

by William M. Arnett   Source: Wesleyan Theological Journal Wesley Center Online Wesley.nnu.edu   The person and work of the Holy Spirit have a…