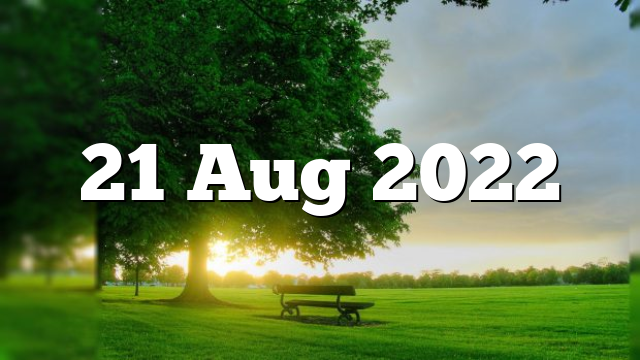 Nuke talks: Iran drops demand that IRGC be removed from US terrorism list
A senior Biden administration official cited by the news outlet revealed that Iran’s response earlier this week to a draft nuclear agreement proposed by the E.U. made no mention of Tehran’s previously firm position on the IRGC. “The current version of the text, and what they are demanding, drops it,” the official was quoted as saying. “So if we are closer to a deal, that’s why.”

NYC’s 9/11 Tribute Museum to close, per report
The 9/11 Tribute Museum will shut down after Wednesday, just weeks away from the 21st anniversary of the 9/11 terror attacks. The museum, which opened in 2006, was founded by a group of victims’ relatives. Volunteers who had lost a family member or were connected in some way to the terrorist attacks led tours at the museum. It has struggled to stay open since the COVID-19 pandemic, according to the museum’s CEO.

Fargo School Board Reinstates Pledge Of Allegiance After National Public Outcry
After criticism from conservative lawmakers and backlash from citizens nationwide, the Fargo Board of Education on Aug. 18 voted to reverse course on its previous week’s decision to stop reciting the Pledge of Allegiance before its meetings. North Dakota’s Republican Party called the board’s Aug. 9 vote “laughable” and an “affront to our American values.”

Daughter Of Putin Ally Reportedly Killed In Car Bombing Outside Moscow
The daughter of Alexander Dugin – a close ally and adviser to Russian President Vladimir Putin – has reportedly been killed in what many are assuming was an assassination attempt meant for her father. Darya Dugin was ‘blown to pieces’ near Moscow suburb of Bolshiye Vyazyomy, according to reports, which say that Alexander had originally planned to travel back with her from a festival before deciding to ride in a separate car,

USDA Backs Down, ‘Clarifying’ That Religious Schools Are Exempt From Transgender-Inclusivity Mandate
The United States Department of Agriculture (USDA) is backtracking its mandate, published in May, that required all schools who receive federal funding to comply with a broadened definition of discrimination, which encompassed sexuality and “gender identity.”

The scariest weapon: Bacteria and viruses as munitions
A biological weapon is defined as a weapon that makes use of pathogens – mainly bacteria and viruses – or toxins, which are toxic substances produced by microorganisms. The goal can be killing enemy soldiers and civilians, causing a disease that will neutralize them, or to create panic. … unlike chemical weapons, nuclear weapons or any conventional weapons, the effects of a biological weapon can spread and can potentially be dangerous even in places distant from the attack area, through the spread of the disease.

Glacial archaeologists find arrow in melting ice
Glacial archeologists in Norway found their first arrow of the season, which is approximately 1500 years old, according to the Glacier Archeology Program of the Innlandet County Municipality. The archeological site, mountainous Oppland in southeastern Norway, generally yields four types of artifacts according to their website: arrows, bows, spears and scaring sticks.

Israel urges US to reject nuclear deal as Tehran signals willingness to sign
National Security Adviser Eyal Hulata is expected to head to Washington this week as Israel attempts to sway the United States to walk away from the Iran deal just as Tehran hinted it may be willing to finalize the agreement. Prime Minister Yair Lapid spoke against the deal on Thursday with German Chancellor Olaf Scholz, US Ambassador to Israel Tom Nides and chairman of the Congressional Subcommittee on the Middle East, Rep. Ted Deutch (D-Florida).

State attorney general refuses to defend state law
Officials with the Thomas More Law Society have filed a motion to intervene on behalf of Traverse County’s county attorney, Matthew Franzese, in an argument over an abortion law. It’s because Minnesota Attorney General Keith Ellison, who supports radical abortion policies, is refusing to “do the job” he’s appointed to do. “Ellison, a known supporter of abortion, has allowed an abortionist, and another abortion worker – both of whom have who have concealed their identity – along with an abortion advocacy group and transgender proponents, to attempt to strip away Minnesota’s protective oversight and eliminate any regulation of abortion. “This is something that the Minnesota constitution prohibits them from doing.

Court orders 2 judges who took millions in kickbacks to pay out big
A court has ordered two disgraced judges – convicted and jailed for taking kickbacks for sending kids to a certain private jail – to pay some $200 million to their victims. In what became known as a “kids-for-cash” scandal, they “shut down a county-run juvenile detention center and accepted $2.8 million in illegal payments from the building and co-owner of two for-profit lockups,” The two defendants also were cited by the judge for their “breathtaking arrogance and an unfathomable disregard of due process.”

Former Mayo researcher in US on H-1B visa pleads guilty to terrorism charge
A Pakistani doctor formerly employed by the Mayo Clinic in Rochester as a research coordinator has pleaded guilty to attempting to provide material support to a designated foreign terrorist organization, namely ISIS. Muhammad Masood, 30, a licensed medical doctor in Pakistan, was formerly employed at the clinic in Rochester, Minn., under an H-1B Visa.