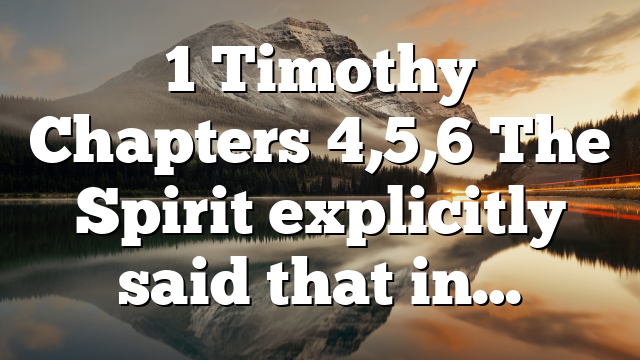 1 Timothy Chapters 4,5,6
The Spirit explicitly said that in the latter times some will depart from the faith, giving heed to deceiving spirits and doctrines of demons, speaking lies in hypocrisy, having their own conscience seared with hot iron. They forbid marriage and commanding to abstain from foods which God created to be received with thanksgiving by those who believe and know the truth. Thank God for your foods before eating; they are sanctified by the word of God and prayer. Exercise yourself toward godliness. Continue to take heed to yourself and to the doctrine and in doing so, you will save yourself and your hearers. Don’t rebuke an older man, but exhort him as a father, younger men as brothers, older women as mothers, younger women as sisters. If anyone does not provide for those of his household, he has denied the faith and is worse than an unbeliever. Let the young widow get married to keep them from mischief. Bondservants, honour your masters. Avoid the proud who major in disputes and arguments over words, full of envy and useless wranglings. Now godliness with contentment is a great gain. Those who want to get rich fall into temptation and into harmful lusts which drown men in destruction and perdition. For the love of money is a root of all kinds of evil, for which some have strayed from the faith into sorrows. But you, flee these things and pursue righteousness, godliness, faith, love, patience, gentleness and fight the good fight of faith and grace to you, in Jesus name. AMEN! AMEN!

Mark 2:17 KJV — When Jesus heard it, he saith unto them, They that are whole have no need of the physician, but they…