Donald Trump: ‘Nobody Reads the Bible More Than Me’

Trump previously said that the Bible was his favorite book, but refused to cite a favorite verse of Scripture. Later, he said that his favorite Bible verse was “never bend to envy,” which is not in the Bible.

While speaking at Liberty University, Trump referred to the book of Second Corinthians as “Two Corinthians,”

Trump said that his campaign won with all demographics, including evangelicals. “I love evangelicals,” he said. Kirsten Powers however wrote that Trump is the Evangelical Scam Artist

Nevertheless, Sarah Palin endorsed Trump for President and so did Willie Robertson who recently aligned with the Trump Dynasty. In response, presidential candidate Carson asked for Prayer for his rival, Donald Trump 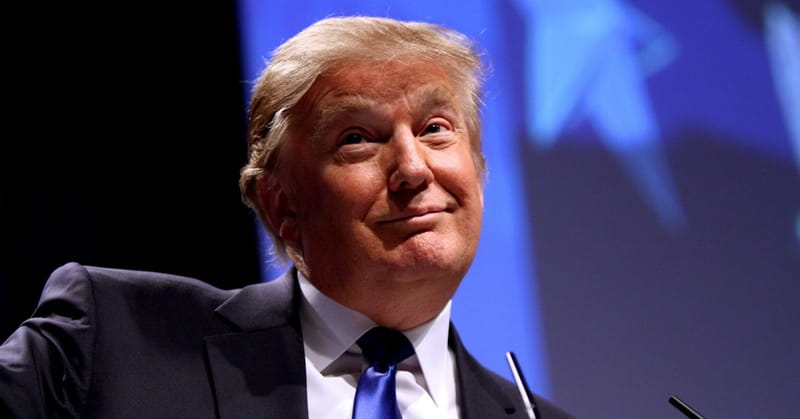 Troy Day [02/29/2016 8:16 AM]
I for one read the Bible more than #TRUMP and so do millions of American Evangelicals. However, the implosion over Donald Trump’s candidacy that Republicans had hoped to avoid arrived so virulently this weekend that many party leaders vowed never to back the billionaire and openly questioned whether the GOP could come together this election year. At a moment when Republicans had hoped to begin taking on Hillary Clinton — who is seemingly on her way to wrapping up the Democratic nomination — the GOP has instead become consumed by a crisis over its identity and core values at the dawn of #SuperTuesday https://www.washingtonpost.com/politics/divisions-within-gop-over-trumps-candidacy-are-growing/2016/02/28/97b16010-de3a-11e5-8d98-4b3d9215ade1_story.html?wpisrc=nl_az_most

Stan Wayne [02/29/2016 8:18 AM]
It is very interesting. Actually many have wished the Republican Party would crash because it seems Byzantine.

Troy Day [02/29/2016 8:21 AM]
Something important evangelical republicans must consider David Lewayne Porter Is Donald Trump Really Pro-Life? There seems to be a major Problem with Trump’s change of heart on #ABORTION In 1999 Trump claimed to be “pro-choice in every respect”, to the point he would have opposed a ban on late-term and partial-birth abortions. A mere 14% Americans believe third-trimester abortions should be legal. Trump has since switched sides, a move that makes sense in today’s political climate. Will you still vote Trump? David M. Hinsen http://www.christianheadlines.com/columnists/guest-commentary/the-problem-with-trump-s-change-of-heart-on-abortion.html

Stan Wayne [02/29/2016 8:28 AM]
He says he recently had a personal experience with a friend that turned him against abortion. But basically people who don’t want Trump or who cannot see a historic opportunity will never be satisfied.

Brian Roden [02/29/2016 9:24 AM]
The “Two Corinthians” issue is a non-issue. Brits and Aussies say it that way, as do many American Bible scholars who did their advanced studies in Britain. It could be that’s the way the preacher Trump hears the most says it.

But on the other stuff, yeah, even though he’s not a career politician, he’s being a politician in that he’s just saying what he thinks people want to hear and what he thinks can get him elected.

Darla Warren Poynter [03/01/2016 6:22 AM]
I’m reminded of Saul (in the bible) because he had Gods people killed then he became converted and then he’s got people on both Christians and non Christians that didn’t trust him. Its still the same today.

Troy Day [03/01/2016 6:28 AM]
That would have been true if he was running for president in the UK or Australia wanting to make them great again. Since this is America, we say second Corinthians around here.

David Lewayne Porter [03/01/2016 6:30 AM]
Paul through his new life lived down his testimony of his life as Saul. Mr donald is still showing signs of the old self and not living down his past. I do not believe him. I can’t take him seriously.

Troy Day [03/01/2016 6:31 AM]
David Lewayne Porter Then you’re left with Clinton. Even Cruz is afraid that if Trump is nominated Clinton wins. Cruz must know Trump will be nominated Jon Sellers Billy Monroe Poff https://www.facebook.com/tedcruzpage/videos/10153925497457464/

Troy Day [03/01/2016 6:57 AM]
Its old news and Cruz delt with that. I understood your post to be about a new no one but Cruz campaign in light of the video posted. From the video seems like Cruz is fixing to withdraw if he dont win TX knowing Trump to be GOP’s candidate of choice

David Lewayne Porter [03/01/2016 7:20 AM]
In a post by Farwell Jr of Liberty University (he more or less admits) he is voting financially based. On the other hand Max Lucado gave a good discourse on why he (trump) does not line up as a Christian and how trump’s own words and trump’s very own actions contradict themselves (Thus contradicting himself).

David Lewayne Porter [03/01/2016 7:52 AM]
Ricky Grimsley That may be it. , but someone asked the other day, “why do we want to make deals with terrorist”? Is he willing to “deal” with everyone? Thought to ponder.

Stan Wayne [03/01/2016 9:12 AM]
I am sorry that Christians are so unhappy with Trump – it seems to me that only the sons of Issachar understand the times

John Ruffle [03/01/2016 9:20 AM]
Trump may be the last hope for USA. Clinton has said “we don’t need to make America great again, she always has been great!” [EWTN Nightly News, 29/2/16] which comment reveals how blind Hilary is – she’s not seen the writing on the wall. Regardless of what folks think of Trump, he’s seen the writing. But the only move forward is repentance, turning back to God and humility. That’s the role of Christian leadership -not the chief exec – but if laws continue to be passed for a quasi-equality that actually parades and heralds licenciousness, flagrant immorality and ungodliness then the nation is doomed.

David Lewayne Porter [03/01/2016 9:38 AM]
Stan Wayne Exactly, and I don’t believe they would back trump if they were here today. As a matter of fact they would most likely be directing the nation on all fronts, not just back (a particular) candidate.

Polling says the only one to beat hillary in a head to head contest is rubio. trump has not come out ahead in one pole that is a two way race between hillary and him.

(And I don’t back hillary).

David Lewayne Porter [03/01/2016 10:31 AM]
Cruz just said on a radio interview that there is a poll showing head to head he beats hillary, same poll shows rubio beating hillary.

FacebookTwitterSubscribe
Subscribe to receive all news to your email or phone: [wysija_form id="1"]
Bibledonaldreadstrump

Three Kings Day of the Magi

Epiphany 2016: ‘Three Kings Day’ It’s the day the Magi visited Jesus with gifts of gold, frankincense and myrrh. Were they really just 3?…