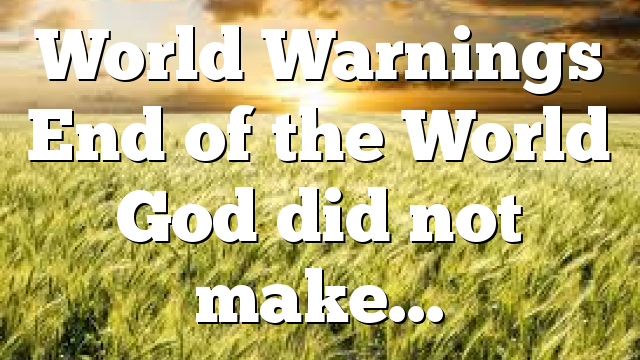 End of the World

God did not make this world the way it is.

He made a great world for us and gave humans a choice.

Sin made it like it is, and sin will be its demise.

The End of this world is going to take place in one of three distinct years between the years 2450 AD and 2700 AD.

The exact year of the three will only be clarified by comparing Bible prophecy to world events as they progress.

But at this time, the three distinct years are known and proven by Chapter and Verse of Bible prophecy.

For the full proof, read this webpage as an introduction; then read all the information at the link below.

Note: It is about a small book’s worth in total. If you take the time to read fully, you will be rewarded.

If you find this hard to believe or are unsure about proceeding, simply bookmark this page for now.

This world will not end by a world war, an asteroid, a virus, a natural disaster, a specific man-made disaster, or any of the other typical events people imagine.

And it’s not that some (or even all) of these things won’t occur between now and the time of the End, and be extremely devastating to life on the planet, even significantly reducing the Earth’s population by their cumulative effects.

It’s just that these types of events will not cease ALL human life on the planet.

No, this world will only end in one way – when Jesus returns to get His own, the Saved, away from it.

Between now and then, by man’s own choosing, the world will continue to get worse and worse in sin until there is finally no one else who will repent and come to God in Faith to be Saved.

“And as it was in the days of Noah, so it will be also in the days of the Son of Man: They ate, they drank, they married wives, they were given in marriage, until the day that Noah entered the ark, and the flood came and destroyed them all. Likewise as it was also in the days of Lot: They ate, they drank, they bought, they sold, they planted, they built; but on the day that Lot went out of Sodom it rained fire and brimstone from heaven and destroyed them all. Even so will it be in the day when the Son of Man is revealed.” – Jesus in Luke 17:26-30 (NKJV)

Thus, prior to Jesus’ Return, the world will again be as it was in the days of Noah. (And the days of Lot were similar.)

Yes, the people of the world in Noah’s day ate and drank and married, but their destruction was brought about by their spiritual condition that also reflected in the rest of their behavior, which is clearly defined in the Bible as the reason for the Flood: “Then the Lord saw that the wickedness of man was great in the earth, and that every intent of the thoughts of his heart was only evil continually.” – Genesis 6:5 (NKJV)

This present world might not have fully returned to that same spiritual condition yet, but anyone can see that as bad continues to outweigh and outpace the good almost everywhere around the Earth, this world gets closer by the day.

It’s not that sin didn’t exist throughout history; it did. But even amidst the sinful world, there was always a remnant of True Believers in God’s Word who were receptive to God’s Way in Spirit and in Truth, as shown by their changed lives. After all, True Believers repent of sin and no longer contribute to its increase in the world. (They are not like the many hypocrites who say “Lord, Lord” and continue to practice lawlessness.)

True Believers also share God’s Word of Love and Truth in a trustworthy manner with others, of whom a small number become New Believers, who mature into True Believers, thus continuing the cycle which, since the time of Noah, has always assured there are still some on the Earth who are willing to be Saved.

But the always-small stream of New Believers gradually reduces as the sin in the world increases.

Even so, since Noah, the sin of the world, while much, was not far-reaching enough to overwhelm the entire Earth where people lived and completely deplete the New Believer stream. And occasionally, small pockets of Revival even helped to replenish it. There was always at least some New Life somewhere in the world.

But starting a couple of centuries ago and continuing up through the present day, new technologies used in ways that have not been beneficial to human life have instead enabled such an overwhelming volume and degree of sin to persistently reach into almost every place on the Earth where people live that we are now past the point of no return.

Yes, there will be some New Believers here or there, in this place or that, until the End. But while they may be Saved, their number will not counteract sin’s inertia in this present world, or the overall trend of decline in the New Believer stream until it is completely gone.

(Again, we are talking about New Believers who become True Believers… those who give up willful sin by worshipping God in the Truth. They are few. We are not talking about the multitude of others who follow the existing “beast” church to perdition, along with its harlot daughter churches who never really left the mother harlot. She can be spotted by comparing her commandments-of-men to God’s Commandments, and noticing she has attempted to change the times and Law, specifically Commandments 2, 4, 9, and 10. (Not to be outdone by the mother, the harlot daughters mostly ignore God’s Commandments altogether.) The mother harlot can also be spotted by her many other adulteries if one is willing to get a Real Bible and actually read it, beginning with the Four Gospels of Jesus Christ – Matthew, Mark, Luke, and John – and comparing what Jesus says to what a church actually does, starting with the costumes their leaders wear, the titles with which they refer to themselves, and the fact that no man stands in God’s or Jesus’ place on the Earth. In this sinful and adulterous world, it is no exaggeration to say that the devil’s “false image” of Christianity is the extreme vast majority of it, while True Christianity – consisting of those who keep the Commandments of God and the Faith of Jesus Christ (Revelation 14:12) – is a tiny minority of it. It is not God’s Will that so few are His and so many “worship the beast”; it’s the choice of those who choose image over substance… the vast majority who find it easier to speak a lie than to live in the Truth.)

So, we are now past the tipping point, and it is just a matter of time until the End, which is prophesied.

But truly, what did we expect would happen as people, businesses, and nations have continually chosen to misuse rapidly increasing technologies in many sinful ways over many years and decades ? It isn’t what we do right that needs correcting, after all; it’s willfully ignoring what is wrong in sin that leads to destruction.

Has no one noticed the corresponding increase in selfishness, covetousness, and greed; in lies and deceit; in thefts and usury; in murders, violence, hatred, and disrespect; in gossip and slander; in self-righteousness, pride, and self-exaltation; in adulteries, lust, lewdness, and perversions; in the destruction of proper family structures; in blasphemies, the abuse of God’s Name, and abuse of God’s True Sabbath; in every form of immaturity and idolatry, including worship of money, people, culture, and self; and even in the very destruction of the Earth ?

Has no one noticed the corresponding increase in thanklessness to God for giving us our planet, our lives, our daily bread, our free will and power of choice to not only cease willful sin but to choose well instead, and to also be forgiven of our sins through Jesus Christ, His Son, whom He also gave to us ?

(And if we say we have noticed the many sins of the world, have we hypocritically noticed only in regard to “other people”; or have we ourselves, by Love for God and others, repented and turned from all such sin ?)

Again, what should the world expect as the Creator’s Will has been continually ignored, and even hated ?

It’s not too hard to know. We reap what we sow, and increasing amounts of it.

“For they have sown the wind, and they shall reap the whirlwind…” – Hosea 8:7

And as the good things continue to decrease around the Earth, the New Believer stream will also continue to dry up. Finally, when there are no more New Believers to be found, all there will be is selfishness and sin.

At that point, which is now in view and not too far away, it will be just “as in the days of Noah”.

And that is when Jesus will return to gather the True Believers, the Saved, who are still alive on the Earth at that time, along with the Saved who are asleep in the grave, to take them back with Him to Heaven; and the rest will be destroyed.

So yes, this world will end. But it won’t end according to speculation and guesses about this war or that disaster, as terrible as those things might be. It will end according to the Word of God that foretells it.

If you want to learn more about when this world will end according to Bible prophecy, there is a document that discusses this very matter – in full detail – located at this webpage: www.unhyp.com/the-end.html.

If you invest the time to read carefully the webpage and its two documents in order (about a small book’s worth in total), you will be rewarded. It is safe, reasonably simple, and shows full proof of exactly how Bible prophecy points to the only possible years of Christ’s Return. Without the proof, how could anyone have confidence in the result and its Truth ? Therefore, it takes some time to read. But once you know the End of this world, you will never be the same again.

— return to the top of this page by clicking here —

Please help this website do its job by sharing a link to it on other websites for people to see. Thank you for your consideration.

“NKJV” on this website refers to the “New King James Version” of the Bible, Copyright 1982 by Thomas Nelson, Inc. All rights reserved.

Is God’s foreknowledge of the future dynamic?

Is God’s foreknowledge of the future dynamic, not static like when the future of Nineveh was changed?