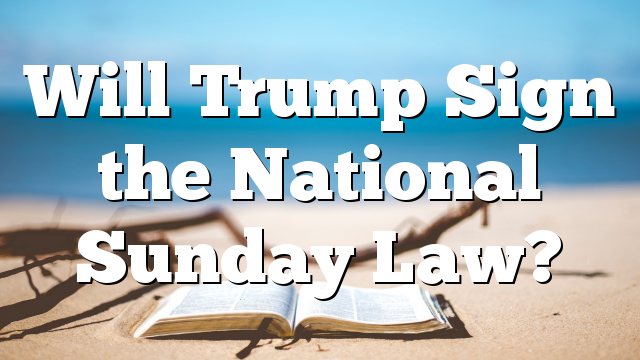 National Sunday law is a conspiracy theory which alleges that the United States government is on the verge of enacting a national blue law that would make Sunday a day of rest and worship. The theory is based on the idea that the Pope is the Antichrist and the Mark of the Beast is worshipped on Sunday. Sinister forces (read: the Vatican) are conspiring to enact a national Sunday law in the United States, which would be the trigger that unleashes the fulfilment of the prophecies found in the Biblical books of Daniel and Revelation. In addition, this law would outlaw worshipping on Saturday, thus beginning a period of persecution of those who worship on Saturday, or Sabbath. This idea originated within Seventh-day Adventism (which considers the Sabbath to be Saturday), and some on the fringes of the SDA church have taken a handful of failed Congressional bills and papal writings and inflated them into the trigger of the apocalypse. This is quite ironic considering that you would think blue law opposition would come from more secular groups.

Holiness at Charleston or Church of God at Tellico Plains?

Has it been resolved as to which came first the holiness (fire baptized movement) at Charleston, TN or the Church of God at Tellico…