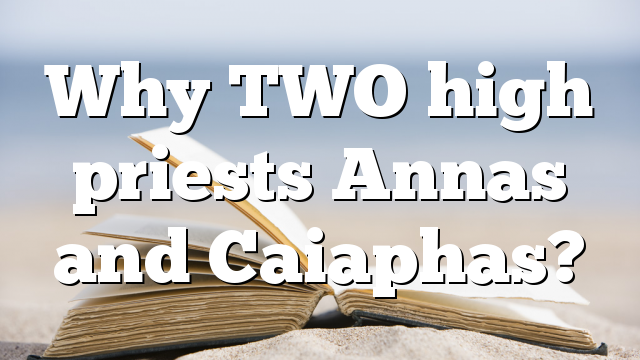 Answer: Annas and Caiaphas are two high priests mentioned during Jesus’ public ministry (Luke 3:2). In that period of history, high priests were installed and removed by Roman rulers. While it is not recorded in the Bible, the tradition is that the Romans had deposed Annas and made Caiaphas the high priest. So, officially, Caiaphas, the son-in-law of Annas, was high priest during Jesus’ ministry, but Annas, the former high priest, still held significant sway and was still called a high priest (John 18:13).

Jesus’ trial before Annas and Caiaphas was marked by false testimony and conflicting reports of what Jesus had done and said (Mark 14:56). Through it all, “Jesus remained silent and gave no answer” (verse 61). Caiaphas began to despair of finding enough evidence to put Jesus to death, but then he asked Him directly, “Are you the Messiah, the Son of the Blessed One?” (verse 61). Jesus answered, “I am. . . . And you will see the Son of Man sitting at the right hand of the Mighty One and coming on the clouds of heaven” (verse 62). At this, Caiaphas tore his clothes, decreed Jesus to be a blasphemer, and turned Him over to a mob who beat Him (verses 63–65).

Annas and Caiaphas are also mentioned in Acts 4:6 when Peter and John were questioned before the Jewish rulers: “Annas the high priest was there, and so were Caiaphas, John, Alexander and others of the high priest’s family.” Filled with the Holy Spirit, Peter responded boldly. He gave credit to Jesus Christ of Nazareth for the healing of a lame man (Acts 3:1–10; 4:9–10), reminded the rulers that they had crucified Jesus, and proclaimed that God raised Jesus from the dead (Acts 4:10). Peter also declared that salvation is found in no one but Jesus (Acts 4:12). The Jewish authorities were astonished by the disciples’ demeanor, particularly given that they were ordinary men, and recognized the disciples had been with Jesus. The rulers had been “greatly disturbed because the apostles were teaching the people, proclaiming in Jesus the resurrection of the dead” (Acts 4:2) and wanted to halt the spread of the movement. So, despite the obvious work of God, they charged Peter and John to stop teaching in Jesus’ name. The disciples refused. The rulers threatened them further, but could not punish them “because all the people were praising God for what had happened. For the man who was miraculously healed was over forty years old” (Acts 4:21–22).

Significantly, Caiaphas had unwittingly prophesied regarding Jesus’ death. When the Sanhedrin was plotting to kill Jesus, Caiaphas “spoke up, ‘You know nothing at all! You do not realize that it is better for you that one man die for the people than that the whole nation perish.’ He did not say this on his own, but as high priest that year he prophesied that Jesus would die for the Jewish nation, and not only for that nation but also for the scattered children of God, to bring them together and make them one” (John 11:49–51; cf. John 18:14).

Though both Annas and Caiaphas plotted against Jesus and sought to inhibit the spread of the gospel, both were used of God to further His plan. Caiaphas was right; it was good for one man to die for all people. Because that Man died on our behalf, we can be granted eternal life through faith in Him (Ephesians 2:8–10;Romans 5:12–20; Hebrews 7:27).

Be Available to Bless

BE AVAILABLE TO BLESS – Ray E Horton I have discovering over and over that when I make myself available to bless others, the…