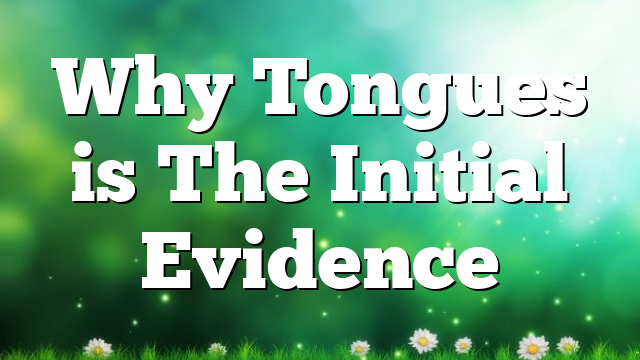 Why Tongues? The Initial Evidence Doctrine in North American Pentecostal

There is perhaps no question more universally asked about Pentecostalism than “WhyTongues?” In this monograph, Kenneth R.Walters, Jr. seeks to answer the question of why the doctrine of initial evidence was so important to early Pentecostals. Walters’ main thesis is that the doctrine of initial evidence is a direct result of the influence that Common Sense Realism (CSR) had on evan- gelical theology in the late 19th and early 20th centuries. Walters begins in chapter one by demonstrating how most studies about initial evidence have been primarily with concerned with the biblical or historical issues surround Pentecostalism’s most “distinctive doctrine.” Though scholars like Mark Noll and George Marsden have documented the effects of CSRon biblical interpre- tation and Fundamentalism,Walters is the first to show howCSRpaved the way for the elevation of “evidence” in Pentecostal doctrine.

In chapter two, Walters begins with a history of CSR from its origins in the writings of Thomas Reid and his reaction to idealism in the writings of David Hume. Reid argued that Hume’s philosophy called into question the epistemo- logical assumptions of human knowledge that were essential to the empirical sciences. Hume’s skepticism of human knowledge led Reid to argue that phi- losophy needed a new set of assumptions based on human reason and “com- mon sense.” Common sense, for Walters, refers to the perceptions delivered to humanity based on the common ability to use their senses to receive knowl- edge.CSRaffirmed that human beings could in fact trust their senses as sources for knowledge. In America, CSR found a home at Princeton in the writings of B.B. Warfield and shaped how evangelicals did theology.CSRbecame a rallying point for evangelicals in the struggle against modernism and their higher criti- cal methodology, which eventually evolved into Fundamentalism. The empha- sis on “reasonable” religion and rational faith based on evidences was spread by D.L. Moody and other revivalist evangelicals and eventually into the Pen- tecostal movement. It was this emphasis on evidence, Walters argues, that set the stage for the impulse within Pentecostalism that the baptism in the Spirit should be verified by evidence.

In the next four chapters, Walters seeks to show howCSRshaped four major influences that eventually culminated in the Pentecostal movement. In chap- ter three, he discusses howCSRcontributed to the rise of “Christian Evidences” literature. Because modernism was creating skepticism about truth, conserva- tives turned to Christian evidences to argue for the the divine origin of the

Bible, the deity of Christ, the validity of prophecy, and the reliability of mir- acles. By appealing to reason and the senses, CSR ultimately shaped the way evangelicals understood spirituality by emphasizing that there should be “evi- dences” of God working in people’s lives.

In chapter four, Walters shares a history of the Cane Ridge revival and how the importance of religious experience became a powerful evidential orien- tation for revivalism. A particularly helpful section of this chapter is his dis- cussion of the various “experiences” that characterized Cane Ridge and what that meant for how people understood the role of experience. TheCSRimpulse to seek verification morphed into encouragement to seek physical manifesta- tions as evidence of God’s working in revivalist and holiness camp meetings. By connecting the importance of evidences and experiences, Walters argues per- suasively that an emphasis on the evidence of tongues would naturally follow. This important connection, often overlooked by scholars, gets at the heart of the epistemological assumptions of Pentecostal theology.

In chapter five, Walters argues that premillennialism laid the groundwork for Pentecostalism by employing a literalist biblical interpretation of the Bible and by emphasizing the pneumatic and eschatological impulse in evangelism. Walters then turns to the writings of Azusa and several other early Pentecostal periodicals to show that premillennialism, pneumatology, and evidences all worked together to fuse these orientations into the one doctrine of the baptism in the Holy Spirit. In chapter six, he notes how restorationism, a topic covered quite thoroughly in other studies, also contributed to Pentecostal theology by turning expecting apostolic experiences and manifestations.

In chapter seven, Walters walks the well-worn path of the role of evidence in early Pentecostalism. He engages early Pentecostal literature in order to show how most of the early leaders, including Charles Parham, William Sey- mour, J.H. King, A.J. Tomlinson, and Aimee Semple McPherson, all affirmed that speaking in tongues was “the evidence” of the baptism in the Spirit. CSR provided the foundation, evidence literature encouraged the impulse toward verification, revivalism encouraged experience, premillennialism focused on Bible evidence, and restorationism became the basis for choosing the evidence.

Walter’s work is engaging, well researched, and brings out several points in this conversation about the evidence of Spirit-baptism that are helpful. First, he is persuasive in his argument that the CSR provided the philosophical ori- entation that birthed the Pentecostal impulse for evidence in their distinctive doctrine. The only chapter that fell short of that goal was the chapter on pre- millennialism, which had the potential to connect end times prophecy with the CSRemphasis on evidence and would have made more sense than his mission- eschatology-pneumatology emphasis. Second, he is able to demonstrate how

CSR and its emphasis on rationalism did not hinder the emphasis on experi- ence; it actually gave expression to it.This to me is an important and overlooked element that helped shape revivalist spirituality.Third, the chapter on the early Pentecostal position is helpful for historians who are looking to understand not only what they believed about evidence, but how they talked about it. The one glaring omission from this chapter is William Durham, who fits his thesis per- fectly in thatCSRcan be easily seen in his finished work theology and insistence on initial evidence. Yet, he was only mentioned briefly (152). Finally, for a study about Pentecostalism’s most recognizable doctrine, his final chapter on initial evidence seems a bit brief compared to the amount of space devoted to dis- cussing the antecedents that lead up to the Pentecostal movement. However, I did find it sufficient to round out his research and considering how well known the topic is in Pentecostal circles.

Walter’s study is a fresh look at a familiar topic that is important to the Pente- costal movement. His quality research, his attention to sources, and his overall thesis is compelling and should be a must read for Pentecostal scholars in this field.

Did James & the elders in Jerusalem advise Paul to compromise in Acts 21:21-24?

And they are informed of thee, that thou teachest all the Jews which are among the Gentiles to forsake Moses, saying that they ought not to circumcise their children, neither to walk after the customs. …