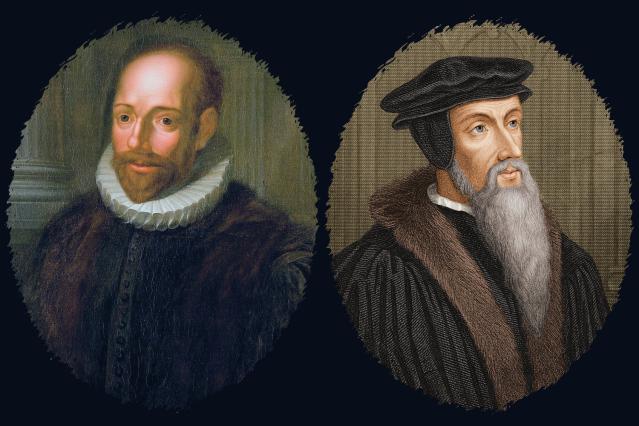 
FacebookTwitterSubscribe
Arminianism, as with the overall theology of the early Church fathers, will never die. Calvinism experiences ebb and flow in popularity but Arminianism and other non-Calvinistic theological systems remain constant. I argue, though, that Calvinists should, because of this truth, advance the theology of Arminius among those who refuse to adopt Calvinism. Why? Because Arminius is as close as one gets to Calvinism without embracing Calvinism. Whether we consider Simon Episcopius, Hugo Grotius, Philipp van Limborch (and other lesser known Remonstrants like Jan Uytenbogaert, Gerhard Vossius, Caspar Barlaeus, Johann Oldenbarneveldt and Conrad Vorstius), John and Charles Wesley, Thomas Coke, Francis Asbury, Adam Clarke, Richard Watson, or H. Orton Wiley, not one of these theologians, including John Wesley himself, is as Reformed in his thinking as is the Dutch Reformed scholastic theologian Jacob Arminius.

Calvinist scholar Dr. Richard A. Muller laments that the theology of Arminius is “neglected both by his admirers and by his detractors.”1 Though he disagrees with the tenor of Arminius’ theology, Muller can objectively regret the loss of Arminius over the last four centuries, and place Arminius within his rightful Reformed context: “Arminius’ theology must, in fact, be interpreted in the context of the development of scholastic Protestantism as a scholastic theology in its own right.”2 Arminius is not some rogue heretic intent on the ruination of the Church. Muller confesses that, if Arminius is teaching a theological message “stylistically and doctrinally widely divergent from and foreign to the Reformed mind of his time, he could have been ignored or at least easily dismissed.”3 This is a remarkable statement that requires some attention.

Muller is not necessarily attempting to vindicate Arminius’ deviation from Calvinism. He admits that Arminius does not “follow the [scholastic] Reformed down the path of radical monergism and strict [unconditional] predestinarianism.”4 This is the primary reason why the Remonstrants abandon the scholastic method — and inadvertently lose Arminius in so doing — for the rhetorical and exegetical method of interpreting Scripture: in order to combat Calvinistic ideology. Arminius, however, maintains his scholasticism and yet breaks methodological tradition by rejecting strict monergism and unconditional election. In other words, this is tantamount to affirming one’s belief in the sovereignty of God, within a Reformed context, but rejecting exhaustive and meticulous determinism. How is this accomplished? By properly defining and biblically contextualizing the sovereignty of God.

Regardless, what we find in Arminius is a similar style of Reformed thinking, but a void of Calvinistic excess. The atonement in Arminius, for example, is substitutionary in nature and satisfactory to God the Father.5 Passages throughout Scripture (e.g., John 1:29; 1 Tim. 4:10; 1 John 2:2) refer not to automatic, universal salvation, but to the explicit extent of the atonement. The atonement of Christ is capable of saving all people, without qualification, even though the atonement of Christ will not save all people without qualification, since the condition for the application of the atonement procured for all people is faith in Christ (cf. Rom. 3:25 ESV) by the enabling grace of the Holy Spirit. While in Arminius we will not find a strict limited atonement theory, such is due to his rejection of unconditional election, which actually necessitates, logically, a limited atonement theory in intent and extent. Whom has God elected to save? Beyond any semblance of doubt the doctrine of election and predestination is the capstone of controversy for Arminius and his Dutch Reformed colleagues. Like the early Church fathers, prior to St Augustine in the early fifth century, Arminius argues, along with St Paul, that God has elected to save those who, by the inwardly-working grace of the Holy Spirit, believe in Jesus Christ (1 Cor. 1:21). Though Calvinists disagree, they can at the very least be grateful for two primary aspects of Arminius’ theology on election: 1) God has always foreknown His elect (and the stubborn reprobate); and 2) no one comes to faith in Christ apart from the inward work of grace by the Person of the Holy Spirit.

In other words, Arminius may reject Calvinism, but he also rejects Pelagianism and Semi-Pelagianism. For one searching for a moderate or middle position between Calvinism and Semi-Pelagianism, Arminius’ theology is just that, the via media. Why must a sufficient prior work be performed by the Spirit of God? Because, in our fallen and sinful state, the free will of man and woman towards God and His gracious offer of salvation in and through Christ is “not only wounded, maimed, infirm, bent, and . . . weakened; but it is also . . . imprisoned, destroyed, and lost: And its powers are not only debilitated and useless unless they be assisted by grace, but it has no powers whatever except such as are excited by Divine grace.”6 Calvinist R. C. Sproul confesses: “The language of Augustine, Martin Luther, or John Calvin is scarcely stronger than that of Arminius.”7 We are at a loss as to how Arminius could be stronger.

How does God know His elect? Arminius does not use the sloppy reasoning of God “looking down through the corridors of time in order to see who would and who would not believe.” Such an analogy renders God in the vein of the Open Theist: God is learning. No, God does not learn any aspect of reality, but He is the source of all that exists. For Arminius, God’s exhaustive and meticulous knowledge is derived “by His own and sole essence . . . He knows all possible things in the perfection of their own essence,” as the Calvinistic Westminster divines also confess (link), and “therefore all things impossible.”8 Moreover, the exhaustive and meticulous “understanding of God is certain and infallible.”9 (emphasis added) In the eternal mind of God, and by His own divinely-initiated creative act, He has always known every single individual as either elect or reprobate. This notion is as close to Calvinism as one can get without actually adopting Calvinism. The subject of salvation is settled in the eternal mind of our omniscient God.

These issues are important for the Calvinist since, if a person must reject Calvinism, then there is a theology for such a person that is still broadly Reformed, still strictly Protestant and Trinitarian, and will keep the individual from erring theologically. In Arminius, one maintains original sin, and Adam as representative head of all fallen mortals; as a result each person is born totally depraved and completely incapable of coming to faith in Christ apart from the ministry of the enabling Holy Spirit; God will graciously save the believer but will condemn the unbeliever; the atonement of Christ is offered to all but applied solely to the elect — i.e., those who believe in Christ; and the one who by the inward grace of the Holy Spirit perseveres by faith in Christ shall be saved. God has always known such and they are named His elect.

I think Calvinists should advance Arminius for those who reject Calvinism. Arminius delivers one from Pelagianism and Semi-Pelagianism; he warns them of the dangers of merit and good works within Roman Catholicism; he argues against merit and good works as means of obtaining salvation and the justification of God. In Arminius one learns her need to be born anew of the Spirit of God, by grace through faith in Christ, and justified by God in Christ; he guards people, with his avid Trinitarian theology, from the damnable errors of Unitarianism; he secures one theologically within a broadly Reformed context of a substitutionary atonement and an aggressively-motivated sufficient, necessary, and enabling grace of the Holy Spirit; his sole confidence in all his theological knowledge rests in the authority of the divine and infallible Word of God; and he rescues people tempted by the lure of Open Theism by connecting the knowledge and foreknowledge of God to His very essence. Such might be the attitude of modern Calvinists: “If you must reject Calvinism, then at least embrace Arminius.”

6 Jacob Arminius, “Twenty-Five Public Disputations: Disputation XI. On the Free Will of Man and Its Powers,” in The Works of Arminius, the London edition, three volumes, trans. James and William Nichols (Grand Rapids: Baker, 1996), 2:192.