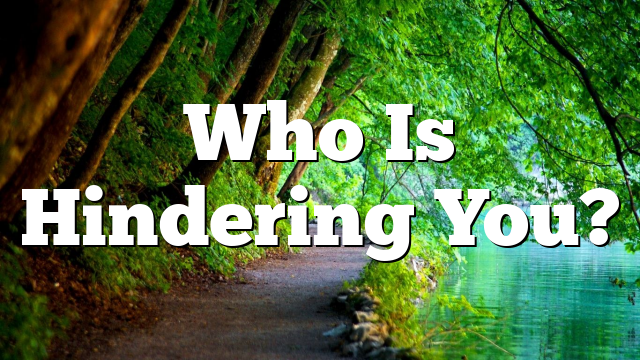 WHO IS HINDERING YOUR
SERVICE TO THE LORD? – Ray E Horton

When you are serving in the will of God, and you are hindered, some think it’s the Holy Spirit, and some think it is Satan who does the hindering. But, according to scripture, it could be either.

In Acts 16:6ff Paul intended to preach in Asia, but was prevented by the Holy Spirit, who wanted Him to preach in Macedonia.

“…They were forbidden by the Holy Spirit to preach the word in Asia. After they had come to Mysia, they tried to go into Bithynia, but the Spirit did not permit them. So passing by Mysia, they came down to Troas. And a vision appeared to Paul in the night. A man of Macedonia stood and pleaded with him, saying, ‘Come over to Macedonia and help us.’ Now after he had seen the vision, immediately we sought to go to Macedonia, concluding that the Lord had called us to preach the gospel to them” (Acts 16:6-10).

Note that they obeyed “immediately” to the Lord’s call to preach in Macedonia. God knows how to prioritize our missions better than we do. Let us respond accordingly.

The next time you are hindered in doing something for the Lord, it could be the enemy, or it could be that the Lord has another plan for you. So, don’t assume – seek Him for the answer

On the other hand, Paul writes to the Thessalonians, “We wanted to come to you—even I, Paul, time and again—but Satan hindered us” (1 Thess. 2:18).

The next time you are hindered in doing something for the Lord, it could be the enemy, or it could be that the Lord has another plan for you. So don’t assume – seek Him for the answer.

I like the explanation of this 1st Thessalonians passage in Andrew Wommack’s commentary: “This is an amazing passage of scripture. Many people don’t think Satan has the power to hinder anything if an individual is in the center of God’s will as Paul was. They mistakenly think that everything going smoothly is a token of God’s direction. Any problems we encounter must mean we missed God. That is not what Paul is describing here.

“Satan has severe limitations and he cannot just devour everyone (1 Pet. 5:8), but there are certain things he can do to even those who are operating in the power of the Holy Spirit. The biggest area in which he can hinder us is when what we are believing for involves other people.

“For instance, our financial prosperity involves others. People can’t stop us from prospering, but they can certainly hinder us. And in the area of persecution, God will not just “wipe out” all those who oppose us so that we can preach the gospel without any hindrance. He loves even those who reject Him. God’s mercy towards those who persecute us may cause us some hardships, but it allows the unbelievers the opportunity to receive salvation.

“Paul made a similar statement to this one in Romans 15:22-23. In that passage, he explained that the hindrance to his traveling to Rome was that there were unreached people around him that he felt compelled to preach to before he could leave them. It is most probable that he is describing the same thing here. He wanted to return to Thessalonica but Satan was hindering the preaching of the gospel and so it was taking Paul longer than he anticipated to finish his work there.”

1Co 15:28 ISV But when everything has been put under him, then the
Son himself will also become subject t…