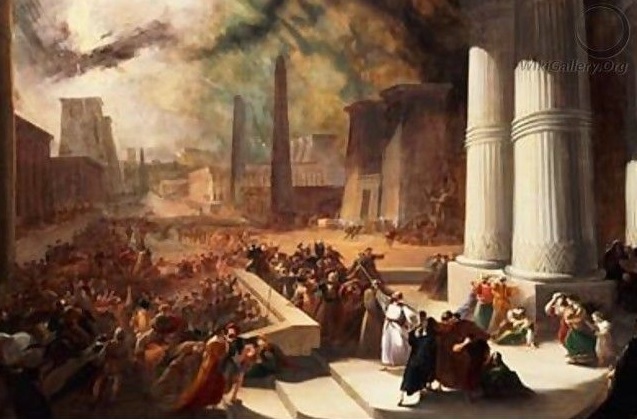 Here’s something IO noticed in reading Revelation 11:6 in the RSV re; the two witnesses:

“They have power to shut the sky, that no rain may fall during the days of their prophesying, and they have power over the waters to turn them into blood, and to smite the earth with every plague, *as often as they desire*.”

Note: “as often as they desire.”

That is, it seems to me, whatever they desire to do, God desires to do; or, I think it can be said that, once given the power to perform wonders, and let them have at it.

This is granting not only authority to power but authority to use that power freely according to their own wishes; they are given freedom to exercise their powers however and as often as they choose. It seems they don’t even need to necessarily pray if they should cause it to rain or cause drought, but only say the word and it is done. At the risk of sounding heretical or (blasphemous to those who may take the extreme), it’s as if God has made himself at the disposal of the two witnesses to do according to their word.

I find this intriguing. I have not found anything on this particular phrase, “as preteen as they wish,” in any of the commentaries I have (which is not many and none of Revelation that Pentecostal/Charismatic.

Any thoughts on this? Is anyone aware of any commentary that engages on this?

Marc Alfano [08/22/2015 10:53 PM]
If you are open to some creative hermeneutics, without sounding heretical or blasphemous, it says witnesses, not actual people, which could be Jesus and the Holy Spirit.
Now the Lord is the Spirit, and where the Spirit of the Lord is, there is Liberty.
There is reference to them as two olive trees and two lamp stands (old and new testaments) notice vs. 5 about fire proceeding out of their mouth and consuming their enemies, much like a two edge sword (the Word of God).
Check out 1Kings 18:24, Luke 10:17-20, 2 Kings 1:7-16, Luke 9:51-56, Acts 2:2-4

Nelson Banuchi [08/22/2015 11:02 PM]
Marc Alfano, not intending to argue but, as I read the text, it does say they are witnesses but described these witnesses as persons.

If you believe the witnesses are Jesus and the Holy Spirit, I’ve no problem with that and I can appreciate how you seem to have resolved the issue I presented in the OP.

However, I’m not certain your interpretation that the witnesses are Jesus and the Holy Spirir is correct.

Nelson Banuchi [08/22/2015 11:04 PM]
John Kissinger: To answer your question, I believe the two witnesses are actual persons. As such, what are your thoughts re: the OP?

Nelson Banuchi [08/22/2015 11:14 PM]
Marc Alfano: I think you know what I mean. I don’t deny the personhood of the triune God. I’m talking about the witnesses actually being two people whom God has chosen to use for that time and circumstance.

Like I said, I appreciate how you resolved the issue; my point of argument is not with identifying who are the two witnesses.

Marc Alfano [08/22/2015 11:26 PM]
All I am saying is the disciples thought Elijah had to preceded the Messiah, but Jesus said he came in the spirit of John the Baptist. Things can be literal and actual but in the Spirit, not in a physical form. (Eat my flesh and drink my blood) (born again, not entering your mother’s womb a second time) Kingdom of God is not eating and drinking but righteousness, peace and joy in the Holy Spirit.

Brenda Smith [08/22/2015 11:31 PM]
Some Bible teachers say Moses and Elijah since these were the two also with Jesus on the Mt of Transfiguration and represent the law – Moses and the prophets – Elijah. Others teach it will be Enoch and Elijah since these two have never died and since flesh and blood cannot inherit the kingdom of God 1 Cor 15:50..they will have their glorified bodies upon death when the witnesses ascend 31/2 days after the beast of Rev 11:7-12 kills them.

Marc Alfano [08/22/2015 11:47 PM]
Right, that is what I always assumed too. But even that is speculation.
A lot of end time doctrine (eschatology) is cherry picked scripture weaved together into a tapestry of systematic theology that seems to make logical sense, but much of what goes on in the Bible is not based on linear time but the eternal realm of God’s presence- the Alpha and Omega!

John Kissinger [08/22/2015 11:52 PM]
They are “the two olive trees” always a representation of Israel in the Bible and “clothed in sackcloth” – not a ritual of too many Gentiles

Marc Alfano [08/22/2015 11:57 PM]
In Christ there is neither Jew nor Greek, slave or free, male or female. You are being literal again- will make you stumble over understanding the spirit of the word not the letter of the word.

The issue is that whoever these witnesses are, it seems clear that they are exerting the divine authority given to them at their discretion; that is, God is not necessarily directing when and what acts of wonder they are to perform but is granting them not only the power to perform but the authority to perform is as they wish.

Okay, we’ll allow that as a possibility.

My question is, what other interpretations of the text are there and how do they comment on the main issue that these “witnesses” were able to not only perform wonders but to do so at heir discretion?

Primarily, I’m seeking to know if there is any scholarly opinion or commentary that deals with the text regarding the witnesses seeming freedom to perform acts of wonder at their discretion.

Nelson Banuchi [08/23/2015 5:40 PM]
John Kissinger, my point is that the verse seems to suggest that the witnesses are exercising the use of God’s power at their discretion, as they wish, when they want, not necessarily making any suggestion that it is under God’s direction or will.

Am I making myself clear?

Marc Alfano [08/23/2015 6:06 PM]
What you are describing is witchcraft! Using power for your own purpose apart from God’s will.
Not even Jesus used his power on his own-
i.e. the temptations by the Devil to act unilaterally with his power, even to meet legitimate needs or desires.
John 5:17-30 Jesus only does what he sees the Father doing and does nothing on his own initiative. God, in turn, gives all power and authority to the Son.

Brenda Smith [08/23/2015 9:18 PM]
There were times that the prophets Elijah and Elisha seem to have acted at their own discretion Elijah 1 Ki 17:1 told King Ahab that there would be no rain, but according to his word. Elijah also called fire down from heaven in 2 Ki 1:10…..Elisha 2 Ki 5:27 spoke leprosy upon his disobedient servant. And of course, both prophets parted the waters of the Jordan and passed over on dry ground. The words of Rev 11:6….have power….and….. as often as they will…..appear to give the two witnesses the latitude to act as they deem appropriate.

First, where have I stated exercising the divine power at one’s own discretion necessarily involves doing so for one’s own purpose or against God’s will?

I’m not suggesting anything definitive one way or the other; I’m just putting out things to consider.

John Kissinger [08/23/2015 11:28 PM]
It is not at their own discretion if the text says “I will appoint my two witnesses” Are you arguing they have free will independent from the mission of God they were sent for? Please explain your point if you can

Marc Alfano [08/24/2015 12:19 AM]
Nelson Banuchi, I don’t know what your confusion is but this discussion is a waste of time. Good luck, I’m done. You don’t seem to want to get it. Jesus said “I and the Father are one”
Philip said to Jesus show us the Father- Jesus said “how long have I been with you Philip” don’t you know me? Jesus can’t act independent of God because he is God but also the son of man. Satan is the one who uses his power contrary to God’s will because he is a liar and the father of lies and there is no truth in him. What you are describing is voodoo and witchcraft, using supernatural powers for your own purposes, even for good, without the presence and will of the Holy Spirit. If you are not under the anointing of the Holy Spirit you are operating on your own. Like Cain and Able, God has no regard for Cain’s efforts no matter how sincere because he is doing it on his own apart from God! They are “filthy rags” in God’s sight.

James Price [08/24/2015 2:33 PM]
Two Witnesses: We should remember that several of those who were on the committee to assemble and include the letters in the N T, voted to keep Revelation out because it was too confusing and subject to many diverse interpretations. No one was for sure who the actual writer was and even if was John one of the apostles he would have been in his nineties by then and very well may have been hallucinating. To draw the conclusion that men would be given the power that you mention takes us beyond anything we have seen elsewhere and therefore ought to be dismissed as purely a dream or a vision, nothing more.