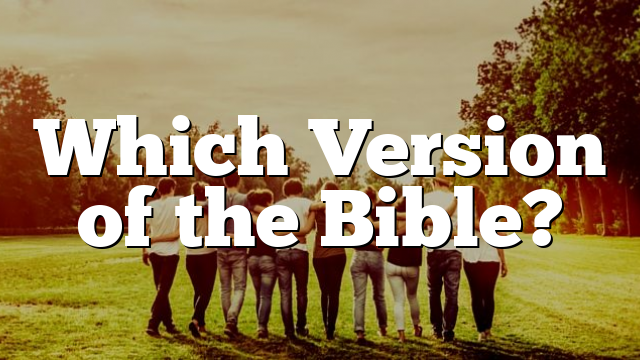 USE MANY BIBLE VERSIONS FOR STUDY

I am often asked what the best version of the Bible in English is. Many churches and preachers use the King James Version only. Others find the archaic language of 17th century England confusing, and prefer a more modern translation. Then there is the argument of which is most accurate.

For Bible study, where I am carefully looking for the correct meaning, I prefer to use multiple versions, always including the King James as one of them

I personally use a more modern translation for regular reading, currently the Modern English Version, the New American Standard before that, and the New King James and the New International Versions before that.

Having read through the Bible many times, I am transitioning to more time spent in Bible study. For Bible study, where I am carefully looking for the correct meaning, I prefer to use multiple versions, always including the King James as one of them. The easiest way to do that is with an online resource like Bible Gateway. With Bible Gateway I can search by passage reference or keyword and bring up any five versions in parallel columns.

Newer translations are based on more manuscripts, but those who argue for the King James Version have a point that the KJV New Testament is based on what many consider the best Greek manuscript, Textus Receptus. The Modern English Version is also translated from the Textus Receptus. It is argued that most newer translations are based on manuscripts that were older and appeared in better condition, but only because they weren’t used much due to many errors found in them.

I also look to consistency in the presentation of revealed doctrine. Interestingly, I find the King James strong in that area. To the extent that if the KJV hasn’t been clearly proven wrong in the translation of a particular passage, I will usually favor it over others.

Read and Study with Prayer

I believe the safest way to read the Bible to hear what God is saying is with prayer for eyes to see, allowing Holy Spirit revelation and with pen in hand. After all, we do consider it the written Word of God.

No matter which translation you use, if you come across something that appears inconsistent, questionable or confusing, write it down, then when you are done reading, look that passage up in several versions. For a non-Hebrew/Greek scholar like myself, concordances and lexicons and other tools are also helpful.

I believe that for the most-part, we should let the Word speak for itself. You can read commentaries, but too often people will try to make the Bible say what they believe. So, go to the Word open to the Holy Spirit, the Spirit of Truth, to open your eyes.

Church of God Instructions for Ministers: Marriage and Same-sex Relationship

Church of God Instructions for Ministers: Marriage and Same-sex Relationship (75th A., 2014) p. 158-159, S63. GENERAL INSTRUCTIONS FOR MINISTERS, by adding the following so as…