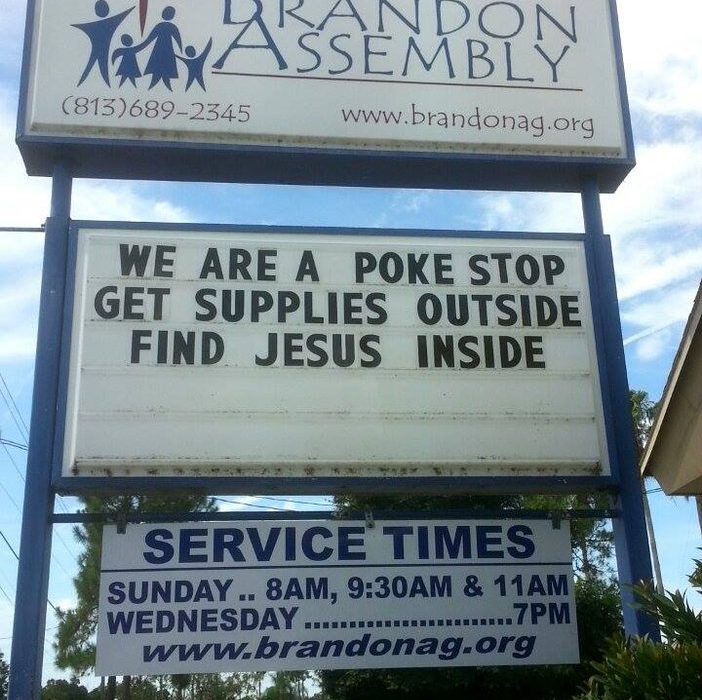 The new Pokemon Go game uses the GPS on your phone to place you in its Pokemon world. On the main screen it is usually difficult to miss the gyms – they’re the biggest icons on your map. And in many cases they are churches.

This game is dangerous. We had 3 strange grown men playing the game on the church property yesterday. One dude had a big hunting knife strapped to his belt and when we confronted him, he said he was just playing a game.

The game creators have marked most churches as a place for players to gather. We have contacted them and asked if they will remove us from what they designate as a “gym” for players to fight each other to get stronger.

This augmented reality game is also collecting data from players Google accounts and private property views that Google maps could not get otherwise. The game is going to create a lot of legal chaos.

Maybe you could setup an outdoor stage and preach the gospel while they are pokemon-fighting?

The persona playing the game is NOT JUST APPEARING AT A LOCATION, but (most PROBABLY) TAKING VIDEO OF IT

Oh look what we found! Come & get yours #pokemongo pic.twitter.com/Ks5BJuf1rG

The church in our neighborhood is a pokestop and put out water for weary Pokemon hunters. #PokemonGO pic.twitter.com/Gx4Qr2gTCW

How to get kids to go to church: Place a #PokemonGo gym there pic.twitter.com/vtnyvSrRxS

Shoutout and praises to the #PokemonGO Gym trainer at Trinity United Methodist Church in #ArlingtonTX for starting w/ a 100level Pokemon ??

Was playing #PokemonGO and headed to a nearby church to get Pokeballs and ran into a friend I haven’t seen since high school.

Trainers are welcome at our church! Jesus loves you no matter what team you chose or color you are #PokemonGO pic.twitter.com/5bf3OjyAGm

FacebookTwitterSubscribe
Subscribe to receive all news to your email or phone: [wysija_form id="1"]
churchgympokémon