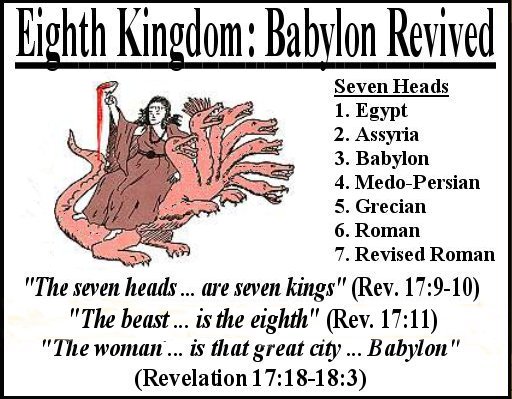 A MESSAGE I PREACHED AT GATE’S OF PRAISE P. C. G. THIS MORNING.

What is the whore of Babylon / mystery Babylon?”

[1] And there came one of the seven angels which had the seven vials, and talked with me, saying unto me, Come hither; I will shew unto thee the judgment of the great whore that sitteth upon many waters:
[2 ] With whom the kings of the earth have committed fornication, and the inhabitants of the earth have been made drunk with the wine of her fornication.

” Revelation 17:5 goes on to say, [5] And upon her forehead was a name written, MYSTERY, BABYLON THE GREAT, THE MOTHER OF HARLOTS AND ABOMINATIONS OF THE EARTH“And on her forehead a name was written: ” Who is this “whore of Babylon” and what is “mystery Babylon”?
Revelation 17:3 gives this description: “[3] So he carried me away in the spirit into the wilderness: and I saw a woman sit upon a scarlet coloured beast, full of names of blasphemy, having seven heads and ten horns..”

The beast mentioned in this verse is the same beast as in Revelation chapter 13:1, “And I saw a beast coming out of the sea.
He had ten horns and seven heads, with ten crowns on his horns, and on each head a blasphemous name.” The beast in Revelation chapter 13 is understood to refer to the Antichrist, the man of lawlessness (2 Thessalonians 2:3-4;)

[3] Let no man deceive you by any means: for that day shall not come, except there come a falling away first, and that man of sin be revealed, the son of perdition;
[4] Who opposeth and exalteth himself above all that is called God, or that is worshipped; so that he as God sitteth in the temple of God, shewing himself that he is God.
and (Daniel 9:27). Says

[27] And he shall confirm the covenant with many for one week: and in the midst of the week he shall cause the sacrifice and the oblation to cease, and for the overspreading of abominations he shall make it desolate, even until the consummation, and that determined shall be poured upon the desolate.

So, the whore of Babylon, whoever it is, is closely affiliated with the end-times Antichrist.

The fact that the whore of Babylon is referred to as a mystery means that we cannot be completely certain as to her identity. The passage does give us some clues, however. Revelation 17:9 explains, “This calls for a mind with wisdom.

The seven heads are seven hills on which the woman sits.” Many commentators link this passage with the Roman Catholic Church because in ancient times, the city of Rome was known as “the city on seven hills” because there are seven prominent hills that surround the city.
However, verse 10 goes on to explain that the seven hills represent 7 kings or kingdoms, five of which have fallen, one that is and one that is to come.

Therefore, the “whore of Babylon” cannot refer exclusively to Rome.

Revelation 17:15 tells us, “Then the angel said to me, ‘The waters you saw, where the prostitute sits, are peoples, multitudes, nations and languages.”

The whore of Babylon will have great worldwide influence over people and nations.

Verses 10-14 describe a series of eight and then ten kings who affiliate with the beast.
[10] And there are seven kings: five are fallen, and one is, and the other is not yet come; and when he cometh, he must continue a short space.
[11] And the beast that was, and is not, even he is the eighth, and is of the seven, and goeth into perdition.
[12] And the ten horns which thou sawest are ten kings, which have received no kingdom as yet; but receive power as kings one hour with the beast.
[13] These have one mind, and shall give their power and strength unto the beast.
[14] These shall make war with the Lamb, and the Lamb shall overcome them: for he is Lord of lords, and King of kings: and they that are with him are called, and chosen, and faithful.

The whore of Babylon will at one time have control over these kings (Revelation 17:18), [18] And the woman which thou sawest is that great city, which reigneth over the kings of the earth.but at some point the kings will turn on her and destroy her (Revelation 17:16).

[16 ] And the ten horns which thou sawest upon the beast, these shall hate the whore, and shall make her desolate and naked, and shall eat her flesh, and burn her with fire.

“Stay Connected To The River” with Jentezen Franklin