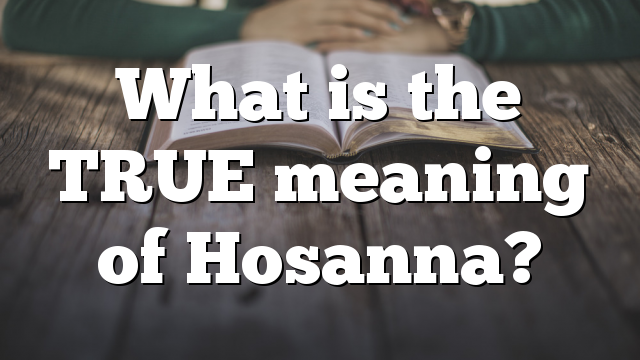 But if you look in a Greek dictionary to find what it means, you know what you find? You find that it is really not originally a Greek word after all. The men who wrote the New Testament in Greek did the same thing to a Hebrew word that our English translators did to the Greek word: they just used Greek letters to make the sound of a Hebrew phrase. I know this sounds sort of complicated. But it’s really not. Our English word “hosanna” comes from a Greek word “hosanna” which comes from a Hebrew phrase hoshiya na. And that Hebrew phrase is found one solitary place in the whole Old Testament, Psalm 118:25, where it means, “Save, please!” It is a cry to God for help. Like when somebody pushes you off the diving board before you can swim and you come up hollering: “Help, save me . . . Hoshiya na!”

Joyful Aramaic exclamation of praise, apparently specific to the major Jewish religious festivals (especially Passover and Tabernacles) in which the Egyptian Hallel (Psalms 113-118) was recited. Originally an appeal for deliverance (Heb. hosia na, Please save Psalm 118:25 ), it came in liturgical usage to serve as an expression of joy and praise for deliverance granted or anticipated. When Jesus came to Jerusalem for his final presentation of himself to Israel, the expression came readily to the lips of the Passover crowds.

In the Bible the expression occurs only in accounts of that event. Matthew, Mark, and John all transliterate it (Luke does not, but appears to paraphrase it with the Greek word for “glory”: see his “glory in the highest,19:38 ). According to Matthew, the crowd that accompanied Jesus that day shouted “Hosanna to the Son of David!” (21:9), as did the children later in the temple (v. 15). Mark ( 11:9 ) and John ( 12:13 ) do not have “to the Son of David, ” but all three follow the opening cry with, “Blessed is he who comes in the name of the Lord!” (from Psalm 118:26 ). Matthew and Mark conclude the people’s cries with “Hosanna in the highest” (apparently an echo of Psalm 148:1 ), which John omits. But Mark inserts “Blessed is the coming kingdom of our father David” ( 11:10 ), and John adds, “Blessed is the King of Israel” ( 12:13 ). These appear to be interpretations of “he who comes in the name of the Lord.” And they agree essentially with Luke’s formulation of the people’s words taken from Psalm 118:26, “Blessed is the king who comes in the name of the Lord” ( 19:38 ).

Those from whose lips “Hosanna” rose that day seem to have looked on Jesus as God’s anointed one from the house of David of whom the prophets had spoken and through whom they hoped that all their messianic expectations would be fulfilled. However misguided their particular expectations may have been, their actions underscore the theme of the Gospels that Jesus is indeed the promised son of David through whom the redemption announced by God’s prophets has come. In him the age-old cry, “Lord, save us, ” has become the glad doxology, “Hosanna, ” which equals: “Praise God and his Messiah, we are saved.”

Most likely the authors of the Gospels transliterated “Hosanna” rather than translating it because it served on the people’s lips as a joyful exclamation which, if translated, would have sounded like a prayer. In similar fashion, John transliterated “Hallelujah” in Revelation 19:1, 3, 4, 6 because it had become an exclamation of praise whereas originally it was a call to praise (“Praise the Lord”).

Bruce Metzger on the shorter ending of Mark