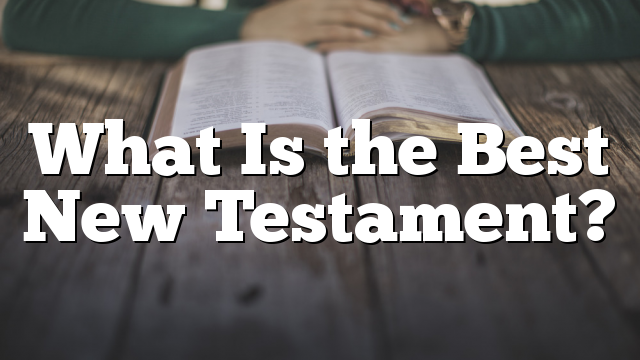 What Is the Best New Testament?

The ranking of these translations was based originally on the translator’s own statements as to their source; but this has been checked and corrected by a test as to the relationship of each one of these translations to –two forms of the Greek Now Testament-tthe Westcott and Hort text and the Textus Receptus or Received Text. I carried out this test for the entire content of the Gospel of John. In this gospel the two Greek texts were compared verse by verse; and, from the large list of differences noted, sixty-four passages were selected in which even the freest English translation must show which of the two Greek texts it supports. These sixty-four passages are cited at the end of this chapter. The two forms of the Greek texts were selected as being generally re­garded by scholars as the best or most accurate text in the case of Westcott and Hort, or the worst or most corrupt text in the case of the Textas Receptus. The ranking of the

How Accurate Is Your New Testament? Page  87

translations would not be changed appreciably if Tischendorf or Nestle were substituted for Westcott and Hort. The contrast between any modern scholarly edition and the Textus- Receptus would have the same proportions. On the basis of this assumption each of the seventeen translations

was tested in sixty-four passages in the Gospel of John, and the resultant agreements with one or

the other of the Creek texts are presented in Table 1

What is the Best New Testament: Colwell’s Apparatus
Colwell’s apparatus was taken from his book, “What Is The Best New Testament” University of Chicage Press, 1951.
Colwell’s Rule of Bible Translations
Versions in bold italics are those Colwell had printed, the others are added by me using the same criteria.

You Can get help with Dates from the Publishers Open– BiblePublishers.htm—-For helpful suggestions on that.

Sbt—Compares all Bibles With the List in BestBiblesPlus.htm—They are there for You to