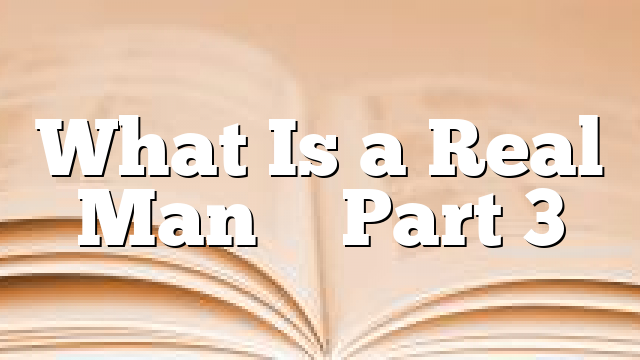 [Here’s some real meat and deep truth for men who have the courage to accept the challenge” is what I wrote when I posted the first part of this article about The Lonely Man, then Part 2 on June 10, The Passive Man. The challenge still stands. Here’s another short excerpt, revealing some significant truths. Every man should read this whole message and take it to heart. It will be life-changing for anyone who does. Before reading the passage below, go back and read the first two installments. – Ray E Horton]

A weak man looks for ways to defend himself. And since all men are weak, all men look for weapons to defend themselves. Anger is often the weapon of choice. Angry men react in one of two ways – attack or retreat.

Saul was a weak man. He led one of the most powerful nations on earth, but he lost his grip on God and he felt threatened by young David’s presence in the palace. So, Saul defended himself (his fragile ego). Like a deranged yellow jacket out of hell, Saul tried to pin David to the wall with his spear (I Samuel 18).

Unrighteous anger intimidates and eliminates the threat. It keeps people away. It keeps the soul locked up

Unrighteous anger kills. It intimidates. It eliminates the threat. It keeps people away. It explodes. It keeps the soul locked up. Attack works – for the moment. Angry men can also retreat. Retreat allows rage to go underground. The weapon is silence. The weak ego is shielded in isolation.

I’ve used both tactics. I’d be a wealthy man if I had a dollar for every time I’ve tried to intimidate my enemy or for every time I’ve withdrawn into the basement of my soul and locked the door behind me. Both maneuvers give me a sense of winning. But it doesn’t last. It’s a cheap victory because nothing really changes, and my soul continues to suffer.

What happens if the angry man stays angry? You’ll find out in the next installment, “The Addicted Man.”

You pray for healing and miracles and yet eat unhealthy. So why would God heal and do miracles if your not going to change…