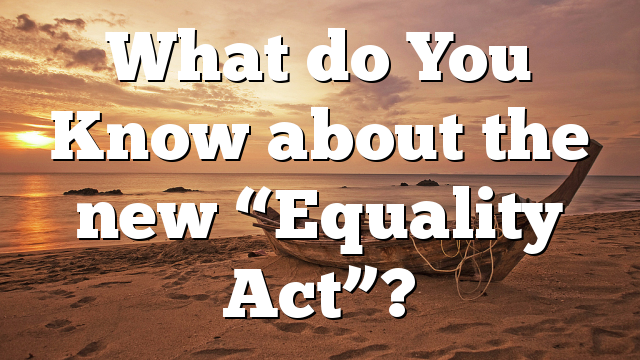 In March, members of the U.S. House of Representatives and U.S. Senate introduced the “Equality Act.”

And while it may sound nice to some ears, this bill actually poses a devastating and unprecedented threat to religious freedom and the progress that women have made toward true equal treatment in law and culture.

Let’s take a more in-depth look at this legislation.

What is the “Equality Act”?

The “Equality Act” – in its simplest form – adds “sexual orientation” and “gender identity” as protected classes to already existing nondiscrimination laws. This would prohibit employers, individuals who rent out apartments in their homes, preschools, and even religious schools and organizations from making choices based on basic biology, bodily privacy, and their beliefs about the nature of marriage. It would apply to every single recipient of federal financial assistance (including every public school and almost all colleges and universities.) And though “nondiscrimination” sounds good in the abstract, in practice this law poses a serious threat to women’s rights and religious freedom.

How would the “Equality Act” threaten women’s rights?

In Alaska, the city of Anchorage is using a similar law to force a women’s shelter to allow biological men who identify as women to sleep just three feet away from women who have experienced rape, sex trafficking, and domestic violence. The “Equality Act” would also open up shower facilities, restrooms, and locker rooms to members of the opposite sex in schools – as has already happened in Pennsylvania in the Boyertown Area School District.

In Decatur, Georgia, a young girl was sexually molested in her school restroom by a boy who was allowed in as a result of the type of policy that the “Equality Act” would force on the whole nation.

At a Connecticut state track meet, two biological males identifying as girls beat out the female competitors in several events, taking first and second place. In fact, these males have taken medals from girls in meet after meet. As one girl said, “Why even try?” In Alaska, the same happened – a biological male competed as a girl at the state championship and won.

How would the “Equality Act” threaten religious freedom?

The “Equality Act” would threaten individuals, business owners, and non-profit organizations that simply want to live and work according to their faith by forcing them to express messages or promote events that violate their deeply held religious convictions.

It also would forbid churches and religious nonprofits from requiring their employees to live out their religious beliefs about marriage, sexual morality, and the distinction between the sexes. They would be required to open their sex-specific facilities to members of the opposite sex. For one Massachusetts church, that would mean it would have to open its women’s shelter for victims of domestic violence to biological males.

The “Equality Act” would threaten religious foster care and adoption agencies with closure if they operate according to their beliefs that the best place for a child is a home with a married mother and father. In New York, the state is using a sexual orientation, gender identity regulation – similar to the “Equality Act” – to shutter the adoption services of New Hope Family Services, which has been placing children in loving homes for over 50 years.

It would threaten creative professionals and other business owners who simply what to live and work according to their beliefs. Promotional printer Blaine Adamson respectfully declined to create shirts with a message promoting an LGBT pride festival, while offering to connect the customer to another printer who would create the requested shirts. The customer then filed a discrimination complaint against Blaine, and a local human rights commission ordered him to undergo diversity training.

The “Equality Act” would also force individuals to speak messages that violate their beliefs under the threat of punishment. Dr. Nicholas Meriwether was punished by Shawnee State University for declining to refer to a male student by female pronouns. He offered to refer to the student by first or last name only, in order to respect both the student and his own beliefs, but this did not satisfy the University, which still punished him.

What about the Religious Freedom Restoration Act (RFRA) – doesn’t that provide some protection for these groups?

If you’re not already concerned about the scope and reach of the “Equality Act,” here’s another issue.

In the past, similar proposals have claimed to respect the concerns of the religious community and the LGBT community, offering a few narrow exemptions for religious freedom. But the “Equality Act” offers no exemptions for religious freedom. In addition, the bill would forbid religious individuals and organizations even to invoke the Religious Freedom Restoration Act. The faithful would be virtually powerless in the face of a bill designed to punish them for living out their beliefs.

The Bottom Line: Laws must respect freedom and promote justice for every citizen, no matter who they are. A society that protects everyone’s freedom to peacefully live according to their beliefs promotes an environment of mutual respect among Americans from all walks of life. But that is not what the “Equality Act” does. Instead, it threatens Americans’ fundamental liberties. And that is something no American should stand for.

Response to Questioning of the Atonement – Ray E Horton [A Facebook friend who is an unbeliever wrote: “I have so many doubts myself…